A few years ago we set out our vision for AlbertaSat, and one was to make Alberta a leader in spacecraft engineering and science, and we have absolutely accomplished that. 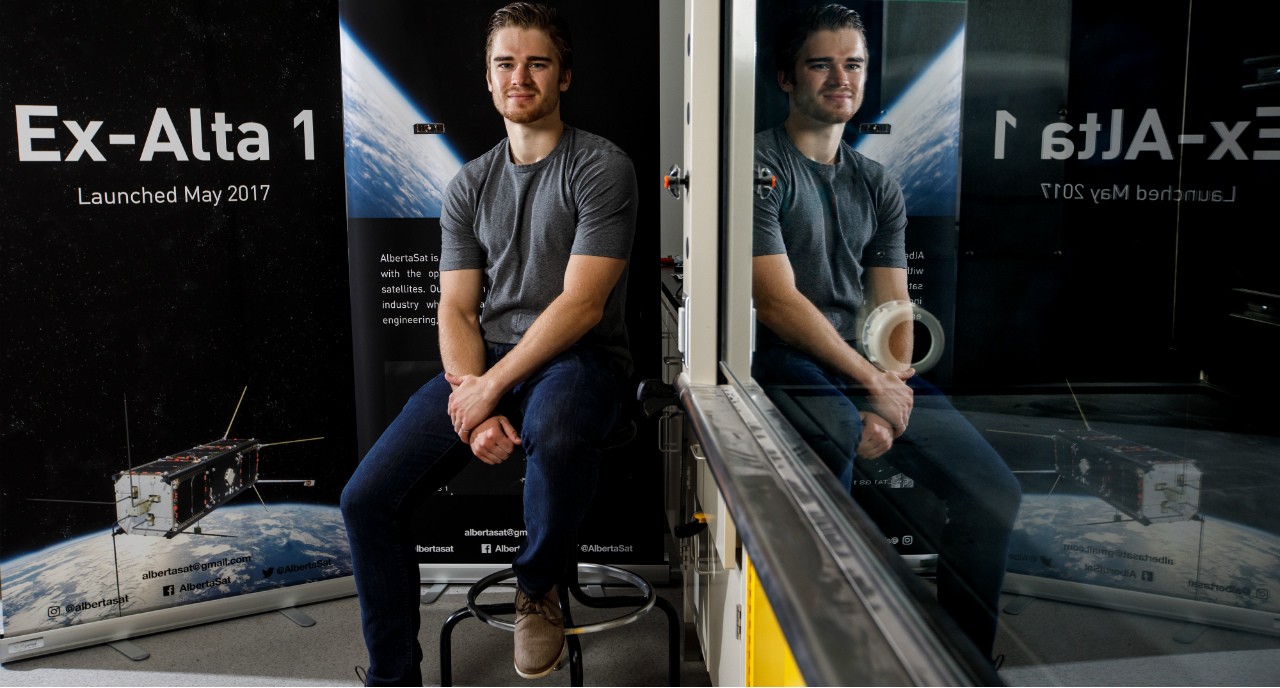 U of A engineering grad Tyler Hrynyk has already landed a job with a satellite startup in the Netherlands, thanks to his work with the AlbertaSat team that designed, built and launched Ex-Alta 1, the province's first space satellite. (Photo: Jason Franson)

In his first week of university, Tyler Hrynyk joined a student team dedicated to building satellites. Now, with a freshly minted engineering degree, he’s joining one of the world’s most successful space startups.

“I joined the AlbertaSat team because I thought it would be a cool, fun distraction,” said Hrynyk. “Little did I know I would become one of the project managers and that I’d be flying the spacecraft.”

Hrynyk’s role with AlbertaSat grew over the years, as the student team designed and built a small cube satellite. Last April, when the University of Alberta-built cube satellite dubbed Ex-Alta 1 was launched, Hrynyk was in charge of controlling and communicating with it.

“It changed the course of my career.”

Hrynyk had imagined he would work as a mechanical engineer in the oil and gas sector, like many in his family.

“There are a number of engineers on my mom’s side of the family, and on my dad’s side there are electricians and power engineers, and they all worked in oil and gas,” he said.

“But I joined AlbertaSat at a perfect time to be part of the Ex-Alta 1 launch, and then go on to a leadership position on the team, and we won the Canadian Satellite Design Challenge. And now at the end of my degree, I’m so well-rounded, I’m able to move directly into the space industry.”

Later this summer, Hrynyk will begin working at a job created for him at Innovative Solutions in Space, a Netherlands-based startup that was also a service provider to AlbertaSat’s Ex-Alta 1 project.

The launch of Ex-Alta 1, Alberta’s first foray into the space industry, was part of QB50, an international project in which 50 cube satellites built by students around the world were launched.

“Ex-Alta 1 has been functioning much more reliably than any other satellite (in the project),” he said. “And we took Ex-Alta 1 to Delft (in the Netherlands) and left it at the company’s facility there, and they were very aware of our satellite and our team’s success.”

Innovative Solutions in Space, a spinoff from the Technical University of Delft, deals predominantly with small satellites—it manufactured the metal frame Ex-Alta 1 was built around. The company has more than 2,000 satellites in orbit.

Hrynyk credits his success and job offer to the success of the AlbertaSat team and its members.

“I owe this to everyone else I worked with. Everybody on the team owes something to everybody else,” he said. “This project was very hands-on, and getting this job would not have been possible without the students I was working with, who built the satellite and the ground station.

“Collin Cupido and Charles Nokes did the majority of work building Ex-Alta 1 in the clean room, and if they had made even one mistake and the satellite didn’t work, I would never have been able to fly the satellite and get this job. It’s very much a community-based thing.”

He and the team also take pride in the fact that they are helping the university carve out its place in space engineering, science and technology.

“A few years ago we set out our vision for AlbertaSat, and one was to make Alberta a leader in spacecraft engineering and science, and we have absolutely accomplished that. We get emails every day from teams around the world asking us for advice because they know the success we have had,” he said.

“At the university level, in terms of building here in Alberta—we are becoming the hub in Western Canada.”

AlbertaSat was recently awarded funding from the Canadian Space Agency to design, build and launch another cube satellite in 2020, and is collaborating with Yukon College in the Yukon and Aurora College in the Northwest Territories.