Post-doctoral fellow one of few Canadians selected to attend the Lindau Nobel Laureate Meeting in Germany. 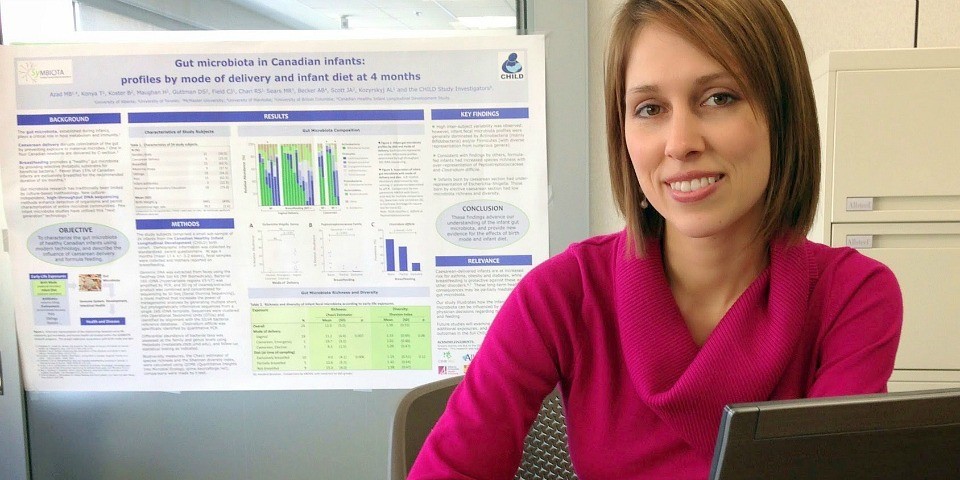 Meghan Azad is one of just a handful of researchers in Canada chosen to learn from dozens of Nobel Laureates at the Lindau Meeting in Germany.

Meghan Azad still seems shocked by her good fortune. In 2010, she was left stunned after meeting a Nobel Laureate while completing her PhD. “I was just completely amazed by his lecture. And then afterwards he approached me to discuss my own research, and I could barely speak.”

The encounter turned out to be career-changing for Azad, inspiring her to continue a path in research. Now, the University of Alberta pediatric researcher is about to meet dozens of Nobel Laureates, after being chosen as one of the world’s most promising young scientists. She is one of just a handful of Canadian-based researchers selected to attend the Lindau Nobel Laureate Meeting in Germany, from June 29 to July 4.

“It’s going to be really far-reaching to hear first-hand about so many revolutionary Nobel-winning discoveries. And there’s also going to be a series of panel discussions about the future of medicine and physiology and what these bright minds see for the future, in terms of key areas of research and progress.”

It's not a stretch to call the honour a chance of a lifetime, allowing Azad to collaborate with world-renowned scientists and some of the planet’s top young minds who are following in their footsteps. Her journey to the prestigious meeting began with her joining Anita Kozyrskyj’s CIHR-funded SyMBIOTA (Synergy in Microbiota) research team in 2011 at the U of A’s Faculty of Medicine & Dentistry.

“She was there at the very beginning,” says Kozyrskyj of her protégé. “This is a new field for many, so we were learning from each other.”

In just a few years, their work has already received international acclaim. SyMBIOTA is an offshoot of the Canadian Healthy Infant Longitudinal Study (CHILD, funded by AllerGen NCE and CIHR), which is examining more than 3,000 families across Canada to learn how both genetic and environmental factors influence children’s risk of developing asthma and allergies. SyMBIOTA, in turn, is using the data collected in the CHILD study and the genetic sequencing expertise of national colleagues James Scott (co-principal investigator with SyMBIOTA) and David Guttman to understand the role of bacteria living in infants’ guts, known as the gut microbiome.

Azad explains, “We’re interested in knowing firstly how the microbiome forms during infancy. So what factors in early life are influencing it? And then beyond that, we are asking how those changes influence future health.”

In a paper published in 2013, Azad and Kozyrskyj found that babies delivered by Caesarean section hosted different bacteria compared with babies who were born vaginally. They also found different beneficial bacteria in babies who were breastfed. Beneficial bacteria play a critical role in helping develop an infant’s immune system. The SyMBIOTA team will soon publish new findings, looking at how antibiotic use in mothers and their babies affect the development of the gut microbiome.

“Antibiotics are designed to kill the bacteria that are making us sick,” says Azad, “but they also influence the good bacteria, or the friendly bacteria, in ways that really haven’t been appreciated fully until now.”

The research has helped Azad be recognized on the international stage. Her mentor, Kozyrskyj, says the invitation to meet with the Nobel Laureates is an honour for the entire research team, and well deserved for Azad.

“We’re all thrilled for sure. She’s really been a super post-doc. It couldn’t have gone to a nicer person.”

As for Azad, she says none of the accolades would have been possible without the help of those around her. “None of this could have been done by one person. I have a really great team supporting me and I would like to acknowledge them.”