David Cheriton gives grads an inspiring lesson in the value of passion, persistence—and even self-doubt. 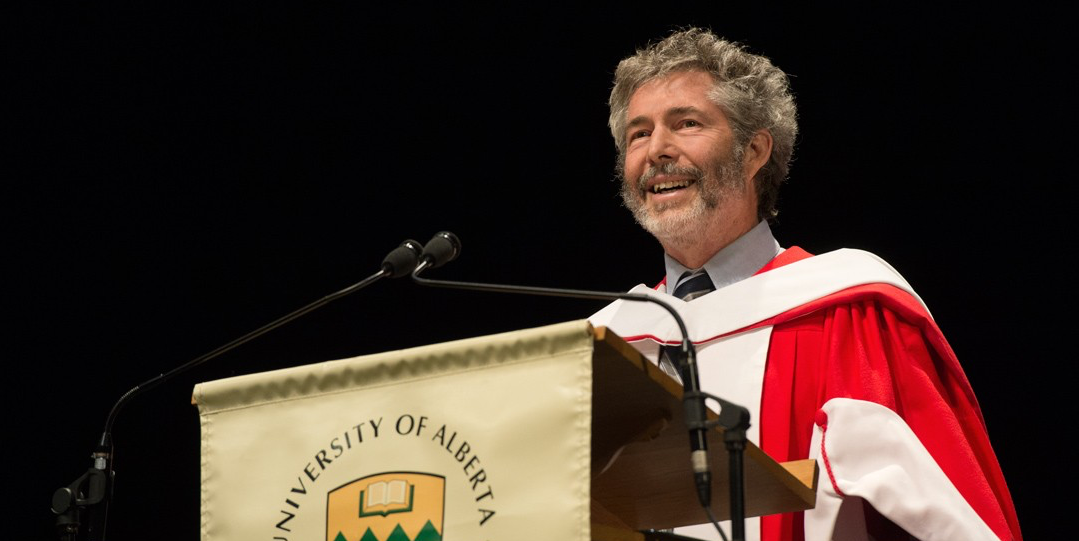 (Edmonton) If there’s one thing David Cheriton wanted today’s graduating class to know, it’s how much he “screwed up” on the path to a successful career. To start with, he dropped out of the University of Alberta 43 years ago with “crappy grades” and before that was rejected from the music program, his first course of study.

He did finally earn “a bunch of degrees,” said the Stanford computing science professor to graduands in the health science professions, science and engineering at convocation Wednesday. But he advised his audience not to “look too closely at the transcripts.”

He also started companies that failed, invested in losing propositions and provided advice that “turned out to be laughably wrong.”

So you might be wondering, he asked, “besides what on Earth I am doing up here, why I keep trying to hit the ball when I miss or foul so many times.”

Even when Larry Page and Sergey Brin approached him to help fund a new company called Google, Cheriton was convinced it was only because he’d “accidently” been involved in a successful startup company the year before. But what keeps Cheriton swinging are two things: first, a passion for computers inspired by his Grade 10 math teacher, Mr. Probert, at Eastglen High School in Edmonton, who told him in 1967 that “computers are the future”; and second, the countless academics and tech-heads who “infected” him with their own enthusiasm and drive.

A computing science professor at Stanford University, Cheriton has helped revolutionize the Internet as a serial tech-company founder, industry mentor, angel investor and philanthropist. Raised in Edmonton, the former U of A undergraduate has focused his research on high-performance scalable distributed systems, Internet architecture and protocols, and hardware-software interaction, particularly at the operating system level.

His work has made a number of early contributions to the development of the Internet, and his students have been instrumental in a number of Internet developments and companies in the tech sector. He has been an active investor providing seed funding for important Silicon Valley companies, most notably Google.

“Any persistence I have shown in keeping going, after one screw-up after another, has really been aided by the passion for the field, in part instilled by the various people I have encountered along the way.

“I’ve experienced, and really gotten addicted to, the ‘high’ of managing to hit the ball after many, many misses. I keep seeking that high.

“I recently read an article that claimed that many successful people secretly view themselves as a bit of a fraud; they ‘know’ they are nowhere near as competent as people think they are. I can relate. I used to think that ‘learning by doing’ just applied to school—it has been the story of my life.

“On the other hand, I’ve encountered lots of people along the way who are far more impressed with themselves than I am with them. I find these people inspiring too. They inspire me to do better, because if they can do it, so can I. In fact, I should be able to do better.”

Cheriton finished his address by reminding graduands that a healthy dose of self-doubt goes a long way in life.

“So, as you sit there with your freshly printed degrees that your family proudly thinks you have earned, I hope you feel insecure and incompetent and even unprepared. But, at the same time, I sincerely hope that you have met the right people, developed a powerful passion and learned the persistence to power you through future challenges, on to success that will truly honour the education and the degree you receive here today.

“If I can do it, I am confident that you can too.”