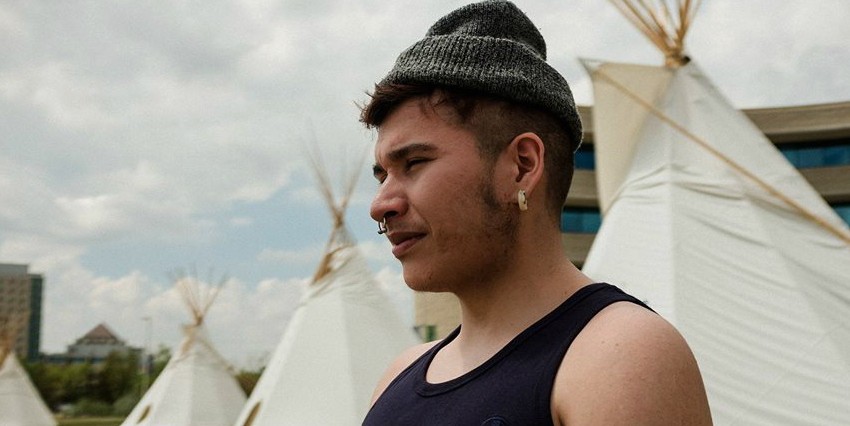 Billy-Ray Belcourt, a doctoral student and Rhodes Scholar at the U of A, won Canada's top poetry prize Thursday for his collection "This Wound is a World." (Photo: Tenille Campbell)

Belcourt’s This Wound is a World was chosen from three Canadian finalists at a ceremony in Toronto Thursday night. American poet Susan Howe was also chosen in the international category. Both winners will take home a total of $75,000.

While the prize comes as a powerful endorsement of his creative talent, Belcourt said the recognition has only made him more determined to “push towards the political goals that I have…. I see it all as an incentive to be more purposeful about how I pay back communities.”

And in addition to “boring things” like paying off his car loan, he said the prize money will go towards helping his family financially and perhaps supporting young poets.

"I'm interested in supporting emerging Indigenous, queer and trans writers,” he said. “How might I contribute to the democratization of the publishing industry, or set up opportunities that would bring those writers who have pressing stories to tell into the literary world?"

This Wound is a World, published by Calgary’s Frontenac House, was partly written while Belcourt was at Oxford University on a Rhodes Scholarship in 2016-17. It is an honest and raw account of growing up gay and Indigenous in Western Canada.

Billy-Ray Belcourt recites a poem from This Wound is a World.

“Blending the resources of love song and elegy, prayer and manifesto, Billy-Ray Belcourt’s This Wound is a World shows us poetry at its most intimate and politically necessary,” write the Griffin jurists in their assessment of the book.

“Between its bold treatment of sexuality and wary anatomy of despair, [Belcourt’s poetry] peels back the layers of feeling and experience to offer, finally, the glimmerings of hope.”

Just last week, Belcourt also received a 2018 Indigenous Voices Award, which comes with a $5,000 cash prize, for “most significant work of poetry in English.”

“I think because the book is deeply emotional, readers are affected by it,” said Belcourt.

“Sadness and hope are at the core of the book, and those emotions aren't exclusively Indigenous or queer—they're universal aspects of the human experience. So even if they aren't Indigenous or queer, people can enter into the text in a way that reflects their experiences."

Raised by his grandmother on the Driftpile Cree Nation reserve in northwestern Alberta, Belcourt came to the U of A to study comparative literature. He became an advocate for LGBTQ and Indigenous communities, and served as president of the U of A’s Aboriginal Student Council.

In 2015 he became the first-ever First Nations student from the U of A to win a Rhodes Scholarship. He is now pursuing a PhD in the Department of English and Film Studies, where he plans to examine what he calls the “Indigenous paranormal” in art, poetry and film produced by Canada’s First Nations.

Given his recent success with creative writing, however, he said the project will likely push the boundaries of conventional academic writing.

"I'm thinking now that my dissertation will be more of a creative/theoretical hybrid, and that I won't try to remain in the position of the conventional academic.

"The work will be more autobiographical."