Alanna Fittes was a standout with the U of A Pandas in what may be the greatest season in women’s U Sports rugby history. Now she’s set to make an equally impressive mark as a coach. 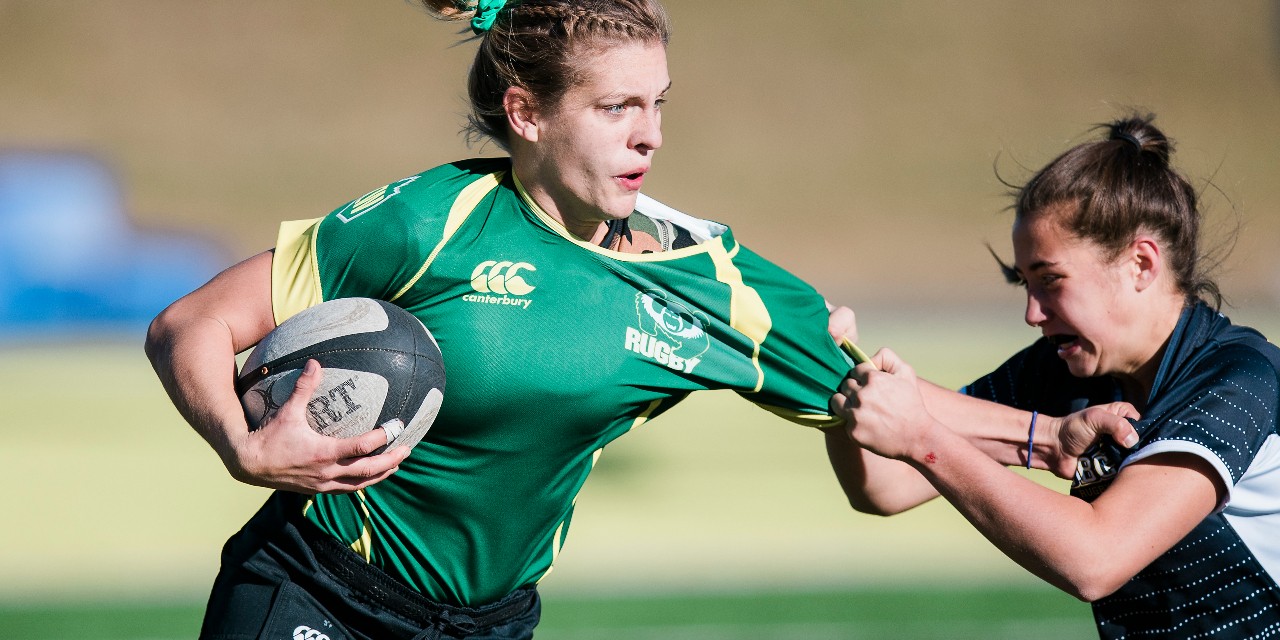 Alanna Fittes on the field during her final season with the U of A Pandas in 2018. Fittes, who graduates June 12 with a master's degree in coaching, helped rewrite the rules of youth rugby in Canada to make it more accessible to everyone. (Photo: Don Voaklander)

When Alanna Fittes suited up for her final season as a member of University of Alberta Pandas rugby team in 2018, it dawned on her that she had, at some point over the last decade, coached half of her teammates.

“There I was, back on the team again, which was amazing, and I was the principal instructor of a U of A rugby course, and two of my teammates were taking the course,” said Fittes, who graduates next week with her master’s degree in coaching, 11 years after first coming to the U of A as a non-playing rookie in 2009.

“It felt like I had played in the program my entire life.”

The 2018 incarnation of the team, according to Fittes, was as talented as the Pandas teams she had played on years earlier but inexperienced. Coming back for this final year, she said her role was to help develop the team and to bring a winning mentality.

“I felt like we were successful in that way,” she said of the spirited season filled with mostly moral victories. “But the year really showed me how much I value coaching and how I believe I have taken the right path.

“Still, you always want to win, so it was hard to come back, especially since I had such a fairy tale end to my first time with the team while getting my undergraduate degree.”

Growing up in Rimbey, Fittes’ first love was soccer, but the high-school rugby coach thought differently.

They all agreed she could manage both.

“When push came to shove in Grade 12, I decided that I wanted to go to the U of A and I wanted to really follow rugby and go that route,” she said.

Fittes’ initial academic interests at university were maybe physiotherapy, possibly teaching. The teaching part began to win out thanks to some sports administrative classes. She found she liked coaching.

While practising and playing for the Pandas, Fittes managed to trade her cleats for a clipboard as coach for Harry Ainlay High School’s senior girls team in 2010 and 2011.

“I was taking my experience as a player and the knowledge gained from my Pandas coaches and sharing them with youth athletes,” she said. “Really, I was just thrown into the fire and took any available opportunity.

“But that's when I realized I loved coaching.”

On the field, her initial years with the Pandas taught her some lessons about patience. In each of her first three seasons, including 2009, when she just practised with the team, Fittes’ Pandas would be dumped in the Canada West final by a rugby dynasty in the making out of Lethbridge.

Still, there was reason for optimism. The now battle-tested Pandas were young, while Lethbridge was slowly bidding farewell to a generational crop of exceptional athletes that included future senior national team members and Olympians.

Fittes herself was coming into her own as an elite fullback, having been named as a Canada West all-star in just her second year as a starter. In fact, 2012 was shaping up to be Fittes’ breakout year, when a torn ankle ligament ended her season even before it began.

“I was devastated,” said Fittes, who cheered her team on as they finally won the west only to lose in the first game at nationals. “It was pretty heartbreaking to watch my teammates go through so much and then fall short.

“But the dam had burst.”

Fittes cleared her busy coaching and playing plate to focus on rehab in 2012 and a do-or-die 2013 Pandas campaign.

“It’s hard to describe, but going into that season I felt like we were professional athletes,” said Fittes. “We decided we weren't happy with getting bronze, and we had to win this year, there was no other option.”

Her Pandas put together arguably the greatest single season in women’s U Sports rugby history. No game was closer than 17 points in a season that featured unfathomable blowouts and included a 27-10 win over Calgary in the Canada West final and a 29-10 victory over Guelph in the national final.

“All I remember about that final was it was freezing cold and my only job was to not let anyone past me,” she said. “I remember doing a lot of tackling.”

Her efforts ended in a championship and a finals MVP. Her 63 points scored during the season was more than double the conference’s next highest scorer.

“That season, we were a runaway train.”

Then came the 2014 campaign, which was perhaps Fittes’ best. She was named Canada West all-star for a third time, and added Canada West MVP and all-Canadian to her resume. The Pandas bested Calgary to win the west, but never got on track at nationals and lost all three games they played.

“We were ready to win, but it was different in 2014,” she said. “We had a younger team with fewer people who had been to nationals, so there was just a little bit more nerves.

“If I could redo the tournament, there's a few things I would change, but in the end it's just a learning opportunity.”

From injury to opportunity

Prior to her triumphant return to the Pandas in 2018, Fittes graduated with a bachelor of physical education and recreation in sport performance in 2015 and managed to play—and coach—her way into Canada’s various national rugby streams representing Canada and Alberta at competitions around the globe.

Unfortunately, in the summer of 2016, the injury bug caught up with her once again. After a Canadian developmental rugby team tour through Utah as a player followed by a coaching stint in Toronto with the Alberta Wolf Pack U20 women’s team, Fittes tore an anterior cruciate ligament (ACL) in her knee in a freak accident during practice.

“With that, all of my international sport dreams were immediately halted. I think my busy schedule finally caught up to me.”

Having already dedicated herself to coaching, Fittes said the injury gave her the opportunity to enter the Faculty of Kinesiology, Sport, and Recreation’s master of coaching program.

"I put all of my eggs into my coaching basket. And that has really taken off for me.”

As part of the MCoach, Fittes participated in a practicum with Rugby Canada and Rugby Alberta to review the youth laws of the game and create the most enjoyable and age-appropriate version of rugby that allows players of every shape, size, gender, age, ability and skill level to participate.

“Our main focus for these law variations was to create a game where everyone gets to play, gets to touch the ball and gets to score,” she said. “It was really cool to see because these laws were implemented through all of Canada.”

Although the MCoach is course-based, Fittes treated the capstone research project like a thesis. For her study she interviewed four female, high-performance rugby professional coaches in an effort to challenge taken-for-granted assumptions that authority, competence and leadership are intimately linked with masculinity.

“It was an examination of femininity, masculinity and what it means to be a leader in the world of high-performance rugby union,” she said.

Fittes said there were three distinct yet overlapping themes of her research: how the women’s early coaching and playing careers influenced their future coaching practices, their experiences as women in a predominantly male profession and the reasons women coaches choose to stay or leave the masculine space of rugby coaching.

“My findings made it clear that the feelings and experiences of these coaches do not occur in isolation,” she said. “The main message was women who coach aren't alone, but we need to band together and need to be a community to keep going forward.

“She reminds me of myself a bit; she understands players and how to get through to them,” said Randi Ross-Hamre, who coached Fittes as an assistant coach with the Pandas from 2011-13 and as a head coach at the club level in Edmonton off and on for years.

Ross-Hamre was also head coach of the 2016 Alberta Wolf Pack U20 women’s team that was suddenly left without an assistant coach just days before the national championships in Toronto. After going back and forth over some possible replacements, Ross-Hamre told Rugby Alberta she would not coach the team unless she had a female coach, and that coach was Fittes.

“She's good at understanding and working with the players, and when you play at high levels yourself, you start to understand what players need because you've been through that,” said Ross-Hamre. “She's worked really hard to get where she is. It didn’t come easy to her, and so that helps her identify with players that are struggling with understanding or competing at the top level.”

Looking ahead, Fittes said she is ready to take on any and all playing and coaching opportunities that might arise.

In the meantime, she’s moved back to central Alberta and, like everyone during this time, waiting to see what the future holds. Fittes said she is looking for ways to get her capping project published and is toying with the idea of pursuing a PhD.

“What I know for sure is that I am passionate about coaching and that graduating from the MCoach is a launch pad for my career,” she said.