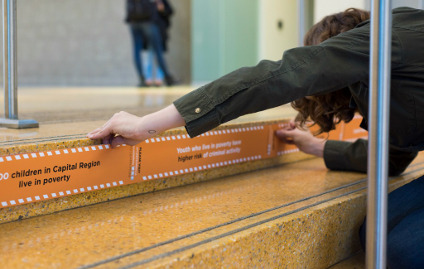 The stairway ribbons feature messages related to the U of A's United Way campaign.

Stepping up their creative game

What happens when you tell a group of design students that your fundraising theme is all about stepping up? For the team from UAlberta’s Student Design Association, they might just take you at your word. 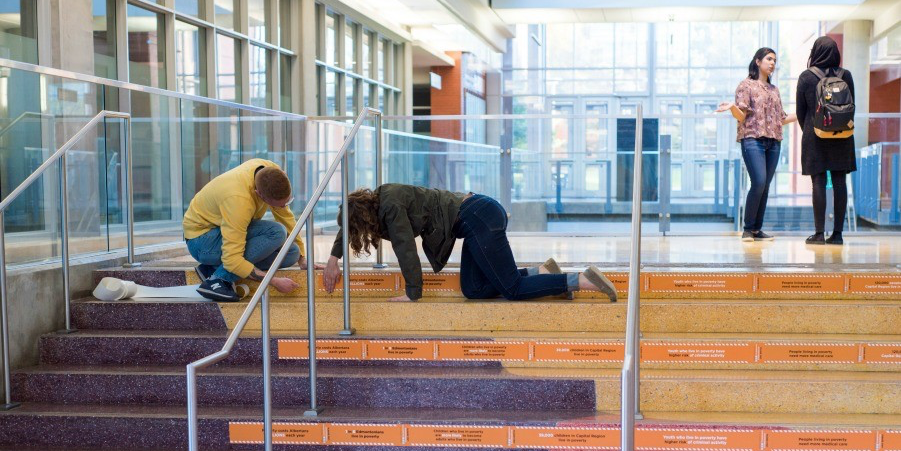 Student Design Association team members Matthew Carr (left) and Cayley Lux install a United Way campaign ribbon on a stairway in the Centennial Centre for Interdisciplinary Science. The team came up with the clever idea after learning the campaign theme was "Stepping Up." (Photo: SDA)

For the creative minds of the Student Design Association executive, being asked to work with an outside partner on a project is nothing new. The association, which represents all students taking design classes at the U of A, often collaborates with external organizations to create work that features student design talents while supporting the community.

But this year’s United Way campaign offered a chance for the students to take on a creative project right on campus. Working with University Relations initiatives lead Darlene Bryant and the United Way campaign team at the U of A, they decided to create an installation that would grab the attention of busy students and staff to support participation in the university’s annual fundraising campaign.

Daria Nordell, SDA director and fourth-year visual communication design student, says the university’s campaign theme, Stepping Up, was the inspiration for the final product—one that would use staircases to engage students with the United Way’s message.

“They’re something students use every day, something that people see all the time and are very visible in lots of the buildings,” Nordell said, “but they’re never really a place for engagement.”

The challenge: include but don’t intrude

Nordell explains that, as designers, her group has to walk a fine line between engaging an audience and being too intrusive.

“From a design perspective, you have to be invisible in some senses and very visible in others. You shouldn’t have to think about it. It should just be there and be obvious and open and engaging and accessible to people. You can’t be too in your face or you turn people away or disengage with your audience.”

With all those considerations in mind, the team designed a set of ribbons—strips that adhere to the steps to catch pedestrians’ attention, something Nordell feels reflects the campaign message.

“You’re already navigating those obstacles. It’s interesting to add in another element of how can we use those stairs metaphorically as well.”

Not only does the project help the United Way, but it also helps the Students’ Design Association continue to do its work. The group undertakes projects like this as a fundraiser for the organization, allowing it to cover the cost of running the association and its events.

This work reflects the association’s core mission and vision, including giving back to the community and engaging students in meaningful ways. As Nordell points out, “Where better to give back than people in need?”

Nordell said, “Our specific skill set makes it easy for us—we don’t just have to do bake sales. We can give back with design and also earn some money for our group so we can hold other events.”

The opportunity came to their attention through staff member TJ Jans, who works as part of the marketing team for the U of A’s fine arts programs.

“Darlene Bryant contacted me looking for ideas for this year’s campaign. I had just previously met with Daria and was impressed by how passionate and idea filled the Student Design Association’s plans seemed to be this year,” said Jans. “It seemed like the perfect fit to connect the SDA and Darlene. I had a feeling the SDA’s collective creativity would be able to create a unique United Way campaign.”

A step in the right direction

SDA external liaison Rachel Killoh took the lead on the project. “She did the mockups and renderings and the ribbon design itself,” Nordell says. “We collaborated to bring it into reality, which is pretty typical on most design projects and pretty typical of what goes on in the department.”

Nordell says working with Bryant on the campaign meant a lot to the students in the group.

“It was great to work with her in this smaller community but then know what we were doing was impacting everyone else—everyone in the city, basically.”

For the future, Nordell thinks the project could be picked up more broadly now that it’s been developed.

“There’s no reason why this couldn’t be implemented on any staircase if it’s a method or form that they like and they find valuable. It’s so engaging, and we really struggle with finding the balance between intruding and including.”

In the end, Nordell said, it was powerful to be reminded that the work of their team connects to real people, something that became clear when representatives from the group attended the United Way kickoff lunch this fall and heard from people whose lives are made better through the agency’s work.

“I think we’re kind of removed from it, and especially in design, sometimes it’s hard to keep reminding yourself that this is for a specific purpose and not just plugging things out. For the students, for the executive team, it was wonderful to see a direct effect from what we were creating.”

Look for the ribbons on staircases around campus this fall.

Stepping up their creative game
Newsroom