Sticky research that Spider-Man would love 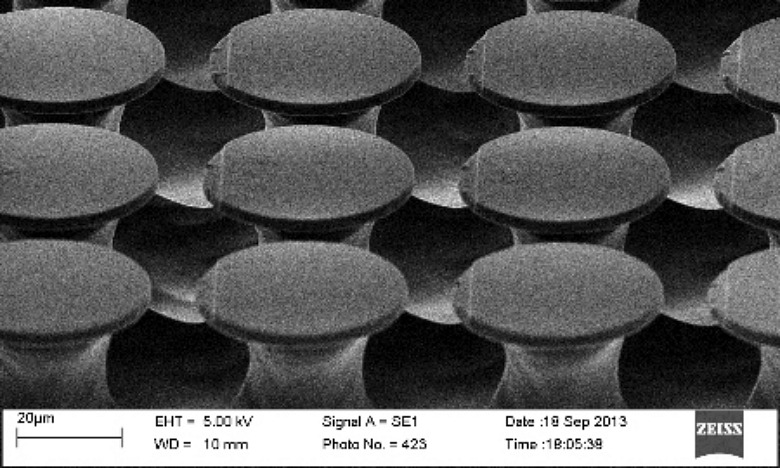 131105-sameoto-adhesive-banner
A microscopic image of the adhesive material manufactured in mechanical engineering researcher Dan Sameoto’s lab. The scored lines on the left side of each cap are an intentional defect built into the cap, enabling the tips to stick to a surface strongly in one direction and peel off more easily when pulled in the opposite direction.

(Edmonton) A team of University of Alberta engineering researchers are developing new adhesives inspired by a gecko’s foot that have directional stickiness. Think of Spider-Man scaling the side of a building and you’ve got the picture.

Mechanical engineering professor Dan Sameoto and his research team recently published findings from their research in which they turned flaws in previous experiments into a huge advantage. The result is an adhesive strip that sticks more when pulled in one direction than in another. It’s effectively tape that sticks strongly to a surface when you push it in one direction and slips off when you push it in the opposite direction.

Sameoto and graduate student Walid Bin Khaled are conducting research in a field of adhesives inspired by the foot of the gecko. The bottoms of the tiny lizard’s feet are covered with millions of tiny hairs with a triangular end, which allow it to climb up walls and across ceilings. Like a gecko’s feet, the adhesives Sameoto has been researching for years have tiny stalks, like hairs, that can connect time and again with a variety of surfaces without leaving residue.

In recent years, researchers have discovered that by adjusting the stalks so they have an overhanging cap tip, they can increase the material’s adhesive strength. But when there are defects on these caps, the bond is broken more easily.

Sameoto and Khaled cleverly realized that if they intentionally introduced defects in the same place on each of the caps of all the stalks, they could turn the “defect” into an advantage and create a directional adhesion.

“We noticed that every time there was a defect in a cap, or a tiny speck of dust or anything on it, that was the site at which the adhesion would fail,” said Sameoto. “Then we thought, ‘Maybe we can control this.’”

Peeling a strip of the adhesive off of a glass surface in one direction, then another, Sameoto observes that “you can even hear the difference,” as the strip releases differently in opposite directions.

Applications for dry adhesives are far-reaching. For example, in the production of microelectronics, tiny chips are handled in high-tech clean rooms by workers who wear “bunny suits” and use tweezers to handle the chips. But robotics could get the same job done in a vacuumed environment instead of a clean room, using the dry adhesive instead of tweezers. The adhesive could also replace suction cups used in other applications—including work in outer space.

“Our adhesives can potentially be used in all these applications because they demonstrate reasonably strong normal adhesion strength with respect to the adhesives which were used for these systems,” said Khaled.

The team is also looking for ways to eliminate the build-up of static charge in the strips that occurs with some materials.

“It is less severe with the thermoplastic adhesives as compared with the pure polyurethane ones,” said Khaled. “We actually made a version of these adhesives using a polyurethane-carbon black nano-composite which is conductive and does not allow static build-up, and we are currently exploring some new thermoplastic materials which would be conductive or at least antistatic.”

The team’s research findings were most recently published in the journal Bioinspiration and Biometrics.