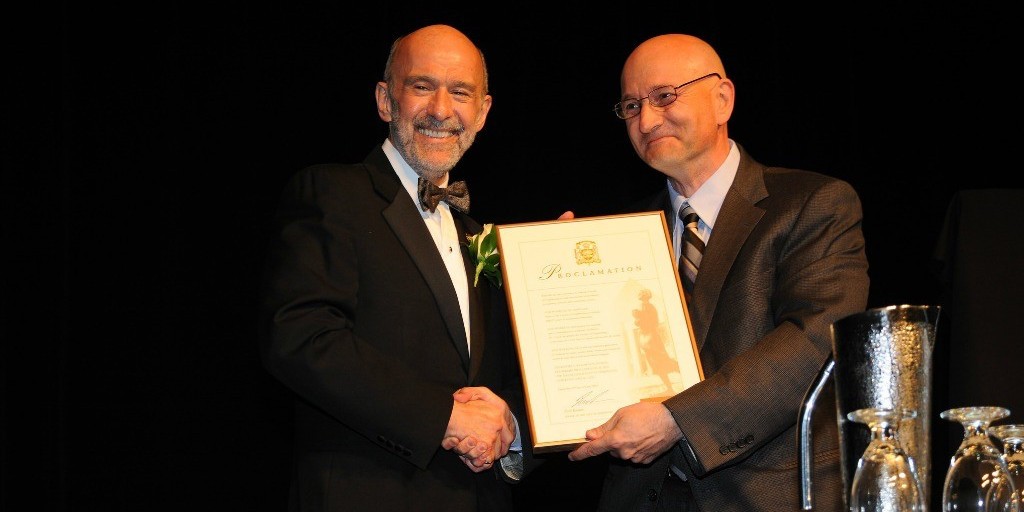 (Edmonton) There are many accolades to recognize the achievements of academics, but rarely do they involve mayoral proclamations. But outgoing University of Alberta dean of engineering David Lynch is being recognized by the city of Edmonton with a special honour.

By proclamation of Edmonton Mayor Don Iveson, June 30—which happens to be the final day of Lynch’s 21 years leading the U of A’s Faculty of Engineering—is David Lynch Day in Edmonton.

The honour was announced by city councillor Mike Nickel at a special event hosted by the Alberta Chamber of resources to celebrate Lynch’s contributions to engineering education and research, and his contributions to industry through collaborative research programs and public service.

Mayor's proclamations declaring special days, weeks or months are awarded to individuals and groups whose actions support betterment of society through education and charitable activities.

Lynch is closing his service as dean June 30 by opening a new building, the Donadeo Innovation Centre for Engineering. During Lynch’s tenure as dean, the Faculty of Engineering has added four buildings totalling 110,000 square metres of teaching and research space. The Donadeo Innovation Centre represents an additional 26,360 square metres of office space.

As the tallest structure on campus, the 14-storey building is a dominant feature on the U of A skyline. It will house 1,700 people—professors, graduate students and the university employees whose work supports engineering teaching and research. The building is also one of the greenest on campus—the university is aiming for a LEED Gold certification.

The building will have a profound impact on current and future engineering students. The Faculty of Engineering will convert areas that had been used as offices in existing engineering buildings into research and teaching facilities. This allows the faculty to accommodate increasing numbers of students.

The building will encourage interdisciplinary and innovative engineering and scholarship. For the first time, professors and graduate students from all engineering disciplines will work under one roof. A cultural shift will occur as they connect more frequently with one another. The eighth floor, called the Fred Pheasey Engineering Commons, is a focal point of the building where professors and students from all disciplines can gather to exchange ideas.

Lynch was initially appointed to a one-year term as interim dean in 1994, in the midst of devastating 21-per-cent funding financial cuts from Alberta government. But he looked far beyond the immediate challenges, drafting a plan that would see the Faculty of Engineering grow to one of the strongest in North America.

As of July 1, Fraser Forbes, who has served as the chair of the Department of Chemical and Materials Engineering for the past 13 years, will assume the office as interim dean of engineering.

Join the U of A in honouring the legacy of Dean Lynch with a gift to the David and Joan Lynch School of Engineering Safety and Risk Management.