A third of women with breast cancer die from metastasis and many thyroid cancer patients do not respond well to treatment. If we can improve the treatment of these patients, it will be a very big deal. 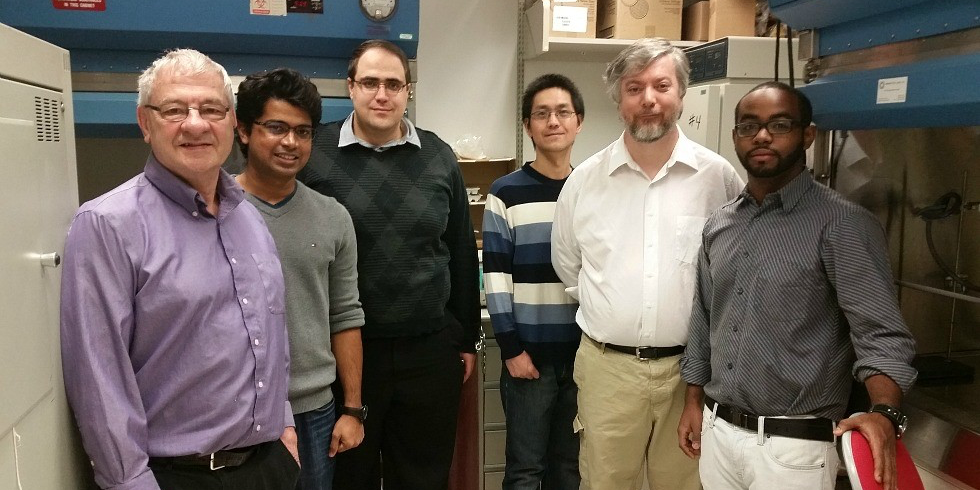 (Edmonton) Researchers from the University of Alberta have discovered a new approach to fighting breast and thyroid cancers by targeting an enzyme they say is the culprit for the “vicious cycle” of tumour growth, spread and resistance to treatment.

A team led by biochemistry professor David Brindley found that inhibiting the activity of an enzyme called autotaxin decreases early tumour growth in the breast by up to 70 per cent. It also cuts the spread of the tumour to other parts of the body (metastasis) by a similar margin. Autotaxin is responsible for producing lysophosphatidic acid, a signalling molecule that promotes cancer cell survival, growth and metastasis. It is also linked to resistance to the beneficial effects of chemotherapy and radiotherapy.

“Autotaxin causes a lot of serious problems in the treatment of breast and other cancers. Essentially, the body hijacks this enzyme to help a tumour grow, survive treatment and spread to other areas of the body,” said Brindley, senior author of a series of related studies. “By inhibiting it, we found we could block the growth of breast and thyroid tumours and break the cycle of treatment resistance.”

Autotaxin is normally involved in wound repair and tissue regeneration. It also drives inflammatory conditions such as colitis, arthritis and cancer. Brindley believes it is this inflammation-associated event that is especially problematic and could fuel breast and thyroid tumour growth.

According to Brindley, a tumour is like a wound that does not heal. The body hijacks autotaxin to help a tumour grow, resist being killed by chemotherapy and radiotherapy, and spread to other areas of the body. As the tumour grows or is damaged by treatment, it produces more inflammatory mediators, which in turn produce more autotaxin. That then increases the production of more inflammatory mediators. The research team found that it could block the growth of breast and thyroid tumours by breaking the vicious cycle with the autotaxin inhibitor.

Daily doses of the drug reduced the initial phase of breast tumour growth by 60 to 70 per cent in experimental models. The inhibitor compound also cut tumour metastasis to the lungs by a similar margin. Later tests with a different technique for blocking the effects of lysophosphatidic acid enabled the team to block breast and thyroid tumour growth and spread by up to 80 per cent.

Brindley said his team was surprised when Benesch discovered that autotaxin is produced not by breast cancer cells themselves, but largely by the surrounding breast fat tissue. As the tumour develops and causes inflammation in the breast, the fat tissue produces more autotaxin, aggravating the problem by making the tumour grow more, metastasize and resist further treatment.

“With this drug we are cutting this vicious cycle,” he said, explaining that by blocking autotaxin the researchers saw a fivefold reduction in inflammation markers in the blood, and a tenfold reduction in the breast fat tissue adjacent to the tumour.

The research team is now trying to promote the testing of the compound in human clinical trials in Edmonton—the first autotaxin inhibitor to make it to the clinic after more than 10 years of research. Brindley says that it shows it’s not a “pie in the sky” theory, but a potential new therapy that could be used in combination with chemotherapy to improve treatment of cancer patients.

“We’ve shown that the autotaxin inhibitor has strong therapeutic potential, even though we are at the early stages,” he said. “A third of women with breast cancer die from metastasis and many thyroid cancer patients do not respond well to treatment. If we can improve the treatment of these patients, it will be a very big deal.”

“This is a very exciting discovery on many levels,” said Liz Viccars, CEO of the Canadian Breast Cancer Foundation – Prairies/NWT Region. “We are very proud to have supported this work in Dr. Brindley’s lab with a CBCF-funded research grant, as well as supporting Dr. Tang’s contributions through one of our inaugural fellowship grants.

“This discovery is an exceptional demonstration of fundamental basic research potentially leading to the development and implementation of personalized cancer therapies and treatments. The impact of such findings will improve the quality of life and patient care for those dealing with breast and other cancers.”