Chemical engineer uses elaborate charts and storyboards to partner with historian to bring British history to life in series of mystery novels. 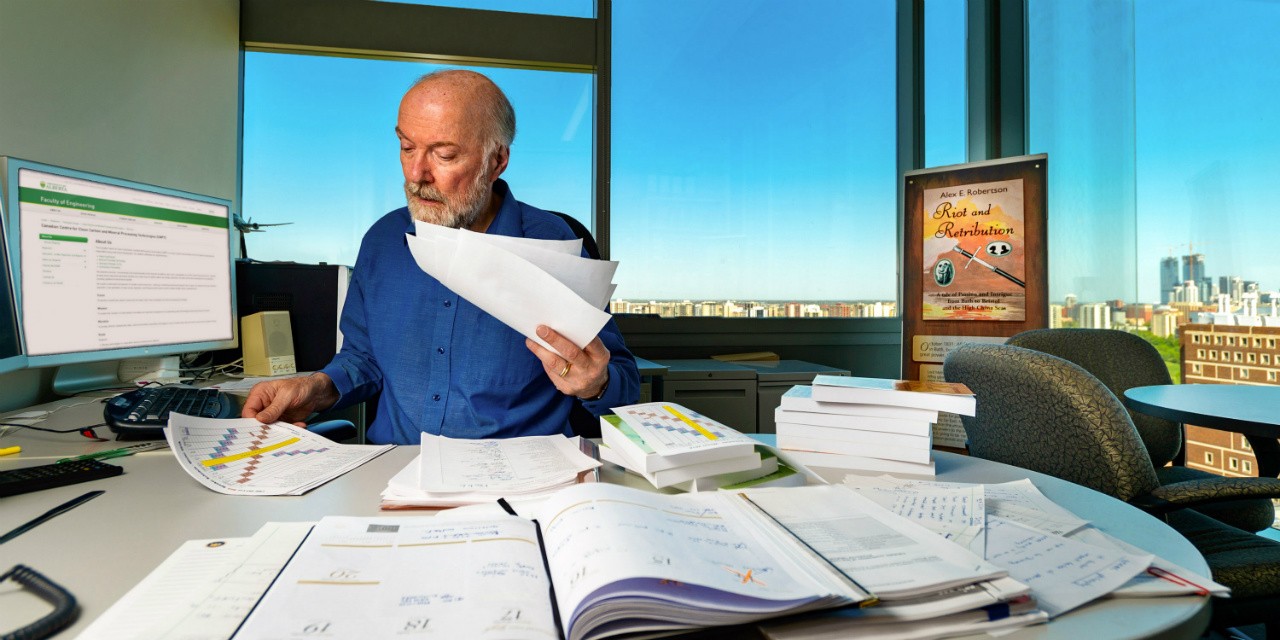 Robert Hayes draws on his engineering expertise to create fiction, crafting meticulously detailed storyboards and historical notes for the trilogy of mystery novels he is publishing with his historian co-author. (Photo: Richard Siemens)

Robert Hayes admits writing is not his forte.

The chemical engineer has written a number of textbooks—specializing in advanced computational modelling of catalytic conversion—yet regards creative writing as a whole other kettle of fish. An avid reader of historical fiction from an early age, he’s well aware of the difference between technical writing and literature.

"I don't write,” he said with disarming conviction. “I mean, I've written 120 scientific papers and five books, but that's science writing—it’s not the same thing.”

But Hayes refused to let a deficit of poetic flair stop him from creating a trilogy of historical novels set in early 19th-century Britain. He simply approached the project as any engineer would—meticulously charting narrative threads, settings, character bios and significant historical details on an elaborate storyboard. He then handed off the roadmap to his co-author, a historian with the requisite literary chops.

It all started more than 20 years ago when Hayes was collaborating with a researcher in Bath, England, to produce a textbook on catalytic combustion. The researcher’s wife, Alex Kolaczkowski, happened to be a historian.

"One evening after dinner and a nice bottle of wine, we started talking about history. I told Alex, 'You should write a historical mystery,’” said Hayes.

“The idea wasn't that I would write it. It was that she would write it so I could enjoy reading it. She said, ‘Well, you have to give me some ideas.’”

When Hayes sat down to brainstorm, he found the ideas came quickly. He soon realized he had enough for a trilogy—a murder yarn set amidst Britain’s political reformation of the 1930s and the country’s nefarious role in supplying the Chinese opium trade.

After four months of toiling away in the evenings, Hayes shipped the charts off to Kolaczkowski along with with a note: “Here it is—let’s go!”

"She said, 'This is really cool, but I have a day job and there's just no way.' So I put it on the shelf,” said Hayes. “Around 2006 I pulled it off and started researching again, then it went back on the shelf.”

Finally, in 2014, at an engineering conference in Banff, Hayes propositioned Kolaczkowski again: 'OK, you're retired now, so how about it?'” This time she acquiesced.

Since then—following a lot of back-and-forth drafts—two of the three novels in The Nathaniel Parry Trilogy have been released. Riot and Retribution arrived in 2015 and Napoleon's Gold: The Wages of Sin in 2017, all under the pseudonym Alex Robertson, a combination of their respective names. The release of the third, Deceitful Designs, is planned for the fall of 2019.

From the start, Hayes insisted on a strong female character at the centre of the narrative—think Emma Thompson as Beatrice in the film version of Shakespeare’s Much Ado about Nothing—a woman who is “somewhat unusual, politically motivated and fights for causes,” he said.

"A common complaint among my colleagues who have read the books is that there are too many characters, and it's hard to keep them straight," he said. It could be the engineer coming through in all that detail, but on the other hand a certain level of intricacy often comes with the historical fiction territory.

Despite the complexity, however, each book is designed to be self-contained, said Hayes, and can be appreciated without having read the previous title.

The trilogy is published by Hayes’ own company, Alpha Education Press, which he created with colleague Joe Mmbaga to produce textbooks in the 1990s. The first two novels have sold a total of 500 copies, he said—a respectable performance given the average for a self-published novel is about 200.

The books are available at Audrey’s Books in Edmonton, online at Amazon.ca and at the storefront retail outlet for Pagemaster Publications, the local company that printed the books.

Given that it took more than 20 years for the trilogy to come to fruition, is there another trilogy in the works?

"That’s anybody's guess,” said Hayes. “It's a lot of work … Alex takes everything mega-seriously and will not let one historically inaccurate detail pass, however small.”

But perhaps one trilogy was enough to prove to himself and everyone else that it’s possible to succeed at something that seems a far cry from one’s day job.

"How many chemical engineers do you know who write historical novels?"