Strategic sacrifice the key to victory in award-winning video game 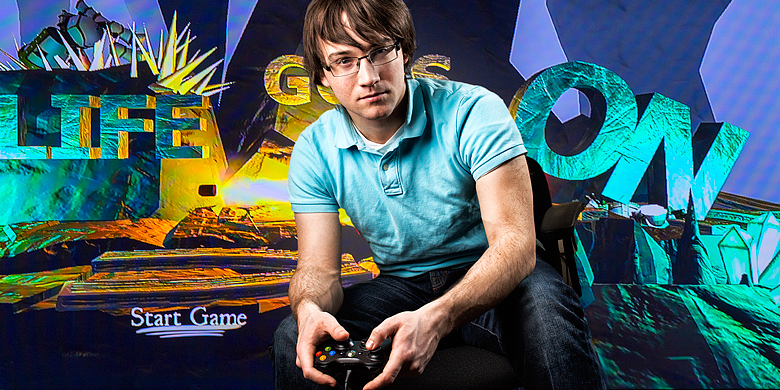 Off to a great start: "Life Goes On" co-developer David Holmes credits UAlberta's humanities computing program and the inspiring example of Edmonton-based BioWare for prompting him to consider gaming as a career. (Photo: Richard Siemens)

(Edmonton) In most action video games, the goal is to stay alive. But in Life Goes On there’s a twist—your avatar actually gets ahead by dying. Where and how it expires becomes a question of strategy.

And although this new game—developed by a graduate student in the U of A’s humanities computing program, a computing science grad student and two alumni from computing science and engineering—doesn’t launch until next spring, it has already proven hugely popular in its demo incarnation. It won an Intel Level Up Award last year for best character design, and generates some 50,000 hits on its parent company’s website every month. It was one of the top games at the 2013 PAX Prime exhibition in Seattle, and since last October the demo has racked up almost 16,000 downloads.

Life Goes On, which features knights on a quest for the Holy Grail, was born at the Global Game Jam at the U of A in 2012, part of an event where teams of game developers from around the world gather to produce a viable demo in 48 hours. That year’s theme for the contest was the Ouroboros—an ancient symbol of everlasting life embodied in the snake that devours its own tail.

"The idea we were going for was to make death matter in video games,” says team member David Holmes, “because until now death has been very static. We wanted to make a game where death was not only fun, but required in order to beat the game."

Every time the knight character dies in pursuit of a Holy Grail, a new knight is “re-spawned.” On the first level, for example, he might be skewered in a pit full of spikes, but another knight is immediately reborn and able to walk over his fallen brethren to traverse the pit. As the game advances through 50 levels, there is a plethora of ways to use death to the player’s advantage.

“You have to stand on the shoulders of your former comrades," says Holmes, adding that the aim is to solve the puzzle at each level as quickly as possible and with the fewest number of deaths.

Holmes has been in love with games since he was a child, he says, but it was the humanities computing program at the U of A—and the fact that Edmonton is home to BioWare, one of the world’s most successful gaming companies—that prompted him to consider gaming as a career.

“When I finished my bachelor’s in history and mathematics, the humanities computing program really stuck out for me; it was a pioneering program in terms of combining digital humanities and practical experience. The best way to get into the industry is to make games, which is what I get to do.”

When he started the program, Holmes thought he’d have to work for five or six years in the industry before striking out on his own as an independent game developer. But with the success of Life Goes On, Holmes and his teammates—U of A alumni Erik Johnson, Susan Wright and Ian Morrison—have started a company called Infinite Monkeys Entertainment with the help of the UAlberta Venture Mentoring Service, a free program run by the Alumni Association that lends assistance to anyone in the university community looking to start a business.

The game’s early success has also landed it on Steam, which is supported by more than 100 million users and considered the marquee platform for video game distribution. The company’s goal is to sell at least 5,000 units on the first day of sales, which would recoup their initial “bootstrapped” development investment of $30,000. But if early interest is any indication, downloads could easily surpass that, setting the team on its way to an exciting career after graduation.

"Game development is one of those things where you can wake up in the morning and think you're going to have a great day,” says Holmes. “But then there's a huge crisis by lunchtime—you don't even know if you're going to ship any more—and by the end of the day you’ve solved that problem and everything's looking good again. Then it all happens again the very next day."

To download the demo and get updates on Life Goes On, visit www.lifegoesongame.com

Watch the trailer for Life Goes On