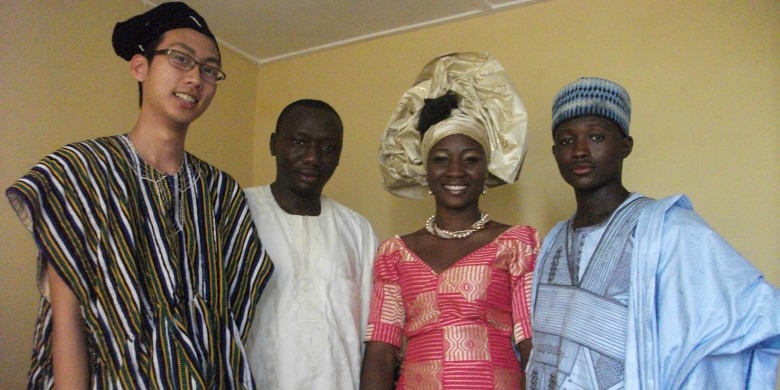 120907-ryanvoon-banner
Engineering student Ryan Voon (left) at the wedding of a co-worker at the tax office in Damongo, Ghana, where he helped improve collection methods. Voon says living with a local family helped him gain acceptance from people in the community.

(Edmonton) This is a story about a University of Alberta engineering student spending his summer in Ghana trying to change people’s lives.

You might expect that third-year electrical engineering student Ryan Voon did a lot of physical labour like digging water wells, but that’s not even close. Voon spent three and a half months in a district government tax office.

The U of A chapter of Engineers Without Borders sent Voon to the city of Damongo in western Ghana. He was part of the organization’s efforts to improve life in Ghana by upping the performance of the country’s local governments.

“They had no method of projecting incoming tax revenues,” said Voon. “Without knowing how much money is coming in, it’s hard to plan programs—but if they can collect taxes more efficiently and effectively, more good will come of it.”

Voon says he had an easier time being accepted by the community and his co-workers in the tax office because he lived with a local family, and soon came to understand how the people of Ghana interact with one another.

“In Canada our lives are linked to time. We have to be at work or at class at a certain time; there are deadlines all day long,” said Voon. “In Ghana I found myself adapting and making time to talk to people, even if it made me a little late arriving at work.”

Voon likened the role of the tax office in Damongo to a municipal government department in Canada, responsible for projecting the amount of tax money needed to build and maintain local schools, parks and roads.

Working with three tax-department officials in Damongo, Voon says he acted more as a catalyst for change than an as overseeing tax expert. “Everyone in the office knew the system could be better, and with me being there to help with that specific goal, everyone’s efforts were focused.”

Voon admits that overhauling a municipal tax collection system isn’t something he covered in electrical engineering, but he says stretching his skills was a great workout. “I grew as an engineer because it enhanced my leadership and project management skills.”