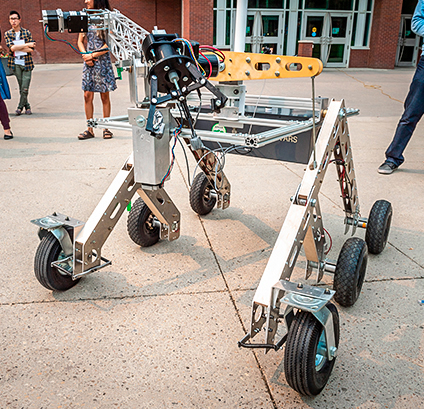 The suspension system and the chassis were designed so that all six wheels are in contact with the ground at all times, making it able to climb over rocky or uneven terrain. (Photo: Richard Siemens)

Space exploration vehicle will compete against 17 other rovers this weekend at an international student competition. 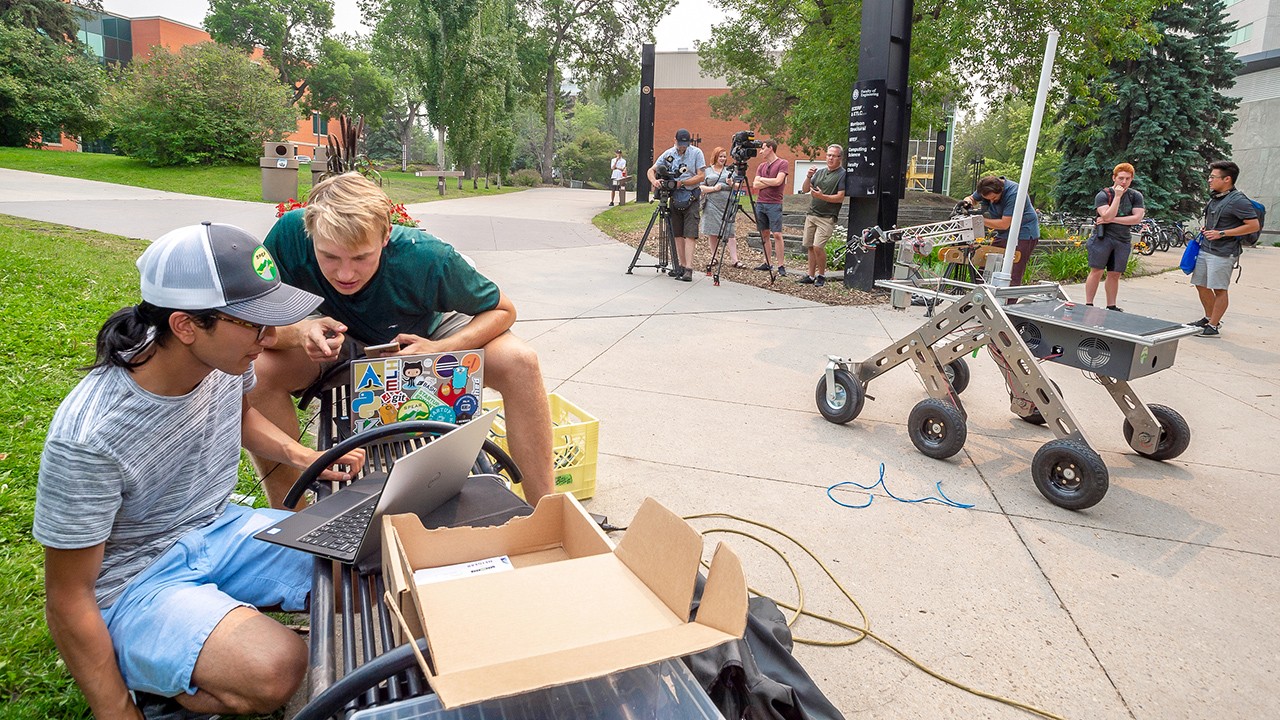 A group of U of A students demonstrate TARS, a rover they designed and built that will be competing at Canada’s premier international space robotics competition this weekend. (Photo: Richard Siemens)

A University of Alberta student-built rover designed to test soil for signs of life and autonomously search for stranded astronauts on a different planet,will be put to the test this weekend as it competes against other student-built rovers from around the world at Canada’s premier international space robotics competition.

Named TARS after the robot from the movie Interstellar, the rover—which will be competing at the Canadian International Rover Challenge in Drumheller—includes a human-like arm and six wheels capable of climbing over rocky or uneven terrain.

“We designed the suspension system and the chassis so that all six wheels are in contact with the ground at all times (making it able to) climb like a spider,” explained Manmeet Brar, a fifth-year mechanical engineering student who is project manager of Space Exploration Alberta Robots (SPEAR), the U of A group of students that designed and built the rover.

“The overarching mission of these rover competitions is to test for living organisms or signs of life on other planets,” she said.

In the competition, the rovers will be given GPS coordinates and must move to that location and collect and analyze soil samples, as well as take photos and videos.

“There is a big AI component since the rover needs to function autonomously, so during competition we really have no control over where the rover is or what it’s doing,” Brar said.

The rover must also be able to autonomously search for a stranded astronaut.

“This is one of the cooler tasks, and there's a bit of a story behind it,” she explained. “There's an astronaut that is lost or needs help and is injured, and so the rover has to be able to find them and then help them, like bandage them up for example.”

SPEAR launched in September 2016 and is made up of a multi-disciplinary team of students from mechanical, electronic and software engineering, as well as from the faculties of Business and Science.

“This is our first time entering this competition,” said Brar. “It's very competitive, and other teams and universities have been going for years. They just make minor adjustments or smaller design changes to their rovers, whereas we started from scratch.”

The team has made large strides since May 2017 when its 30 students began designing and building TARS. Brar said they are on their third design iteration after testing and manufacturing the rover.

“It looks quite different now than what we had first imagined,” she said.

SPEARS received funding from sponsors including the Faculty of Engineering and the Shell Canada Enhanced Learning Fund .

“Each competition, there is a budget of $20,000 U.S. max,” said Brar. “As the years progress and we get more funding and more sponsorship, we can upgrade some of the materials and parts and motors.”