Student connects to the North during summer placement 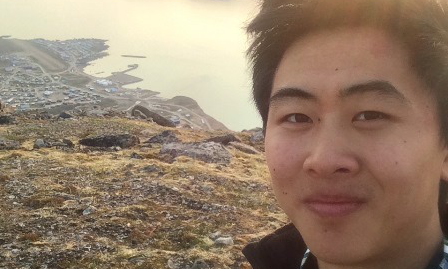 Engineering student Jason Wang spent his summer working in the Hamlet of Pangnirtung (visible in the background) as part of the Engage North program.

(Edmonton) Summer jobs come and go, but for Jason Wang, who is entering his second year of engineering studies at the University of Alberta, working for three months in a remote northern community was an experience he’ll never forget.

“I know I’ll go back up North one day. I don’t know what I’ll be doing, exactly, but I’ll definitely go back,” said Wang, who has just returned from a placement in Pangnirtung, Nunavut. While there, he worked for the hamlet as part of Engage North, an organization established at the U of A’s Faculty of Engineering last year to connect Canada’s universities with residents in northern and remote communities.

Wang’s original assignment was to establish a coding club for kids, to help empower youths and young adults in the community of 1,300 to create computer software and apps that address their own needs. Wang worked briefly with a local game designer who had been writing games and apps in the Inuktitut language. When that person moved away from the community, Wang’s responsibilities shifted to re-establishing wireless Internet access in the town’s community access point, and beginning work on a “healthy arcade” project that would let people get a physical workout while playing a virtual reality video game.

The idea is to put players on a multidirectional treadmill then have them complete tasks while wearing a 3-D virtual reality headset that puts them “inside” a video game.

“I built two computers that are able to run the system,” Wang said. “The headset is very demanding—it’s two screens that are very near high-definition quality, and I set up all the software. It’s really exciting because as consumers, we probably won’t have access to this kind of thing for another four or five years.

“We’ve been hoping that it would be the first public game of its kind in Canada,” said Wang, adding that hardware for the game—the treadmill and some computer hardware—is scheduled to arrive early in 2015. At that time, it should be a simple matter of plugging in the game.

Wang says it wasn’t working with computers that drew him to the position—he’s enrolled in the mechanical engineering program rather than computer engineering—but it was the chance to help others and work with people.

After becoming friends with two of last year’s Engage North fellows and learning about their experiences and about Engage North, Wang wanted to get involved. Wang wants to have an impact as an engineer, and he felt Engage North gave him the opportunity to get a head start.

“One of the things that I really liked about Engage North is that it was created to work with communities. That resonated with me.  I wanted to go out and have an impact—even a small impact.”

As a first-year engineering student last year, Wang became involved with student governance, leading the First-Year Club. “I found out that decisions I made had an impact on students, and that appealed to me,” he said.

Wang says he learned important skills that engineers require, not the least of which is how to understand the needs of communities.

“The first thing I learned this summer is that you have to understand a culture and a community before you start trying to do things,” he said. “The most memorable thing was seeing how driven they are—they pay very close attention to the struggles their culture faces, especially with language and traditional dances and things like that. Seeing how aware they are of their own issues and how some of them have an idea of what they want to do to change things was the most inspiring thing about the whole experience.”

Student connects to the North during summer placement
Newsroom