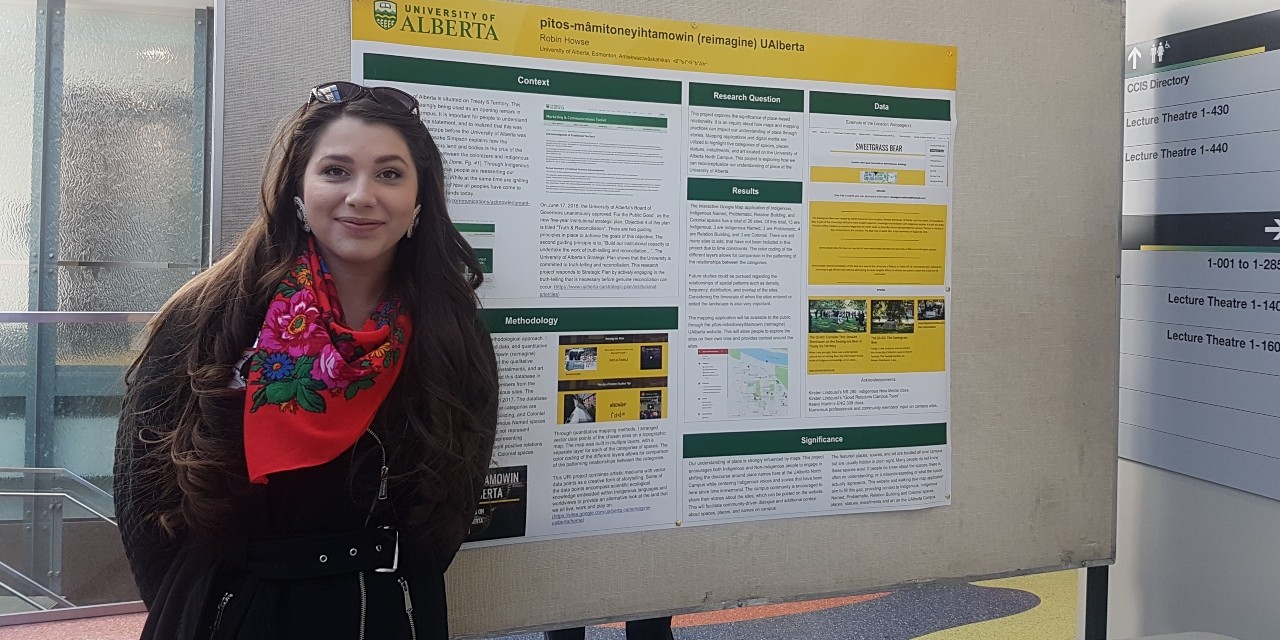 U of A student Robin Howse created a walking map and website that offer an Indigenous perspective on prominent sites on the university's north campus. (Photo: Jordan Mae Cook)

A walking map created by an undergraduate student in Native studies is providing an Indigenous lens to the buildings, art and spaces of the University of Alberta.

“The way you understand place and place names impacts how you see the world and how you interact with it politically, socially, economically and environmentally, and informs how you’re going to solve problems,” Howse said.

“Once people are able to understand the complex history of this space, they can better understand our contemporary issues and why things are the way they are. Understanding that this place was already named before the university came along and expressed dominion over it really changes your understanding of it,” she said.

Howse pointed to the statue in front of the South Academic Building as a good example of the change in understanding. The statue is of U of A founders Alexander Rutherford and Henry Marshall Tory looking at a map of the land, then a collection of river lots, the university would eventually be built on.

Highlighting and mapping the current sites on campus is about more than providing historical or contemporary information. Naming places is a political action, said Howse.

“Those who are in charge of naming places and creating maps usually control the discourse around our spaces,” she explained.

“The importance of mapping and looking at the original names of things is that it lets you realize these places are dynamic and changing, and lets you know there is a presence here that has been affected by systematic forces.”

Howse’s focus on the importance of names includes the name of her own project: pîtos-mâmitoneyihtamowin (reimagine) UAlberta. She came up with it working with Cree language instructor Dorothy Thunder.

Howse accentuated her own research for the website with crowdsourced information, some of which came from a third-year U of A English class.

“There are so many people doing this, a lot of this information is out there, so I wanted to create a hub for it,” explained Howse, who noted U of A Native studies researcher Nathalie Kermoal and education researcher Dwayne Donald have also each looked into the history of the place the U of A now occupies.

Howse’s project won the Community Connections Award at the Festival of Undergraduate Research in March 2019. The award recognizes outstanding research that bridges communities on or off campus.