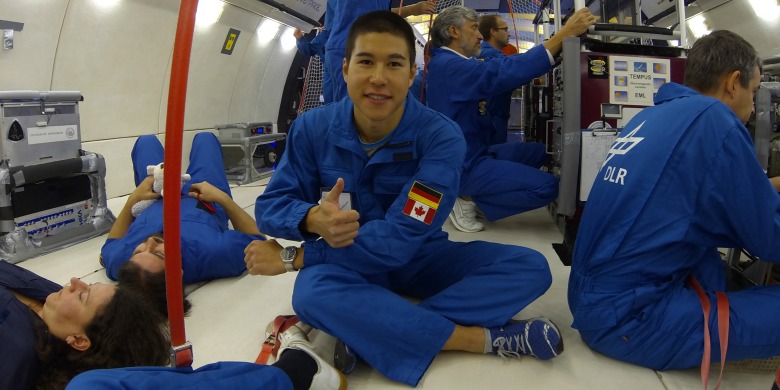 131204-brandon-kwong-banner
Brandon Kwong's engineering co-op placement in Germany included an opportunity to supervise a U of A experiment in simulated low gravity aboard an aircraft.

(Edmonton) A year ago, University of Alberta engineering student Brandon Kwong realized that doors don’t open for you unless you knock. Since then, Kwong’s door-knocking has led him to a paid co-op placement working on a top-secret space technology project in Germany, and a seat on a parabolic flight to monitor a Faculty of Engineering professor’s experiment in a low-gravity environment.

Kwong, a co-op student in his final year of the mechanical engineering (biomedical) program, always hoped to do one of his co-op placements abroad. Trying to gain international education experience first, he entered a U of A student competition to take part in the Canada-Norway Sounding Rocket (CaNoRock) program and wound up working with a group of students and rocket scientists at the Andoya Rocket Range in Norway.

That experience, he says, led directly to his most recent engineering co-op placement, with Astrium GmbH, part of a larger company comprising Airbus, Eurocopter, Astrium and Cassidian.

“After CaNoRock I got more serious about working abroad, and confident that I could,” he said. “Then I discovered the coolest job placement ever, at Astrium in Germany, and the CaNoRock experience made me more qualified for the position.”

Kwong is working in Friedrichshafen, Germany, in the company’s space transportation department. He’s part of a team working on an electromagnetic levitator that will be flown to the International Space Station next year.

Other than that, there isn’t much Kwong is permitted to say about the work he has been doing during his eight-month placement, which he describes as “top secret.”

But his time in Europe included an interesting twist. Materials engineering professor Hani Henein, who helped arrange Kwong’s co-op placement at Astrium, asked Kwong to travel to France to supervise an experiment designed by one of his post-doctoral students. The experiment was conducted on a jet during a parabolic flight, which simulates microgravity environments by flying in a series of up-and-down trajectories.

“Dr. Henein’s research group runs experiments in these parabolic flight campaigns using electromagnetic levitation to study material properties, just like what I do at Astrium. He sent me as a primary investigator, to oversee the experiments his post-doc had prepared at the German space agency in Cologne,” said Kwong. “He said it would benefit him in the sense that he’s training up the next generation of space researchers, and that it will be good for Canada and his research group for me to be on that flight. I think he was being very generous.”

“It’s an important part of my job, the mentoring and seeing students grow,” said Henein, who has already helped arrange for a second engineering student to take on a placement at Astrium early in the new year.

The parabolic flight Kwong was on included 31 periods of weightlessness lasting about 20 seconds each.

“It all happens incredibly fast. You’re only allowed to free-float in a designated area, and only three people are allowed in at a time. Everywhere else important research is being done.”

Kwong says the past couple of years have been transformative.

“At one point I thought that building a rocket in Norway would be the coolest thing I would ever do, but that led me to working for a space company in Germany, even cooler, and then to a parabolic flight! Every little thing I do can help progress my career and move me towards bigger and better things. Something far off in the future that may seem impossible now can happen if you just start taking steps in the right direction and grabbing every chance you can,” he said.

“I won’t shy away from a great opportunity again; I might even have some confidence that I’ll be able to do it. And I never ever could have planned out this career path, so I know I can’t plan the rest. I’ve always thought that I would need to have my career plan all figured out by around this point in my life. Well I don’t, and I don’t really want to. I know that as long as I set myself up with a good chance to succeed, and keep an open mind, I’ll be happy to just see where that takes me.”