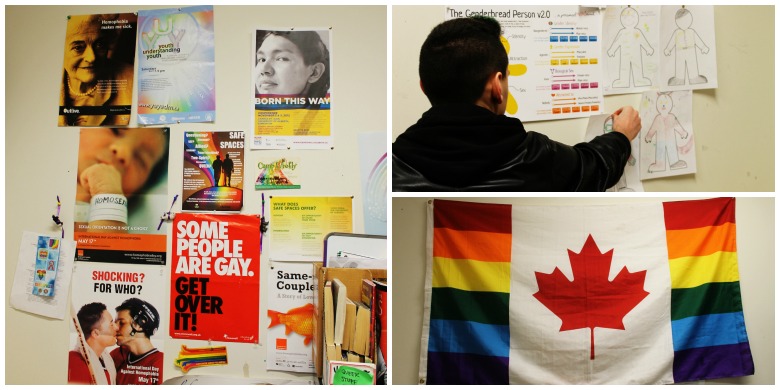 130314-outreach-banner
The OUTreach office is wallpapered with posters promoting understanding and inclusion of gender and sexual minorities. The LGBTQ student group hopes to bring similar messages to the whole university community during the first-ever campus Pride Week.

(Edmonton) A space heater hums away in the corner of an office barely big enough to fit four people, stirring up a walled mosaic of GenderBread Person posters and a rainbow-embellished Canada flag. These vibrant, cozy quarters in the lower level of the University of Alberta’s Students’ Union Building house OUTreach, the largest LGBTQ student group on campus and one of the imaginative forces behind the University of Alberta’s first-ever official Pride Week.

For group members Kalyna, Eric and Laura, the institution-wide event is an example of how great things can stem from humble beginnings.

“My story isn’t super-exciting,” Eric says with a laugh when talking about how he joined the group. “I went, I found really good friends, and I just ended up staying,”

Kalyna and Laura say they came to OUTreach in the same ordinary way—they looked up the group online and went to the weekly meeting in Athabasca Hall. But they all stayed for the same reason: the community.

There is no space heater whirring in the corner of the meeting room, but Athabasca Hall manifests a different kind of warmth. The dark, woody room is lit up by carbonated laughter among a circle of friends, framed by subdued yet engaged conversations around the outside of the room. Instead of separating the group members by their differences in age, study area and background, the atmosphere in Athabasca Hall incubates seeds of similarity.

Kalyna explains that the OUTreach community acts as a haven from the struggles of hanging out with other groups.

“If you’re hanging out with your straight crowd of friends, you don’t relate to their experiences sometimes and you kind of feel like an outsider. And that makes you wonder, ‘What’s wrong with me?’” Laura said.

Providing a safe space for LGBTQ students has always been a goal of the group, but their plans of action have shifted over time. From their roots as a more political group in the ‘90s, they have grown to become a social club on and off campus. With more than 50 members from the university and the greater Edmonton community, the group is now equipped with a greater volunteer force and has established institutional networks—the building blocks of an event as big as Pride Week.

Although the group has had similar events in previous years, none matches the scale and quality of this year’s Pride Week. With the support of the university and community organizations, the institution-wide celebration will be in a league of its own, making OUTreach one of the first student groups in Canada to run such an event.

“To have the university back this as an institutionally supported and sponsored event is a huge deal, because it’s saying everyone from the ground up—essentially everyone from OUTreach to the president of the university—is a part of this and we’re all pushing this forward,” Kalyna said.

At this year’s Pride Week, “pushing forward” takes the shape of a week full of entertainment and education, with events including a pride parade, a drag show and a production of the Coming Out Monologues. The events are as diverse as the participants, but all aim to raise awareness of the challenges still faced by LGBTQ people on campus and beyond, and to foster a culture of understanding.

“It would be nice to get people to stop and think and understand that it is not just a theoretical question, not just an abstract concept of, ‘Oh, someone might get harassed in the bathroom.’ These are actual people struggling on campus,” Laura said.

Pride Week takes place March 13 to 22. For more information about the events taking place and how to get involved, check out the Pride Week website.

YouAlberta is the official blog about student life at the U of A. Its contributors are members of the Student Communicators Team, and as current students, they know what it's like to balance study, work and play at the U of A.