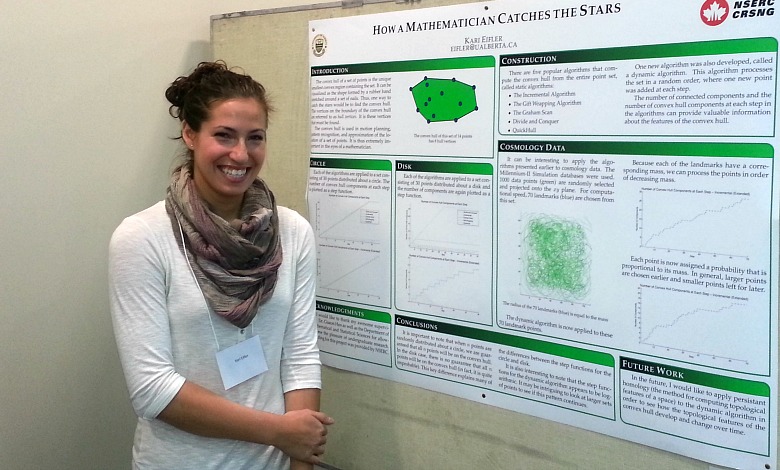 131126-urs-kari-eifler-banner
Math student Kari Eifler with her poster presentation at the Undergraduate Research Symposium Nov. 22. Eifler says she wanted to show other students they don't have to wait until their PhD to do math research.

(Edmonton) Where can you go to learn about public attitudes on smoke-free playgrounds, cooking activities in the ancient Greek city of Kastro Kallithea, regulation of hate speech in Alberta and intelligent control of prosthetic limbs—all in one place?

Last Friday, that place was the University of Alberta’s third annual Undergraduate Research Symposium, where 130 undergraduate presenters from nearly every faculty on campus put their burning interests and passions to public scrutiny.

The stars were out for math student Kari Eifler, whose summer job was developing an algorithm and poring over cosmology data from the physics department. She says her love of math and her desire to devote her life to that field was a motivating factor for getting involved in research, but the presentation was also meant to help motivate others.

Among the presenters were the Map Men, an interdisciplinary team from the U of A whose presentation was named best in North America at the 2013 International Genetically Engineered Machine competition. Led by biochemistry professor Mike Ellison and chemical and materials engineering professor Dominic Sauvageau, the team created a biological computer, using bacterial cultures to solve the Travelling Salesman Problem, a classic conundrum in finding the shortest possible route through a network of cities.

Engineering undergrad Albert Hong presented about his research into solving a puzzle of a different nature—developing a bandage that can stretch over human joints and stay fastened. Hong, whose interest in research and discovery led him to apply to one of his professors for guidance, offers simple advice for other would-be inventors. “Try and find an issue that really, really speaks to you and try and formulate a plan on how you can fix it,” he said, adding that finding the right match for a co-operating professor is equally important.

This year’s symposium is not only for the students, says Connie Varnhagen, academic director of the U of A’s Undergraduate Research Initiative. Varnhagen cites feedback from one of the judges, who was so impressed by a student researcher’s poster presentation that the judge offered to connect the student with another group she may be interested in working with. “It’s the community of research and advancement of knowledge,” said Varnhagen.

Varnhagen notes that the competition to be part of the symposium is increasing with more applications coming in every year. She said the connections that student presenters are making with researchers and fellow students are driving the success of the event—and the futures of the participants.