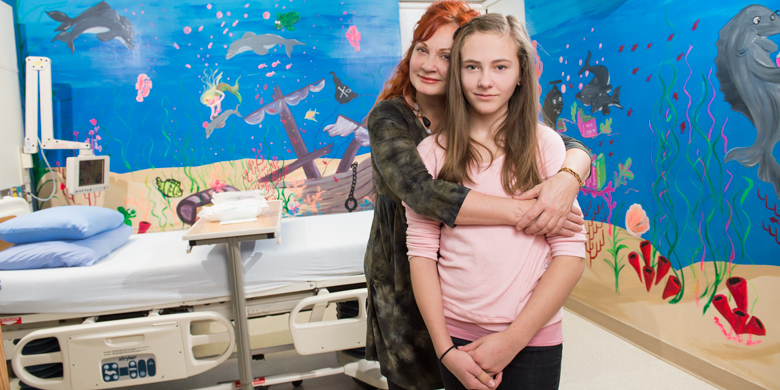 131217-stollery-mural-banner
Izabella Orzelski-Konikowski and her daughter Kasia in the undersea-themed room at the Stollery Children's Hospital. Orzelski-Konikowski engaged her U of A art students to paint six murals as a thank you to the hospital for Kasia's life-saving care. (Photo: Richard Siemens)

(Edmonton) Through a cloud of tears, Izabella Orzelski-Konikowski felt paralyzed about having to face her daughter and find the words—any words—that could lessen the blow of learning the teen’s entire left lung had to be removed.

Earlier that morning, Orzelski-Konikowski’s husband had taken Kasia, 13 years old at the time, to see their family physician after she complained of having difficulty breathing and vomiting blood. By that afternoon, doctors had found a rare tumour covering nearly all of Kasia’s left lung and she was admitted to the Stollery Children’s Hospital in Edmonton.

“I was crying. I was afraid to drive there; I was afraid about how to confront Kasia, how to talk to her, how to keep calm,” recalls Orzelski-Konikowski of that dark January day one year ago.

Throughout Kasia’s treatment and hospital stay, Orzelski-Konikowski says she was able to find a sense of calm thanks to the professional and caring staff at the Stollery, who empower parents by communicating with them every step of the way.

“All the nurses, the doctors, the staff members, they took such great care of her. They made sure she was as comfortable as possible,” says Orzelski-Konikowski, an artist-educator at the University of Alberta. “They did everything they could to make her feel good.”

Giving thanks one brush stroke at a time

Several times during Kasia’s hospital stay, Orzelski-Konikowski received well-wishes and visits from her U of A students taking painting courses through the Faculty of Extension. Each time she remarked how she had to find a way to say thank you to the Stollery.

She got that chance this past fall when the Stollery contacted her about creating a series of murals in a recently renovated pediatric outpatient unit. Within the span of five to six weeks in November and December, students from her painting level three class at the U of A created six murals with themes based on the seasons, video game adventures and an undersea kingdom.

“I do believe the best way to say thank you is through what you do best and I am an artist-educator,” Orzelski-Konikowski says. “So being approached by the Stollery with this opportunity to create paintings in one of their units, that was like an offer that came from heaven. All of the students got excited about working there—they couldn’t wait.”

Each room was painted either by an individual student or by small groups of students with different styles and levels of experience. The optional project was not only an opportunity to grow as an artist, it was also a rare opportunity to help children who’ve had a rough time find a sense of adventure, says visual arts certificate student Yvonne MacGregor, who painted a video game-themed room.

“I liked what it was doing, that we could give them the option of expanding their imagination, letting them forget they’re in some place sick for a bit and be able to let them be kids and play for a while,” says MacGregor, a programmer by trade.

The completed murals have added a splash of colour to what were the white walls of a former adult-care unit, says Myrna Landers, the unit manager. It adds the right pediatric tone that fits with the rest of the Stollery, setting children and parents at ease.

“I love it. It is so bright and colourful now—the kids even request certain rooms, choosing their favourites,” says Landers. “The reaction from everybody is ‘Wow!’”

If anyone understands what a difference a comforting room can mean during a frightening stay in hospital, it’s Kasia. During her recovery on an inpatient floor, her room featured smaller tile murals—a special touch she says made it feel like people actually cared about making kids feel better inside and out.

“Whenever kids are lonely or they can’t sleep, they can always look at the walls and be happy,” says Kasia, now 14 years old and back to enjoying her favourite activities such as ballet, art and horseback riding. It’s a special gift that wouldn’t have been possible without the Stollery—and a gift she’s happy her mother and the U of A students were able to return in kind.

“I’m really grateful for what everyone at the Stollery did for me, especially the doctors who did the surgery and removed the lung, and the nurses. I’m just so thankful to everyone right now.”