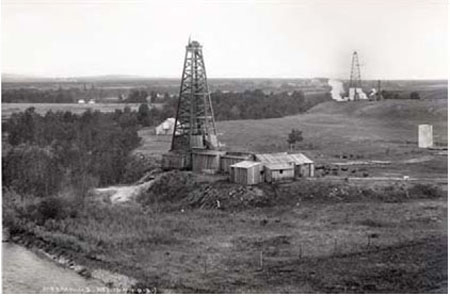 (Edmonton) Once the industrial heartbeat of the community, the Turner Valley Gas Plant now sits idle, waiting for a new use. When John Barlow, editor of the Okotoks Western Wheel, heard about the plan that University of Alberta students had to repurpose the abandoned plant in the southern Alberta town, he knew he had to write about it.

“We ran a story because the students proposed an extremely unique idea on how to utilize the plant, and provided some viable alternatives to resuscitate it. It also sparked a debate in our readership area and across Alberta regarding the future of the gas plant. Residents in the area are once again talking about doing something with it.”

The newspaper story, which outlined details of a plan to turn the former gas plant into a greenhouse for Alberta prairie grasses, won the 2011 University of Alberta Writing Award. The innovative plan was developed as a class project by undergraduate students, under the guidance of Anne Naeth, professor of renewable resources at the U of A.

Though hypothetical in nature, the plan was extensively researched and is feasible in the community’s eyes, Barlow said.

“Now there is a real push in the community to have the gas plant developed as an interpretive centre using some of the proposals included in the study done by the U of A.”

The writing award, which included second and third-place winners, was given out May 7 at the 91st annual spring convention of the Alberta Weekly Newspapers Association.

Established in 2006 by the U of A’s University Relations office, the award recognizes outstanding coverage by Alberta’s community newspapers of U of A students, research projects or coverage of provincial post-secondary education issues in general. It was created as part of the university’s ongoing commitment to rural Alberta and its communities.

“The U of A is the province’s flagship university, and as such we seek to have a positive impact on all the communities we serve,” said Deborah Pozega Osburn, vice-president of University Relations. “That impact can come through research discoveries, through the good work that our alumni are doing in their home communities, through our ability to provide a world-class education to Albertans—in more ways, really, than we can imagine.

“This year’s award-winning story is particularly important because it brings to light ways that University of Alberta students can contribute to the well-being of our communities,” Pozega Osburn added. “We commend the Okotoks Western Wheel for the work that it does to keep its readers informed of issues that affect their daily lives, and thank the editorial team for its coverage of our students and their contributions.”

Judges named Barlow’s story the winner for its depth in showing how undergraduate research has real-life applications. Barlow was pleased to accept the award on behalf of the Okotoks Western Wheel, a weekly newspaper with a circulation of 16,187 readers.

“This award showcases the opportunities available for community newspapers and post-secondary campuses across Alberta to develop beneficial, working partnerships. This story was an excellent example of a win-win situation where the research done by the students and faculty can be extremely valuable, and community newspapers can build that research into strong stories.”

The second-place winner was a story published in the Westlock News, highlighting a U of A study being conducted in a local school by education professor Marie-Claire Shanahan. The story described how Shanahan was working to bring complex scientific information to a level that would engage elementary school students. Judges liked the story for its clear message showing how U of A research can have an impact on learning at an early stage.

Third place went to the St. Albert Saint City News, for a story written about a philosopher-in-residence program at a local elementary school led by U of A scholars John Simpson and Rob Wilson. The spirit of the story was deemed by judges to reflect the U of A’s promise of “uplifting the people” by being involved in the community.