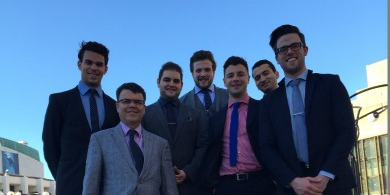 (Edmonton) It isn’t every day that extracurricular projects take on the dramatic tension of an episode of Dragons’ Den, but that’s what a group of University of Alberta students experienced as finalists in an international competition.

Faculty of Engineering students Ben Lakey and Thomas Dennehy, and Alberta School of Business students Steven Biggs and Brandon Foster, made it to the final three in the annual Engineering and Commerce Case Competition. After winning in divisional case competitions during the four-day event, the U of A team was guaranteed a spot in the final three.

The competition presents teams of business and engineering students with real-world business challenges. Teams are given a fixed amount of time to develop technical and business solutions, and present their ideas.

On the final day, the teams were presented with a tricky challenge in which a construction firm was seeking ways to improve its bidding practices. Quebec has been embroiled in controversy over allegations of bribery and corruption in the construction industry, and the company wanted a bidding process that would help prevent unethical conduct from taking root in its operations.

The U of A team developed two solutions: one was a process called Last Planner, which leaves a paper trail on all aspects of the bidding process, assigning accountability to individuals along the way. Another proposed solution was an automated system companies could use to analyze their own capacity to even prepare a bid on a job. The software would consider all manner of variables, from materials and labour costs to market and seasonal conditions, and even in-house expertise.

“The idea was to eliminate bidding on unsafe projects or projects that were unsuitable for the company,” said Lakey, who is in the final year of the mechanical engineering co-op program.

At the end of their final presentation, the team faced aggressive questioning from a six-member panel of judges, which included a vice-president of Siemens Canada.

“It was intimidating,” said Biggs. “They laid into us with some tough questions.”

To be fair, teams only had 10 hours to prepare their solutions and teams struggled with the fact that important information wasn’t included in the challenge as presented to them.

The U of A team, which worked under the supervision of Bill Pick, a former Dow Chemical executive who now holds the William Magee Chair in Process Design in the Department of Chemical and Materials Engineering, finished in third place out of 11 teams. The students are pleased with their performance and say they gained valuable experience.

“Being part of this team and going through this competition changed the way I approach problem solving,” added Biggs. “We learned from [Pick] that there’s more than one solution to a problem and more than one way to arrive at a solution, so we really had to cover a lot of bases before presenting solutions to the people whose problems we were actually trying to solve.”

Biggs and Lakey agree that teamwork was a vital part of the group’s success. Because all four members have known one another for years, and because they’d practised solving cases with coaching from Pick and Brad Leonard (chemical engineering ’14), a member of last year’s winning team, they had an advantage over other teams.

Hosted by Concordia University in Montreal, the competition included a mix of students from universities around the world, including teams from Mexico, Israel and Egypt—and the teams were all encouraged to network with one another.

“I know it might sound cheesy to say, but we all made friends there,” said Biggs. “It was a great experience for all of us.”