“I feel a great responsibility to show there is another way for women to live,” says U of A master’s grad Esra Kazanbas. 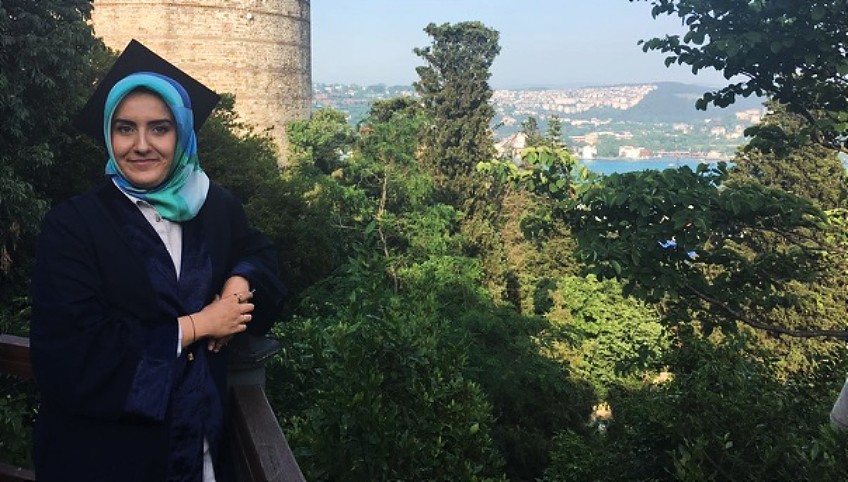 Esra Kazanbas was the first person in her family to go to university. Now, with a master's degree in women's and gender studies from the U of A, she plans to eventually return to her native Turkey to teach university courses. (Photo: Supplied)

For Esra Kazanbas, it was personal. Very personal.

The 32-year-old from Istanbul is graduating from the University of Alberta today with a master’s degree in women’s and gender studies after drawing on her own experiences in her thesis to analyze gender politics in contemporary Turkey.

“I feel a great responsibility to show there is another way for women to live,” said Kazanbas, the first person in her family—male or female—to go to university.

Her research focused on the impact of Turkish government policies, statements and social attitudes towards women—written and unwritten rules she has had to overcome her whole life to pursue her studies.

“It’s not easy to be the different one and the first one to get educated in the family,” Kazanbas said. “The countless obstacles I have faced motivated me to keep moving forward without expecting to be understood, but I always had hope.”

“And persistence—that is what differentiates hopes from dreams,” she said.

“Esra’s story is remarkable,” said Michelle Meagher, chair of the U of A’s Department of Women’s and Gender Studies. “At the U of A she wrote a thesis, worked as a teaching and research assistant, participated in student activities and is now on her way to fulfilling her dream of earning a PhD—all this in the face of disapproval and financial insecurity.”

Kazanbas faced financial, traditional and psychological barriers to get her education.

Growing up as the third of four children in a traditional Muslim family, she was the only one with a drive to complete school.

After completing Grade 8, Kazanbas could not attend a regular high school due to Turkey’s ban on headscarves in public. However, at 17, she became the first woman in her family to get a job outside the home, working at a nearby supermarket. To her parents’ surprise, she spent her paycheques on distance learning courses, studying math, physics and English, all without the guidance of a teacher.

“I did it despite the fact that women’s education was considered a waste of money,” Kazanbas said.

“Thinking back, that was the most difficult time—trying to learn high-school courses by myself as well as being an older student and providing the financial means for my education myself,” she recalled.

Kazanbas eventually challenged the national university exam and won a spot in a free public university at age 25. The ban on headscarves was lifted, so her family allowed her to continue her studies.

After two years, she again shocked her family by becoming one of only four students allowed that year to transfer to the best university in the country, Bogazici University.

“Becoming a student at Bogazici University was a milestone because I had access to high-quality education which equipped me with the tools of critical thinking,” she said. “Also, my professors widened my horizons, which led to a metamorphosis in my life.”

Earning a scholarship, she completed her undergraduate degree in English literature. She also volunteered at the women’s library in Istanbul and helped professor Isil Bas, a mentor, to organize a symposium on violence against women.

A lifelong dream to study

She continued with that focus when she decided to fulfil her lifelong dream to study abroad. Though she was offered a full scholarship to study history at an American university, Kazanbas chose to come to the U of A based on the strength of the women’s studies courses it offered.

Teaching and research assistant positions, scholarships and bursaries made it possible to study without financial support from her family.

During her time at the U of A, Kazanbas’ accomplishments were recognized by the Canadian Federation of University Women in Edmonton, who awarded her the Margaret Brine Graduate Bursary for 2018. Being recognized in this way “boosted my self-esteem,” Kazanbas said.

She was also the recipient of the Khalida Quraishi Memorial Graduate Award in Islamic Studies in 2018-19, nominated by political science professor Mojtaba Mahdavi.

“Esra wrote an excellent master’s thesis exploring reproductive economies and body politics in contemporary Turkey from a feminist perspective and drawing on her own lived experiences,” said Chloë Taylor, Kazanbas’ academic supervisor. “She overcame numerous obstacles in order to pursue her studies, both in Turkey and in coming to Canada—obstacles that would have worn a less strong person down.”

“She is a generous soul, determined and passionate about her work and her career, and committed to justice both in her personal life and at a societal level,” Taylor said.

In September, Kazanbas began a four-year PhD program at the University of Toronto, where she will focus on the increase of sexual assault and violence against women in Turkey.

She plans to eventually return to Turkey to teach university courses, knowing that the topics she studies are not always welcome in Turkish academia.

Kazanbas is grateful to the U of A faculty for seeing her potential and providing financial support for her studies.

“I owe much of my success to my exceptional supervisor, professor Chloë Taylor, who reflects intellectual virtue in every action and has been a great supporter of me and my studies,” she said.

“When they are accepting students and considering financial support, it may seem like just numbers, but those numbers can change someone’s life,” Kazanbas said. “That’s what they did for me. It’s the only reason that I could come here.”

She said she’s sharing her story not to evoke pity, but to remind people to stand in solidarity.

“My journey is one woman’s struggle, but it is also the struggle of many women, not only in my home country, but around the world. I hope to be an example for them.”