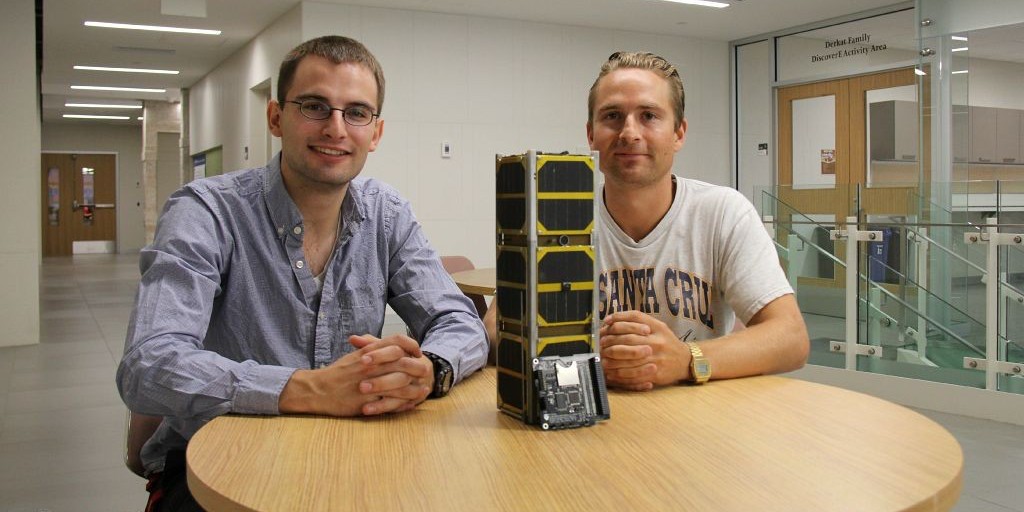 AlbertaSat team members Charles Nokes (left) and Tayler Robertson, with a model of their team’s cube satellite, are preparing to participate in an international cube satellite conference.

(Edmonton) A team of University of Alberta students who are designing and building the first made-in-Alberta satellite are preparing to meet their colleagues in a global partnership to launch 50 cube satellites next year.

Members of the AlbertaSat student project team are jetting to an international conference in Liège, Belgium, this week. They’ll be blogging about their activities during the conference.

In Liège, the team will meet with QB50 organizers and get details about next year’s planned launch, exchange ideas with other QB50 participants, and get state-of-the-art information about space exploration and satellite technology from researchers and industry reps.

Meeting with the different university teams building satellites will be educational, says team member Tayler Robertson, a U of A physics graduate who is working on his master’s degree in electrical engineering. “We all face similar challenges in designing and building our satellites, but each university group will approach it from a different angle,” he said.

“It’s going to be interesting to find out how other teams have overcome the same challenges in different ways.”

The U of A team will deliver four podium presentations at the conference, including one on the team’s thermal modelling simulator and the development of an algorithm that keeps battery charges stable over time, as opposed to having batteries run down and shut off while they recharge. In one of the team’s three poster presentations, Robertson will explain the testing and verification processes for Ex-Alta 1’s  attitude determination and control—a vital aspect of the design.

“One of the things we’re going to get from this is a re-energized team,” says team leader Charles Nokes, who is in his final year of engineering physics. “It’ll be good to have face-to-face meetings with the QB50 organizers, and once we get some firm dates from them, it will allow us to make solid plans for the next 12 months.”