Student's curiosity mushrooms into a calling 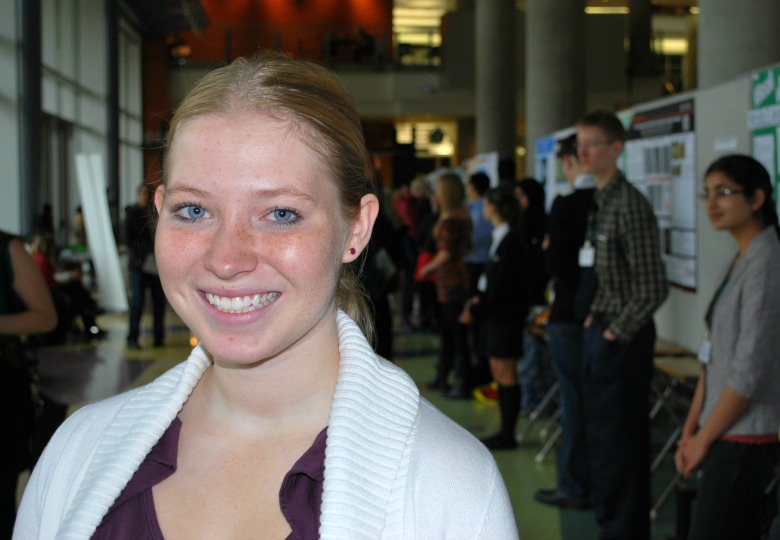 130617-kelcie-miller-anderson-banner
Kelcie Miller-Anderson has earned a collection of awards for her budding oilsands research, including the Alberta Emerald Award this month.

(Edmonton) As a native Albertan and lifelong Calgary resident, Kelcie Miller-Anderson has grown up in the heart of the province’s oilsands industry, keenly aware of the environmental controversy swirling around it.

The problem was in the back of her mind a few years ago, as she studied a dandelion growing out of the pavement. “They grow everywhere, and I wondered why they could do that.”

Miller-Anderson’s curiosity soon sprouted a makeshift lab in the basement of her family home, where the teen—then 15—began experimenting with fungus found in dandelion roots that keeps the weed hardy.

Intrigued by the plant’s scrappy ability to survive in tough conditions, Miller-Anderson hoped to adapt that idea to clean up the tailing ponds that store contaminants from oilsands extraction. Her experimentation evolved into growing oyster mushrooms in tailings pond material supplied by Syncrude. The results have been encouraging: the fungi are successfully treating the contaminants, dropping the levels of salt, pH, acids and hydrocarbons in the water. Even better, the method is all-natural and cost-effective.

Fast-forward three years and Miller-Anderson, now 18 and a second-year environmental sciences student at the University of Alberta, has collected a shelf full of prestigious awards for her budding research, including two this month.

She collected a national Top 20 Under 20 Award in Toronto June 6, then flew home to Alberta the same day to collect an Alberta Emerald Award for her work. And in 2012, she received a Manning Young Canadian Award and recognition as the ASTech Foundation Featured Student for that year.

Heady stuff for the barely legal teen, who is grateful that she has found her calling in life at such an early age.

“A lot of kids don’t have that passion coming into university. I have been lucky to find what I love before I started taking classes.”

As a kid, she dabbled with the standard baking soda and vinegar experiments, and has always been fascinated by the potential of science.

“Science gives a platform to answer questions. No one is saying no in science; there are so many things to be discovered and the possibilities are endless.”

Busy pursuing a land reclamation degree in the Faculty of Agricultural, Life and Environmental Sciences, Miller-Anderson is determined to eventually make a difference through a career in the oilsands.

“I was always aware of the industry and as I got older I realized how important it is socially and economically to Alberta and to Canada as a whole. All we hear in the media is the problems, not the benefits. I want to change the way the industry is perceived.”

Though she has suspended her research to juggle a class load, Miller-Anderson plans to get back to it before she graduates. The next phase will be field trials, likely conducted during her summers. “I want to solidify my findings and get the method perfected, and see it being used in the future.”

First though, come her U of A studies.

“I really loved my first year and I can’t wait to go back in the fall. The University of Alberta is one of those schools that is so good academically, but there’s also such a good community of students here.”