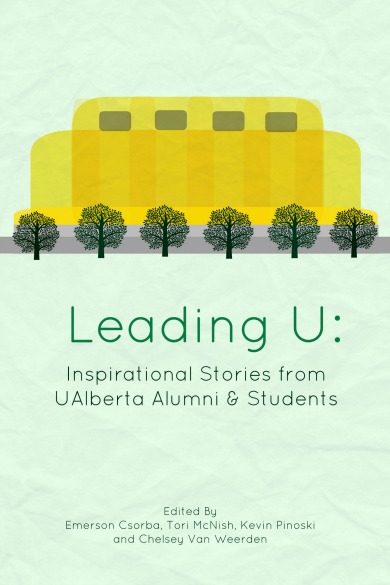 Since coming to the University of Alberta in 2009, political science student Emerson Csorba served on the Students’ Union Council, co-ordinated the “Stand Up for Edmonton: The University of Alberta’s Place in Edmonton” event, was named a 3M National Student Fellow, spoke at the United Nations as part of the International Youth Leadership Assembly and co-founded The Wanderer Online, one of Edmonton’s most-read daily online magazines.

As if that weren’t enough, he can now add book editor to his list of achievements. Csorba led and co-edited Leading U, an e-book in which 36 leaders with U of A connections share their on-campus experiences and reflections.

Although the book reflects a broad snapshot of stories across all faculties, it has a strong foundation in the Faculty of Arts: Csorba’s co-editors—Tori McNish, Kevin Pinkoski and Chelsey Van Weerden—are arts alumni, and contributors include other prominent arts alumni such as Brad Ferguson, Amy Shostak and Paula Simons.

“Several years ago, I participated in orientation as a senior volunteer, and remembered thinking to myself that the university needs a way to extend orientation past the first week of classes,” says Csorba. “Leading U is meant to serve as this resource, hopefully providing incoming students with something they can use to become engaged in university life from the first moment they set foot on campus.”

To find contributors, Csorba relied on personal connections he made during his time on campus. Hallie Brodie (who runs the YouAlberta student life blog for the U of A) provided the cover design, and Csorba credits Sean Price and the Alumni Association for being extremely helpful in answering all of his questions.

Despite the varied experiences captured in the book, there’s a common thread that runs through the stories: U of A students transform as people during their university experience.

“This sounds obvious, but I think it’s worth saying, because our society now questions the value of a university degree and focuses quite heavily on the acquisition of job skills. Developing particular kinds of knowledge and skills is important, but there’s a human dimension to university life that I view as exponentially more important,” says Csorba.

“In every essay, the contributor remarks that the University of Alberta provided experiences not previously imagined, whether it’s travelling to Japan, meeting one’s lifelong partner, founding a business or discovering oneself through readings of Aristotle’s Nicomachean Ethics. These experiences fundamentally shape a person, and they pave the road to a fulfilling life.”

Csorba, who is pursuing double honours in political science and sciences politiques, says producing the book helped him reflect on his own experiences over the past four years.

“My guess is that people’s interpretations of the stories will vary based on their program and year of study. But that’s part of the beauty in this book: it’s something that can be re-read at the beginning of each new year,” he suggests.

Csorba hopes to expand the book to include more stories from new and older alumni. “Because of the quality of people at the University of Alberta, we can surprise ourselves with the things that can be accomplished in relatively short periods of time.”