Students get a taste of rocket science 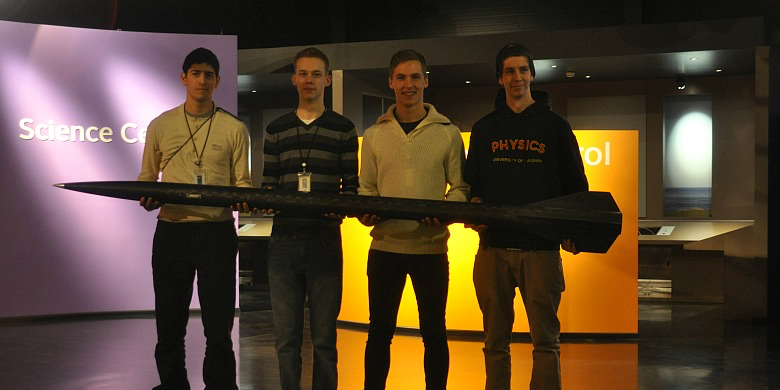 (Edmonton) Three University of Alberta students who took part in a rocket launch in Norway say the experience has enhanced their education and inspired them to pursue careers in aerospace engineering.

Engineering students Alberto Palomino and Shawn Smith, and physics student Marc-Olivier Lajeunesse, took part in the Canada-Norway Sounding Rocket exchange program, travelling to the Andoya rocket range in Norway to learn about the engineering, technology and science behind rockets and to get hands-on experience and launch a rocket of their own.

The program accepts students from across Canada and Norway to study and work together for a week under the eye of staff at the Andoya range. It is funded by the Canadian Space Agency through ISSET, the Institute for Space Science, Exploration and Technology, based in the the Department of Physics at the U of A.

Palomino and Smith say it didn’t matter where students were from—they shared the same interests and worked well together. It helped that the Norwegians are fluent in English, but there’s more to it than that, says Smith.

“It was we like were all following the student stereotypes,” he said. “At lunch we’d start talking, and we’d end up in a conversation about string theory.”

Palomino agrees that the atmosphere was welcoming.

“It was almost like we all could have been friends before we even got there,” he said.

The engineering students were placed on the rocket physics team. Their job was to learn about the physics of rocketry, investigate the effects of wind on rockets and run a launch simulation. They also made a prediction about their rocket’s flight path. Both students say the week of lectures and hands-on projects—including assembling and launching small rockets of their own—enriched their engineering education.

Palomino and Smith are both in the third year of the mechanical engineering biomedical co-op program, and are also interested in aerospace engineering.

“I have a huge interest in the aerospace industry and it’s something I want to do going forward,” said Smith. “It’s one of my interests; the other is biomedical engineering. There are some very specialized areas where the two overlap.”

“Ever since I was a kid, one thing that has fascinated me is knowing how airplanes and rocket ships work,” Palomino said. “It’s an ongoing motivation to continue in engineering. The opportunity to learn more about space science was great. One thing they talked a lot about was the northern lights, and I learned a lot.”

The international student team did manage to launch its rocket, a sounding rocket that stood more than eight feet tall on the launch pad and soared to an altitude of about eight kilometres at speeds approaching 2,200 km/h.

Watching the rocket take off—and understanding how it worked—wrapped up a fascinating week for the students.

Students get a taste of rocket science
Newsroom