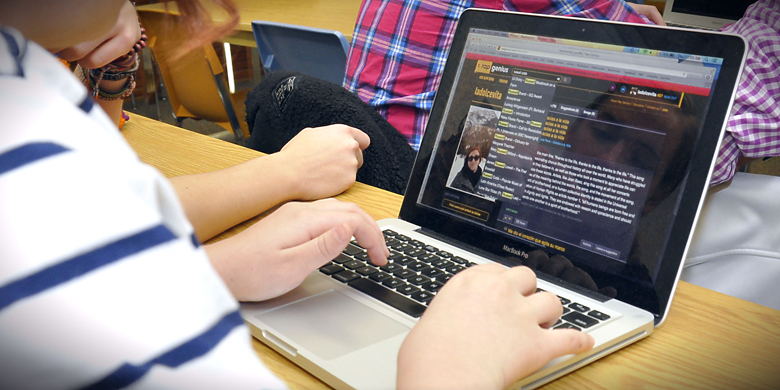 131206-rapbanner
Bita Wensel annotates song lyrics of a Latin American artist using the website Rap Genius. Wensel and her classmates have not only created annotations, they’ve collaborated with an entire online community, often half a world away.

(Edmonton) It doesn’t take genius to appreciate the rhythm of Latin music, but for a rich understanding of the poetry and history of the lyrics, genius sure comes in handy—especially the online variety.

For the past semester, students in Russell Cobb’s third-year popular music of Latin America class have not only created annotations, they’ve collaborated with an entire online community that gets on average half a million page views a day.

“It’s been unlike anything I’ve ever done in the classroom in the sense that it’s truly, truly collaborative,” said Cobb. “Once students figured out it was so versatile, that they could work together and get feedback from so many people—sometimes half a world away—they really got enthusiastic about it.”

Users create an identity and receive points for creating annotations, scoring even more if they’re popular with the site’s several hundred editors from around the globe. With enough points, users become editors and help gauge the quality of annotations. The crowdsourcing not only creates a better product, it’s turned into a game for the class, Cobb said.

Like many of her peers, Jacqueline Odera hadn’t heard of Rap Genius before the start of the semester, despite being a fan of hip-hop. The fourth-year Latin American studies major said that during class time it’s only possible to cover a few musical genres, but there are no constraints in the online world.

“It allowed me to go more in-depth into my personal interests,” she said, which include learning about Brazil’s tropicália movement from the late 1960s to early 1970s, and modern artists influenced by that period.

“I learned a lot about the artists involved and the genre. And because all the music is in another language—I’m trying to learn Portuguese—I’ve learned all the slangs and idioms artists use. The world has opened up.”

For their final project, students were required to annotate the lyrics of 10 songs. Some have been more prolific than others to the point where Rap Genius has invited a few, like Tyler Hamblett, to become an editor. Hamblett says she’s enjoyed connecting with people in an open-source space.

“You get to learn things you never really thought about, which was a really interesting and new challenge.  I never listened to Latin music at all, and now I feel like I have an in-depth knowledge of it.”

The U of A is one of just a handful of post-secondary institutions using Rap Genius—and appears to be the first to use it to teach about Latin music. Cobb says his project has raised some eyebrows among scholars because its crowd-sourced editing process is similar to that of Wikipedia, but once you get over the initial resistance, there’s a lot to like.

“Once I took that leap of faith and realized it was going to be a little messy, the enthusiasm of the students won me over.”