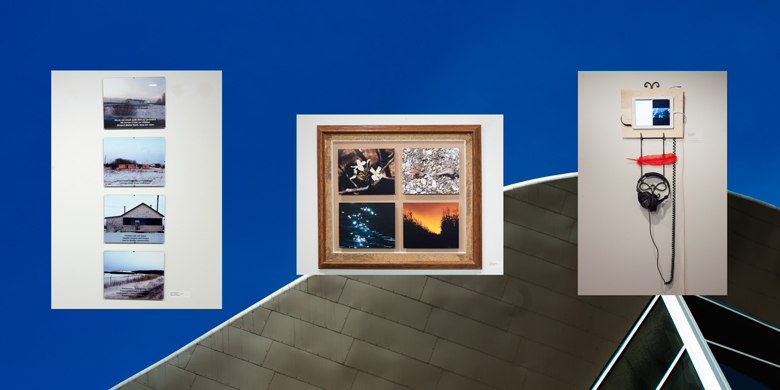 130419-aga-symbols-banner
(From left) Svitlana Panenko's Past… Present… Future?, Erin Hunt's Elemental Beauty and Mohamad Mahfouz's video The Promised Land are among the student pieces on display at the Art Gallery of Alberta. (Image: Richard Siemens)

(Edmonton) From the peace sign popularized during the tumultuous ‘60s to more recent iconic images from the Idle No More and Occupy protest movements, symbols can represent both forms of oppression and expressions of hope. Now, a University of Alberta researcher and 40 students are using art to examine the power of such symbols.

“I’ve asked students to use symbols and symbolic language to produce art, to use art as a type of laboratory to do social science research,” says Michael MacDonald, who teaches in the Department of Music and the Department of Modern Languages and Cultural Studies at the U of A.

The result is Occupy the Gallery, a multimedia exhibition of his students’ work on display until April 29 at the Art Gallery of Alberta.

MacDonald says the project helped students contribute to discussions about the use of symbols to transform societies and understand the role of art.

Erin Hunt, one of the students, peered through her camera lens to capture Elemental Beauty, a piece that illustrates nature’s power and the need to protect it—a duty she says should not be exclusive to Aboriginal people. Her childhood experiences provided a connection with the environmental issues the Idle No More movement raised.

“Growing up, I was never inside for more than I needed to be, to eat, sleep and wash. We lived beside the Laurier off-leash park, and there was a huge garden in our yard with seven-foot-tall cornstalks. We would just run through them and pull corn off, eating straight from the garden,” Hunt says. “I’m challenging people to take a look at their own relationship with the Earth, to see if they can make the kind of commitments to the Earth I have on the piece, to respect and protect mother Earth.”

In Past… Present… Future?, another student, Svitlana Panenko, continues the theme of universal responsibility for the planet. She says her piece, which portrays destitution and hope using a similar medium, shows the complexities of Idle No More.

“The images are gray and depict deserted streets. There are no signs of life. I juxtapose that with optimistic and warm texts that urge us to keep our community clean, reminding us that children are our future and that a healthy community is a healthy future for them and the entire community.”

Mohamad Mahfouz’s video piece, The Promised Land, has provoked emotional responses from some gallery patrons, which he finds humbling. His piece draws parallels to his country.

“When I watched it after installation, I had goosebumps,” he says. “In Lebanon we have a sense of connection with the land and what it means to us. The piece was my interpretation of what land means to me. I sympathize with Aboriginal people; they had a lot of promises that were unfulfilled, and land, being one of the most precious prizes, was robbed from them.”

This is the first time U of A students are exhibiting at the AGA—a partnership that MacDonald says will strengthen the university’s community connections and enrich undergraduate education.

“I hear people talk about what happens in the ‘real world’ in a way that does not recognize that the university plays an important role. We’re an intellectual institution, and it’s the job of the university, students and faculty to engage in public discourse at public spaces for the public good,” MacDonald says.

“One important thing we’ve done now is develop a relationship with the AGA so that students can produce work that can be publicly displayed, which gets students’ work off campus and puts it in a space where the community can access it.”

Researchers at the University of Alberta have discovered a novel, second mechanism of action by the antiviral drug remdesivir against SARS-CoV-2, according to findings published today in the Journal of Biological Chemistry. The research team …
Read more from this release