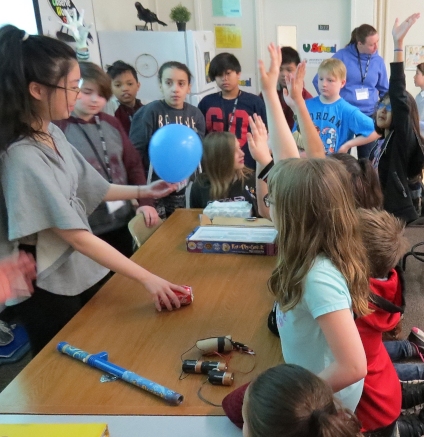 U School students answer questions during a science experiment. Students get a taste of everything from astronomy and paleontology to art and photography, gaining knowledge and skills they can use throughout their lives. (Photo: Gina Loewen)

“It made me realize that university wasn’t a big and scary place,” said U School graduate who is now a third-year computing science student. 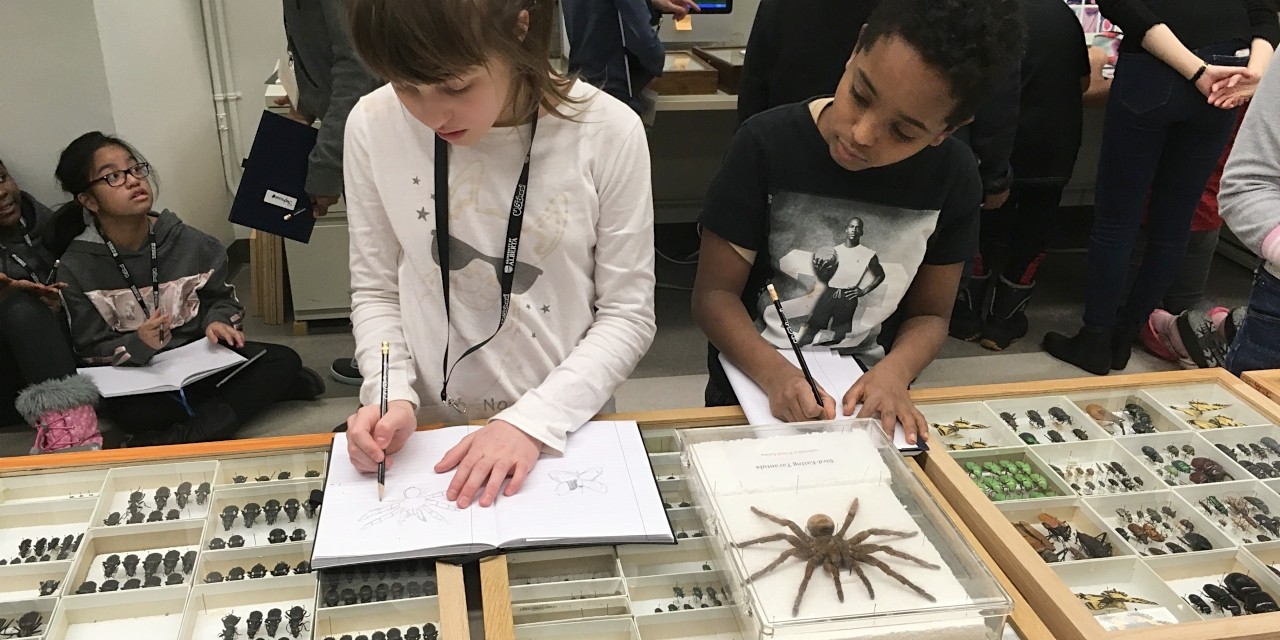 Grade 5 students from St. Catherine School in Edmonton work on their entomology journals at U School. The week-long program gives grade-schoolers a chance to see the possibilities of a U of A education. (Photo: Mel Woloszyn)

Staring at the sun isn’t typically a good idea. But Max Melendez De La Cruz distinctly remembers the day he gazed through a telescope at the giant orange orb.

As a Grade 9 student from an inner-city school, Melendez De La Cruz visited the University of Alberta Observatory in 2012 as part of U School, a week-long exposure to life on campus. Instead of textbooks, it was an opportunity to learn first-hand.

“That was my first time looking through a telescope,” said Melendez De La Cruz. “It was seeing something from reality.”

The brainchild of Sandra Woitas, a former U of A senator and inner-city educator, U School was conceived as a way of opening up the campus to students who might not be familiar with the university. After a small pilot of three classes in March 2009, the program now sees 800 students a year over a 35-week period.

U School offers its program primarily to students from socially vulnerable or marginalized communities—including Indigenous communities or schools with high numbers of newcomers or single-parent families—who might not otherwise see themselves attending post-secondary. In addition to building confidence for budding students, an intensive campus experience can be a revelation of the potential of education.

Depending on what they’re learning, students might dissect chickens at the Poultry Research Centre, watch fossils emerge at the Paleontology Museum or contemplate Alex Janvier’s answer to a colonial mural in the Rutherford Library.

Key to the experience are the roughly 400 academics and students who volunteer each year. For student and alumni volunteers—some from similar backgrounds as participants—U School is an opportunity to bond and connect. For professors and graduate students, it’s a respite from abstracts, experiments and papers.

“Kids will ask whatever is on their minds,” said Mel Woloszyn, U School’s program lead. “And they get to do experiments and activities they don’t get to do in class.”

Woloszyn first volunteered back in 2010, finding the experience a “really nice break from the library.” Having earned degrees in science and education, she returned three years ago to lead the program. She helps match experts from dozens of faculties and builds lesson plans to meet the needs of each class.

While each iteration of U School is different, core features tie each class together. Students reinforce learning through journalling. They test out interviewing skills in 45-minute sessions with students and alumni. And after students are taught about photography, they’re dispatched across campus to put their lenses to work. The resulting photos often transform into art projects and calendars—and tangible skills the students can use throughout their lives.

At the end of each year, students walk across a stage in a graduation ceremony designed to help students “envision themselves 10 or 15 years down the line.”

Woloszyn said U School has received incredible feedback over the past 10 years, but added efforts are underway to quantify the short-term and long-term impacts. The majority of U School graduates haven’t yet graduated from high school, but Woloszyn knows of at least 40 students who have returned to the U of A campus.

Melendez De La Cruz sees the payoff in his own life. As a 10-year-old, he watched his parents pull up roots in northern Mexico following the 2008 financial crisis. In a new country with few language skills, his agricultural engineer father worked in landscaping to pay the bills and build a better future for his family.

Education was already a high priority. U School was a “pretty eye-opening” opportunity to see what the future might hold.

“The campus seemed very huge to me,” said Melendez De La Cruz. “It made me realize that university wasn’t a big and scary place.”