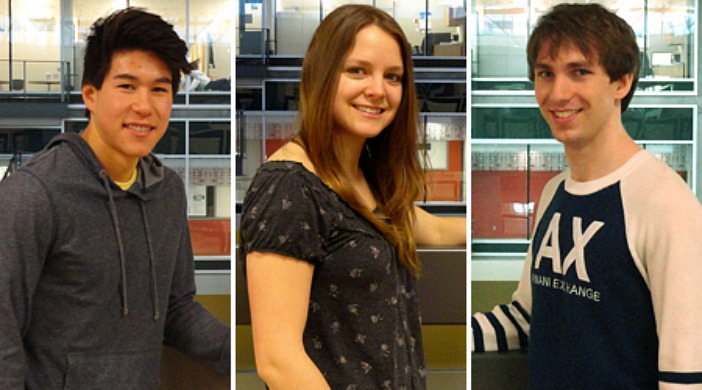 (Edmonton) Extraordinary opportunities are available at the University of Alberta, if you just try. It’s a lesson not lost on a trio of mechanical engineering students who will be launching a rocket in Norway as part of an international exchange program.

“When I first heard about this exchange I thought it was this amazing program for the extraordinarily gifted, that it was something I could never get into,” said fourth-year engineering student Brandon Kwong. “Another problem was that you miss a week of school, and I thought I could never manage that.”

But Kwong's concerns didn't stop him from applying to the Canada-Norway Student Sounding Rocket (CaNoRock) exchange program, and he was accepted. He and a handful of U of A students, including fellow engineering students Chelsea Morin and Brian Graves, will work at the Andoya Rocket Range in Norway Jan. 14 to 19. The program is organized through the University of Alberta's Institute for Space Science, Exploration and Technology. At Andoya, they will learn about space systems and equip a sounding rocket with a variety of sensors. When the rocket is launched, they will analyze the data it collects and compare the data with predictions they made about its flight.

Chelsea Morin, a fourth-year mechanical engineering student specializing in biomedical engineering, says she also thought being accepted into the program was “a bit of a long shot” and says the experience will help as she plans her career.

Morin, who is also a senior member of the U of A ringette team, is scheduled to graduate with a mechanical engineering degree and added biomedical engineering credits this spring. She is taking prerequisite courses to study medicine in case she chooses to do so. The CaNoRock experience provides even more career possibilities for her.

“I’ve kept so many windows open for my career and this just adds another area. I might find out that I’m really interested in this and want to pursue a master’s or PhD,” she said.

Fellow fourth-year mechanical engineering student Brian Graves is excited about the program, saying that aeronautic engineering “has always been on my radar.”

“The aerospace industry is definitely a big interest of mine,” he said.

Like his classmates, Graves says there was a time when he wouldn’t have considered applying for CaNoRock.

“Had this been in an earlier year, I probably wouldn’t have taken it up because I wouldn’t want to miss a week of classes and fall behind,” he said. “But at this point I realize I can catch up. It’s not the end of the world—it’s an amazing opportunity.”

Carlos Lange, a mechanical engineering professor who designed a critical weather monitoring device used on the Mars Phoenix lander and who helps co-ordinate the exchange, says CaNoRock is a challenging program.

“It’s no walk in the park,” said Lange. “Their day at the rocket range will begin at 8 a.m. and end at 8 p.m., or later. They’re worried about missing class time, and that’s one reason all of the selected candidates are good students who care about their courses.”

There’s also an undeniable “cool factor” involved with the program.

“One of the coolest things is that Brian and Brandon and I get to pursue this together,” said Morin. “I’m just looking forward to seeing a rocket launch, knowing that we contributed to it.”