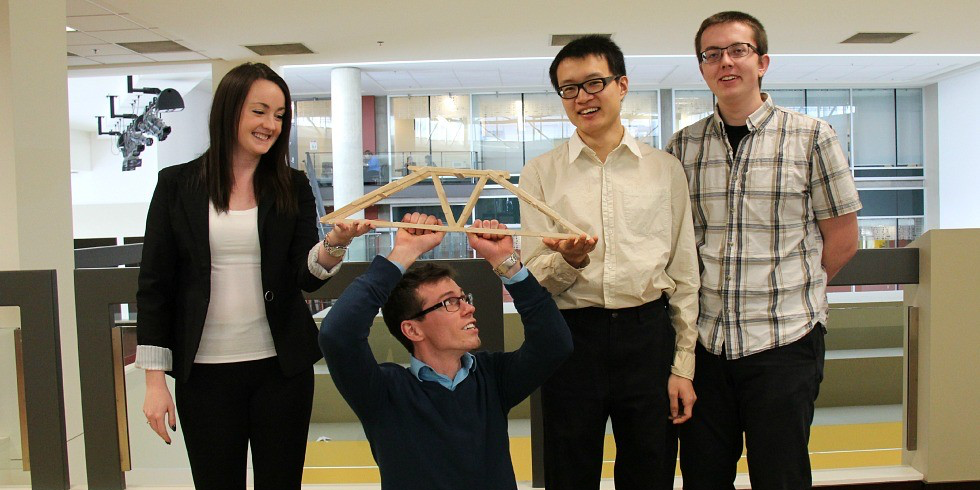 (From left) Civil engineering students Randi Buchner, Brett Morgan, Tony Dong and Jeremy Maetche are raising funds to get to the national Popsicle stick bridge building competition. They say they could build a bridge capable of holding the weight of three pickup trucks.

(Edmonton) How much weight can a bridge made from Popsicle sticks carry? You’d be shocked. University of Alberta civil engineering student Tony Dong is planning to build one that could hold the weight of two or three pickup trucks. He’s confident the bridge can be built—the problem is raising funds to get to the Canadian national Popsicle stick bridge building competition, in March.

To finance the trip, he and four of his fellow students have launched an online fundraising drive on Indiegogo, hoping to raise $5,000 by Dec. 12.

Dong has reason to be confident: for the last two years he has broken records in the U of A competition. Two weeks ago, a bridge he made using 100 Popsicle sticks and white glue held 970 pounds before breaking. The bridge he built last year held 746 pounds.

He says the math behind his designs is “simple” and can be done by hand in about five minutes.

“The stuff I spend more time on in coming up with my designs is looking at everyone else’s bridges and seeing how every bridge fails,” Dong said. “What it comes down to is how you prevent buckling from happening under compression.”

Dong added that his bridge design this year could have held more than 1,000 pounds, were it not for rules limiting entries to 100 Popsicle sticks.

“If I was given two extra sticks, this bridge could have easily stretched way beyond 1000 pounds.”

The national competition, being held in Montreal in March, gives competitors about 3,500 Popsicle sticks. With that much material, Dong feels he and his team, fellow civil engineering students Brett Morgan, Randi Buchner and Jeremy Maetche, could build a bridge that might hold the weight of three pickup trucks.

“People may not take this seriously, but you’re trying to a make a few thousand Popsicle sticks hold 3,800 kilograms,” he said. “This is just a scaled version of the real thing. Concepts learned in class can be applied to the Popsicle stick bridge in a very practical manner.”

Another reason to support the U of A engineering team: Dong says the University of Calgary is sending about 30 students.