From simple tips for parents to presentations at a conference in India, Risha Dutt is spreading the word about how the bedroom affects behaviour. 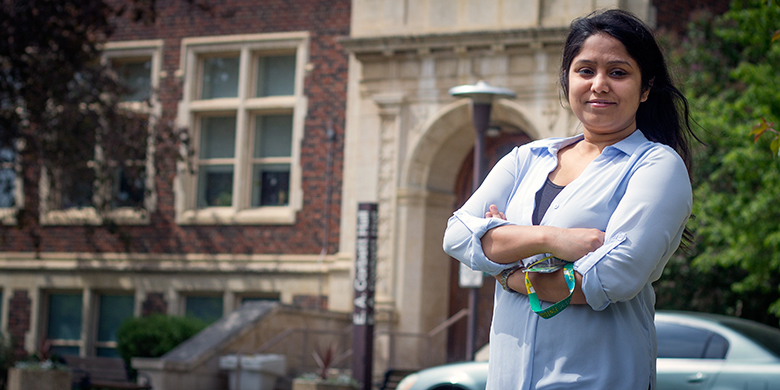 Risha Dutt is making an international impact with her research on links between the bedroom environment and nighttime behaviour among children with cerebral palsy.

(Edmonton) We all know what it’s like to wake up and wish we had another couple hours’ slumber before beginning our day, but children with cerebral palsy have a hard time falling asleep in the first place.

University of Alberta student Risha Dutt says children with cerebral palsy can benefit from a cozy, quiet and darkened bedroom to help get a good night’s rest. Dutt is studying the link between bedroom conditions and nighttime behaviour, and recently presented her early findings to the Delhi Branch of All India Occupational Therapists’ Association.

“One of the problems people with cerebral palsy often experience is chronic pain. Their muscles are so much more tense,” said Dutt, a rehabilitation science master’s student in the Faculty of Rehabilitation Medicine. “When you have pain, you don’t fall asleep as easily. And now we are discovering that when you are not well rested, you feel more pain.”

“People say, ‘I’ll just go to bed earlier,’ but that doesn’t work. You just lie there wide awake,” said Dutt’s supervisor, Cary Brown, an associate professor in the Department of Occupational Therapy. “When you go into the sleep literature, there’s information about autism and children with epilepsy and other more high-profile conditions, but children with cerebral palsy have not been very well studied.”

As part of her research, Dutt, Brown and occupational therapist Amelia Rajala created a manual for parents of children with cerebral palsy—a checklist with simple tips for improving the bedroom environment to help with a good night’s sleep. Tips include reducing television and computer time before bed, making the room as dark as possible and reducing or muffling noises.

“The evidence is there that those things are affective, but parents don’t have that information. They think that having the TV on while their child falls asleep is good, but actually that’s a bad thing,” explained Brown.

Prior to coming to the U of A, Dutt worked in her native India as a consultant in private clinics with children affected by cerebral palsy. She remembers working with one patient who was very overactive and having trouble focusing on her surroundings. Dutt had been in contact with Brown while applying for the master’s program, so she had familiarized herself with sleep research. She sent some sleep tips home with her patient’s mother, and a week later they both noticed improvement.

“That’s when I knew that these techniques could make a real difference,” said Dutt.

Dutt recruited families to participate for her study through the Cerebral Palsy Association of Alberta and GRIT-Inclusive Early Childhood Program in Edmonton. The parents follow suggestions in the manual and report back on how well they work to improve their child’s sleep. Dutt is also using her ties in India and on Facebook to gather data online.

The Delhi branch of the All India Occupational Therapists’ Association invited Dutt to come and give a talk on her study. The initial presentation went so well, they asked Dutt to give three more before she returned to Canada.

“Our graduate students are all conducting research with wide applications. It’s gratifying that Risha has had the opportunity to go home and present new information to her peers,” said Brown.

Dutt plans to finish analyzing the data she is collecting about bedroom modifications by August. Then, it’s back to spreading the word among parents and therapists, both in Canada and internationally.