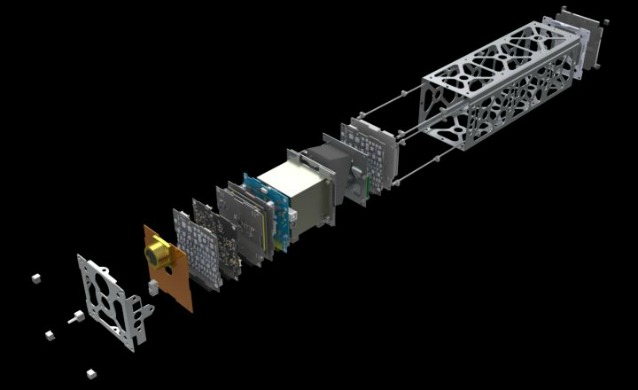 121023-studentsatellite-banner
An exploded view of the AlbertaSat-1 satellite designed by a team of UAlberta engineering students. The design won an international award for best application of nano-satellite technology to environmental issues.

(Edmonton) A student group from the University of Alberta's Faculty of Engineering has won international accolades for designing a nano-satellite that would monitor greenhouse gas emissions.

The AlbertaSat-1 Project Team won the International Academy of Astronautics’ environmental award for the best application of nano-satellite technology to environmental issues, at the Mission Idea Contest in Nagoya, Japan.

Jordan Backs, an electrical engineering co-op student who represented the U of A team and presented its design proposal at the competition, was nearly speechless about winning the award.

“It kind of made my day,” he said, clearly understating his reaction. “The entire symposium was great.”

The U of A team was up against finalists representing universities from around the world. Each team presented projects for cube satellites—small, lightweight and easy-to-manufacture satellites that are inexpensive to produce and launch.

About the size of a loaf of bread, the AlbertaSat-1 design is aimed at monitoring greenhouse gases in the province with more precision than existing satellites offer. The group initially designed the satellite to enter the Canadian Satellite Design Competition. But when the opportunity arose to enter the mission idea competition, the team decided to enter the international arena.

Backs says the experience at the competition and symposium has made him reassess his career and education plans. He is now thinking of ways he might apply his engineering education to cube satellite design professionally, or through advanced studies.

“There are a lot of doors and opportunities out there that I never knew existed,” he said.

Students who participate in projects like AlbertaSat-1 are inspired by recent advances in space exploration and technology, says mechanical engineering professor Carlos Lange, who designed a delicate weather monitoring instrument that was used on NASA’s Mars Phoenix Lander.

“By participating in these competitions, students not only get to use their course training and their talent in real-world applications in this field, but their motivation drives them to higher levels of excellence, which are deservedly recognized by this award,” he said.