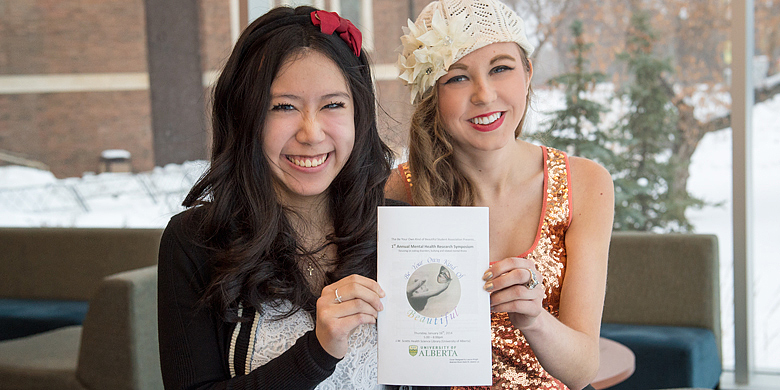 Jessica Luc (left) and Vanessa Peynenburg are co-presidents of the Be Your Own Kind of Beautiful Student Association. The organization is holding its first symposium showcasing mental health research at UAlberta. (Photo: Richard Siemens)

(Edmonton) Vanessa Peynenburg can’t pinpoint how or when she developed anorexia as a 15-year-old, but she knows bullying was a factor. Every day her tormentors at school urged her to do the world a favour and kill herself.

As Peynenburg’s sense of self-worth plummeted, her eating habits changed. She didn’t skip meals but greatly restricted her calories and ate alone, distancing herself from family and friends.

“I think of my eating disorder as the bullies manifesting themselves in my head, almost,” she said.

Jessica Luc’s experience with bullying started even earlier, in elementary school. She switched schools three times, trying to escape and find a place where she felt like she belonged. Instead of finding acceptance, she retreated inward and shrunk from view.

“It really affected the way I saw myself—I stood differently and held myself differently than I do now,” she said.

Both women, now 19, overcame their bullies and are standing tall as students at the University of Alberta. The pair co-founded and are presidents of the Be Your Own Kind of Beautiful Student Association, which is dedicated to raising awareness about eating disorders, bullying and mental illness.

Since its founding two years ago, BYOKOB has gained 85 members whose aim is to help other students and members of the community find beauty within. They’ve organized an annual all-sizes fashion show, held photo shoots that challenge popular notions of beauty and are working on a documentary film dedicated to the memory of those grappling with eating disorders and mental illness and those who’ve lost the battle.

Now, the organization is holding its first ever Mental Health Research Symposium as a way to showcase all the work being done at the U of A on the issues of eating disorders, bullying and mental illness. The symposium’s keynote speakers include registered psychologist Kristine Aanderson and psychiatrist Lara Ostolosky, both of whom work with people who have eating disorders, as well as oral and poster presentations from undergrad and graduate students.

“People are usually not reluctant to speak about cancer or a fractured limb, yet they whisper about mental health issues and avoid asking questions about it,” said Luc. “The brain is a body part too, we just know less about it. There should be no difficulty in discussing or seeking help for an illness that is affecting so many individuals in the community. We’ve got to get rid of that stigma, and this is what the symposium is about.”

All presentations will be open to the public with content posted online afterward. Even people currently receiving treatment for eating disorders have been invited, making it a true community event.

“Even when you’re going through it you still have a hard time understanding what’s going on and why it’s happening to you,” said Peynenburg, whose own struggles with anorexia happened gradually, and with plenty of denial. “We just want to educate as many people as possible about the symptoms and what can be done to treat it.”