Posters offering advice and social appeals reduce paper use in computer labs by more than eight per cent. 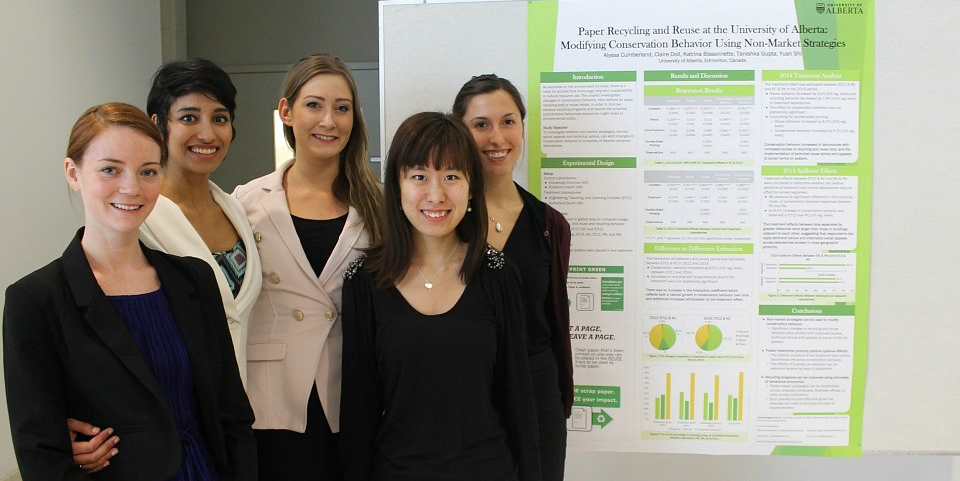 (Edmonton) Five University of Alberta students discovered that posters with advice and social appeals helped to save paper in computer labs at the university.

Katrina Bissonnette, Alyssa Cumberland, Claire Doll, Tanishka Gupta and Yuan Shi, all students in the Faculty of Agricultural, Life and Environmental Sciences, found that paper consumption decreased by 8.5 per cent after they placed posters in labs at the Engineering Teaching and Learning Complex and Rutherford Library South.

The messages also had positive spillover effects in nearby labs.

The group presented their findings alongside five other projects at the Department of Resource Economics and Environmental Sociology’s capstone course presentations in late April.

Half of the posters instructed students how to reuse paper; the other half promoted paper conservation as a socially desirable behaviour. The students surveyed nearly 500 students to gauge their conservation habits, and tracked the increases in conservation behaviour by comparing data from a 2012 survey collected by a community service-learning class.

Inspired by an apparent lack of reinforcement of the “reuse” side of the popular “reduce, reuse, recycle” maxim at the university, the group mentioned that their findings have broader applications to expanding environmental policy beyond market strategies.

“One of the implications of this into the policy world is that you don’t necessarily need to have a poster in every room. You can place them somewhere and people are going to internalize the social norms and maybe apply the learning that they see on these posters into varying nearby areas,” said Doll.

“There is room for innovation with environmental policy, there is room for improvements, and it’s clear that we can improve conservation behaviour in computer labs with relatively low costs.”

The project was conducted in association with the university’s Office of Sustainability to improve the office’s outreach materials.

Two of the other projects presented also played an advisory role to specific university clients, with one analyzing the financial autonomy of the U of A’s Prairie Urban Farm, and another proposing a self-sustaining financial structure for the Natural Resources Analytical Laboratory. The three others compared the price volatility of major grains in the last three decades, the market consequences of the unauthorized release of genetically modified wheat, and how gift-giving networks affect food security in Tanzania.