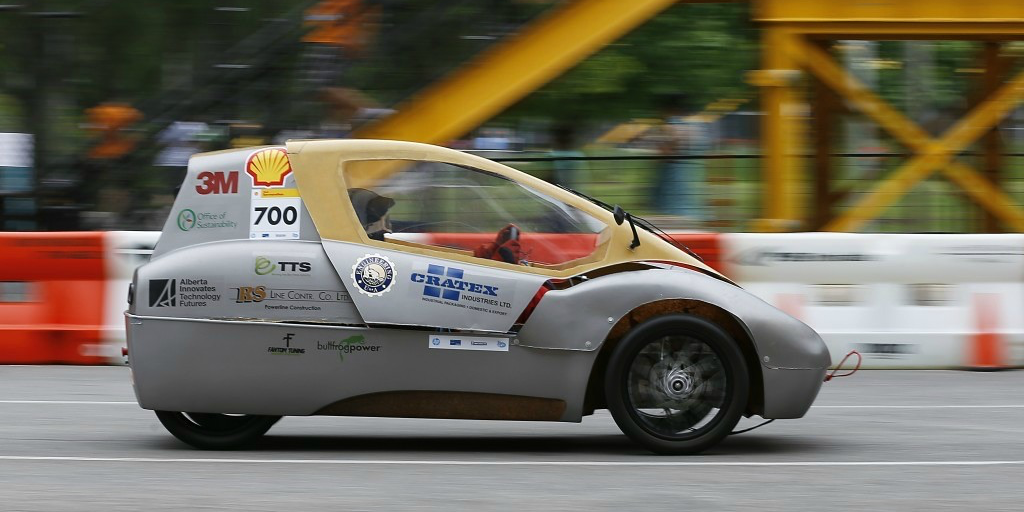 (Edmonton) A team of students from the University of Alberta won first place at an international competition, driving their vehicle to victory by getting the equivalent of 618 miles per gallon (0.1 L/100 km).

Based in the Faculty of Engineering, the U of A EcoCar team took top spot in the urban design – hydrogen cell category of the Shell Eco Marathon – Americas, held last weekend in Houston, Texas. The category features cars built by students from across North and South America, powered by hydrogen fuel cells and designed to look consumer-friendly.

Team captain Balazs Gyenes says he was thrilled with the win and impressed by the work of everyone on the team.

“I’m really proud,” he said, adding that the team had to work hard just to get their car off the line.

With an emphasis on safety, vehicles are required to pass a technical inspection before competing on the road. The EcoCar team worked on a variety of issues Friday and Saturday but made it to the start line bright and early Sunday morning.

After two rounds on the six-mile track, scored at 528 and 598.7 mpg, team members felt satisfied that they’d done the best they could and sat down for a celebratory lunch.

But in typical engineering fashion, it wasn’t long before talk turned to how the team could squeeze even more efficiency out of the engine and earn an even better score. Gyenes had a theory about performing a slight tweak on the engine setup to gain a substantial boost in energy efficiency.

“You can do as many runs as you want to on the track, so I was pushing the team to do more stuff,” he said. “We all knew that once the car comes back here we won’t be doing tests for a couple of months at least, and we knew that this was our one last chance to do testing, right there in a race setting, and get a number back, which is months away from us here at home.”

Emboldened by their earlier performance and eager to move into more experimental territory, the team performed the adjustments Gyenes was suggesting and returned to the track. Disaster struck at the start line—the engine wouldn’t even start and the team had to do some troubleshooting.

On their return to the starting line the engine started and the car cruised to its highest score of the day, achieving more than double the engine efficiency of the University of Missouri team’s car—the only other team competing in the urban design – hydrogen category.

“Canadian teams bring it,” he said.

But naturally, he’s most proud of the U of A team. Gyenes says the students who travelled to the competition are only a small part of the entire team, which has about 30 members.

“Our team was just five people at beginning of the year. To build our finances and documentation and the structure, and to grow in numbers the way we did, was great,” he said. “I’m very proud of the whole team.”