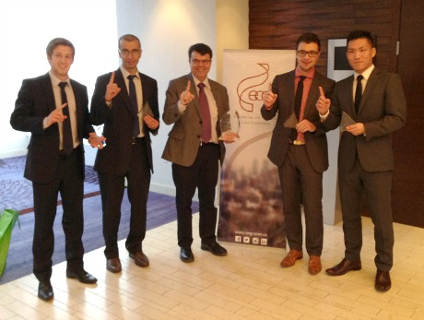 UAlberta students from two faculties team up for winning combination of engineering smarts and business savvy. 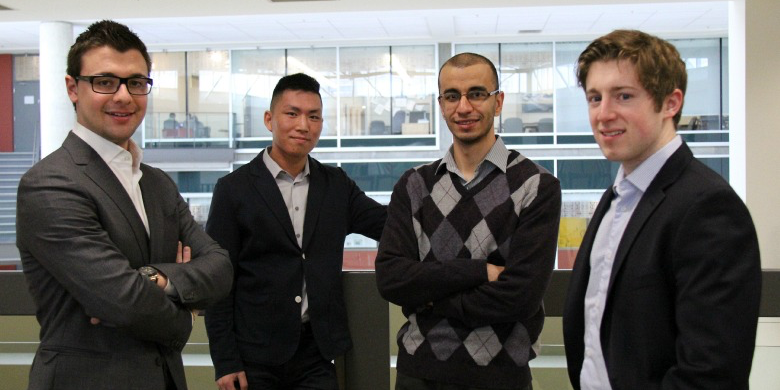 (Edmonton) University of Alberta students from two faculties teamed up to take first place at an international competition that demands engineering know-how and business savvy.

Fifth-year chemical engineering students Brad Leonard, Henry Lau and Ahmed Ibrahim, and business student Scott Jelec, emerged as the top university squad at the Engineering and Commerce Case Competition, held March 12–16 in Montreal. The competition requires teams to come up with engineering and business solutions to a range of challenges.

The team worked under the supervision of chemical engineering professor Bill Pick, a former global process engineering technology leader with Dow Chemical who now holds the McGee Chair in Process Design in the Department of Chemical and Materials Engineering.

Over three days, the teams were given different scenarios to tackle in pressure-filled, timed events. The U of A team members admit they felt like underdogs at first, after talking to other university teams that had been together longer and had practised working together to solve problems for months.

“We thought we were the least practised team there,” said Jelec.

But after the first day’s challenge—to design a gas blower out of composite materials so it wouldn’t be corroded by acidic gases—the team was well out in front. Judges awarded the team 121 out of a possible 150 points; the next-best team scored just over 100. Teams were judged on their engineering solution and on the business and marketing plans they presented along with it.

Buoyed by victory, the team placed second in the next day’s challenge and maintained its first-place overall spot, in a complex six-hour competition to help a brewery company improve its efficiency at a warehouse and distribution centre. The team’s role turned to that of consultants and it placed well by developing four original courses of action rather than focusing on the company’s proposed solutions.

Then the competition was turned on its head.

After announcing the four final teams that would compete the next day, organizers surprised the teams with a late-night announcement that the final project was beginning that night.

Starting at 11 p.m., the teams went to work preparing a Dragons’ Den style of pitch they would make to a panel of nine investors the next afternoon. Their task was to secure investment for a startup company based on brain–computer interface technology.

The U of A team came up with a product that would monitor infants’ brain activity, tracking brain development and letting parents and caregivers know whether the baby was awake or asleep, and felt relaxed or stressed. The team’s business plan included expanding into geriatric care, enabling caregivers to monitor frail senior citizens.

“Some of the universities didn’t have a coach there, so the fact that he was even there was really huge,” said Leonard.

In the final event, the U of A team came out ahead of teams from Ryerson University, the University of KwaZulu-Natal in South Africa and Universidad Iberoamericana in Mexico City.

The students say they were prepared for the competition by their classes and through experience on work terms. Leonard, Ibrahim and Lau are in the engineering co-op program, which provides students with 20 months of paid engineering work in four job placements, and Jelec has landed summer jobs in business that he says helped him improve many skills, including valuation.

“Our design course encompasses most of the tasks we had to do during the competition, minus the marketing, and compressed it into eight and six hours,” said Leonard. “You’re given a problem, you research a solution, engineer it, build schedules and do the economics and financing.”

“Our co-op experiences helped us a lot too,” added Ibrahim. “Given our experience in the field, given that we have gone out and done engineering work, we were confident. It’s one thing that separated us from the other teams.”