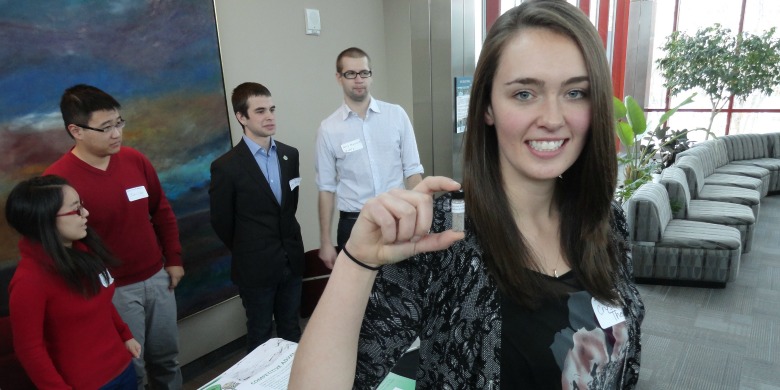 (Edmonton) A student group from the University of Alberta won first place at an international competition after discovering a way to turn waste paper into valuable chemicals.

Nine students from the Faculty of Engineering and the Faculty of Science won the entrepreneurship category of the International Genetically Engineered Machine (iGEM) competition at the Massachusetts Institute of Technology.

The students developed plans for a startup biotech company called Upcycled Aromatics to turn paper that cannot be recycled into high-value specialty chemicals including shikimic acid, a key ingredient in the flu-busting prescription drug Tamiflu.

The team projected it would earn $4.5 million in annual revenues from shikimic acid production alone at just one site, using waste paper from the Edmonton Waste Management Centre. The technology the students developed is set up at an industrial scale and fits into a standard industrial-sized cargo container.

Chemical engineering student Crystal Theodore says working with an interdisciplinary team to design the system was an exciting and valuable experience.

Theodore originally began her academic career with two years of biochemistry at the University of Lethbridge, but decided to pursue engineering at the U of A.

“I realized I was more interested in the application of science than the research side,” she said. “And chemical engineering is so broad that it applies to physical science and life sciences together with mathematics and economics.”

Judges at the competition noted that engineering and biochemistry aspects of the Upcycled Aromatics plan were virtually seamless.

“We developed our engineering applications and our biology applications hand in hand,” said Theodore. “A lot of times in biology you have things developed at the lab scale but you don’t look at how it will be implemented at the industrial scale. Engineers can look at a process and optimize it for certain conditions, and in this team we had engineering students asking the biology students questions; then both aspects are developed together.”

The science behind the process is relatively straightforward, according to biochemistry student David Brown. The waste paper is a rich source of cellulose, a food source for the bacteria Pseudomonas putida. The team inserts a metabolic pathway into the bacteria, enabling the bacteria to convert the cellulose to glucose, then convert the glucose into different chemicals.

With easily made genetic tweaks, the company could also produce cinnamic acid, commonly used to manufacture artificial sweeteners, and hydroxycinnamic acid, which has applications as varied as perfumes and pharmaceuticals.

The feed stock for the company would be free because the Edmonton Waste Management Centre actually pays to dispose of the unrecyclable paper.

A former captain of the U of A Golden Bears cross-country running team, Brown knows about working in a group dynamic. But he says this experience took his knowledge and skills to a new level.