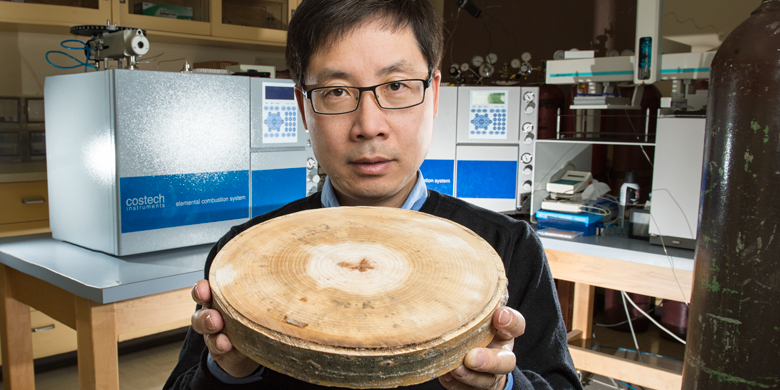 (Edmonton) Ongoing work by University of Alberta researcher Scott Chang is providing cautious optimism about how forest soil and trees are coping with oilsands development in Northern Alberta.

Studies published this year in Ecological Indicators, Atmospheric Environment and the Canadian Journal of Forest Research focused on the effects of airborne pollutants on boreal forests and soils in the Athabasca oilsands region. Findings indicate that, for now at least, the ecosystem appears to be managing nitrogen and sulfur emitted into the air by mining and upgrading activity.

“While the research isn’t indicating whether our findings are either good or bad, we can be carefully optimistic,” said Chang, a professor of forest soils and nutrient dynamics in the U of A’s Faculty of Agricultural, Life and Environmental Sciences.

“There are no signs of soil acidification occurring in the boreal forest ecosystem surrounding the oilsands. The ecosystem is handling the nitrogen and sulfur deposition without negative environmental effects observed,” Chang said.

Some of the work is drawn from a 10-year research project that wraps up in 2015, aimed at projecting what the maximum load of nitrogen and sulfur depositions could be before negative impact on the ecosystem occurs, as oilsands activity continues under current emissions standards.

High levels of nitrogen and sulfur that settle onto the soil can cause long-term acidification, leading to nutrient imbalances in forests and in some tree species, death. As well, long-term heavy nitrogen deposits would cause eventual saturation in the ecosystem, and lead to a process called eutrophication, which can affect water quality and result in blue-green algae in boreal lakes.

In conducting the research, Chang and his team focused on mixed-wood forests and soils both close to and about 100 kilometres south of oilsands operations.

One of the studies measured tree rings from 60-year-old aspen and jack pine stands, dating back to when mining activities began in the area in 1967. Testing nitrogen and carbon isotopes from the wood, the researchers found that changes in the isotope levels over the years reflected the development of oilsands mining activities but that overall, the trees had adapted as mining levels increased in the area. “At this point, the changes haven’t negatively affected tree growth,” Chang noted.

In fact, the nitrogen is filling a deficiency and helping forests grow, he noted. Because of Northern Alberta’s cool climate, leaf litter on the forest floor decomposes slowly, tying up nutrients needed by the trees, which the nitrogen deposition helps supply. “The trees are consuming the extra nitrogen that is emitted from oilsands mining,” Chang said.

In exploring how nitrogen and sulfur emissions and deposition affect forest soils in the area, Chang’s team also conducted a simulated experiment in a boreal forest largely untouched by oilsands activity. Nitrogen and sulfur was applied to the soil in amounts about 10 times higher than their deposition rate in the oilsands, and acidification levels were tested. “So far we don’t see any negative impact,” Chang said.

Although soil acidification is just one of the environmental challenges linked to the oilsands industry, awareness of the issue is important, Chang said. Excessive levels could one day be reached without watchful monitoring and management, he warned.

“If after 10 years of high levels of nitrogen and sulfur deposition we find the ecosystem is changing, that is solid data to offer the government in terms of forming policy in controlling emissions.  And this research would also help define the upper limits of what the ecosystem can handle.”

Chang’s research was funded by the Natural Sciences and Engineering Research Council of Canada, the Cumulative Environmental Management Association and Alberta Environment and Sustainable Resource Development.