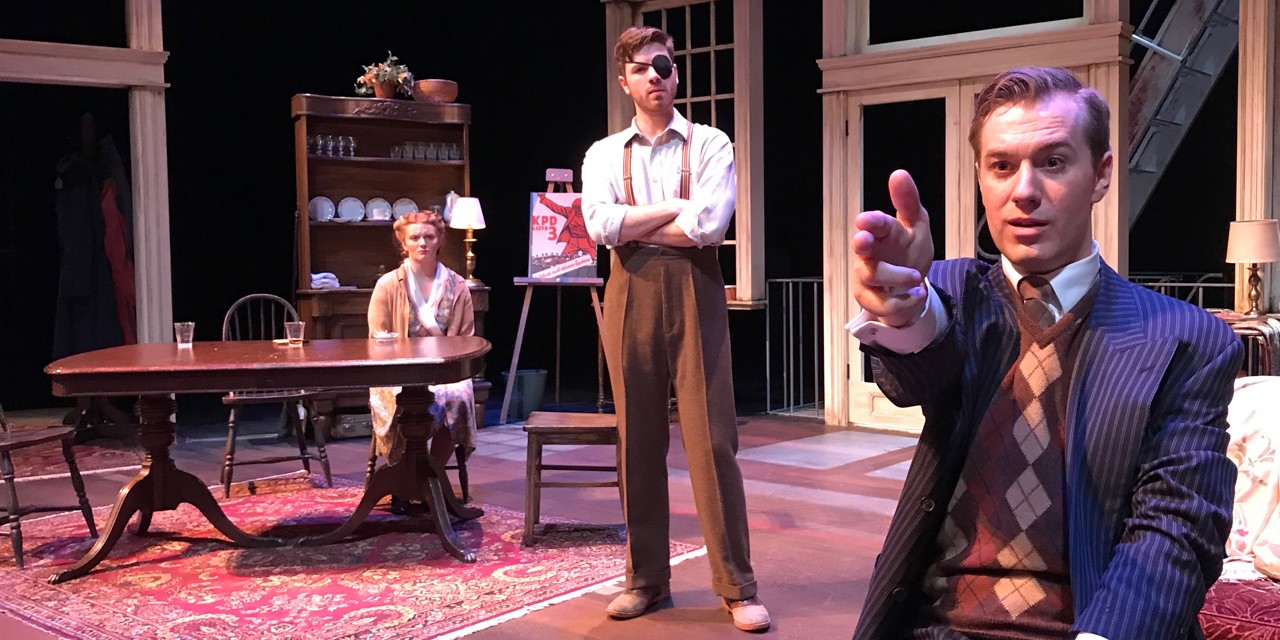 Studio Theatre's A Bright Room Called Day runs from Oct. 12-21 at the Timms Centre for the Arts.

In the original version of Tony Kushner’s A Bright Room Called Day, scenes alternate between 1930s Germany and 1980s America, probing the political conditions that give rise to the darkest side of humanity. Kushner’s first play was controversial when it first hit the stage in 1985, drawing fire for comparing Ronald Reagan to Adolf Hitler.

Kushner felt Reagan’s America was flirting dangerously with fascism and wanted to expose what he saw as a toxic moment in its history. But he could see that the 80s context would give his first play a limited shelf life, so he suggested subsequent productions should be adapted to their own times.

Thirty years later, one could argue America has fallen further into the abyss Kushner tried to warn his audience about. It was around the time of Donald Trump’s election last November that Brenley Charkow, looking for a play to direct for her drama master’s thesis, decided to take up Kushner’s invitation to adapt A Bright Room to our current moment.

“The play wasn’t my first choice, but I was just so affected by what was going on, I knew I wanted to respond in some way to it,” said Charkow. “For me it's really important to choose a play that speaks to the now. Even if it’s a classic, you have to ask yourself, ‘what is it saying?’

“I am interested in exploring the imperfections of humanity, the cyclical nature of history and why we don’t learn from our errors,” she added.

Opening this week, the Studio Theatre production of A Bright Room is only the second time the play has been seen in Canada. Revisions to bring it up to date were fairly substantial, says Charkow. She changed all the Reagan references to Trump, incorporated the recent Charlottesville riot as a crucial trigger event in the play, and had her central character blog her opinions instead of write letters.

The crux of the play involves a group of artists in 1930 Berlin who struggle with whether or not to resist the growing political terror they see around them. Their scenes are interrupted by a parallel presentation of events in America in the 1980s, in which a modern-day activist, Zillah, insists on taking action to fight repression and authoritarianism.

"Right now, things are happening so fast, especially with the revolving door at the White House, that the adaptation was starting to become quite a daunting challenge,” said Charkow. “But we landed on Charlottesville as the trigger event that sends Zillah off to Germany," in search of answers that might explain her own situation.

In the end, Kushner approved all of Charkow’s changes. But she admits the revision was a challenge, mainly because Reagan and Trump, while both polarizing, are such vastly different political animals.

“I knew I had to adapt the play to Trump,” said Charkow, “but to make one of the characters a Trump supporter (instead of Reagan) just really changes the heart of the piece. It goes against what the play is asking and what it's about?

"What I'm trying to ask is, how do we engage as community in the face of such calamity? How do we come together, or not? And what will you do to change the world?"

As far as cast and crew are concerned, says Charkow, "everyone is really passionate about the project and the message we're trying to convey—and the great responsibility of telling this story.”

A Bright Room Called Day features the work of students from the U of A’s acting, design, technical theatre and directing programs. It runs from Oct. 12 to 21, at the Timms Centre for the Arts.