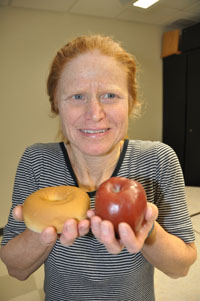 110407-largediabetes
Denise Maxwell, of the Department of Rural Economy.

(Edmonton) Middle-class wage-earners who have Type 2 diabetes appear to be healthier eaters than their wealthier counterparts.

A new University of Alberta study that measured a link between diet quality and income for people with Type 2 diabetes found that those earning $120,000 or more had lower-quality diets than patients earning between $21,000 and $60,000.

The study, which involved 49 Type 2 diabetes patients living in Edmonton, revealed that quality of diet—defined in terms of variety, adequacy and moderation—climbed steadily as household income grew, peaking at about the $60,000 mark, said Denise Maxwell, of the Department of Rural Economy. Maxwell conducted the research as part of her master’s degree.

As the salary level climbed beyond $60,000 to $120,000 and more, the quality of diet declined steadily, to ultimately drop below that of people subsisting on $21,000 incomes, Maxwell noted. As well, her study showed that people with the highest-quality diet scores spent less money on food.

The findings were surprising, Maxwell said. “We know that people living on low incomes often struggle to find a balance between budget and good nutrition, but it isn’t something that is normally associated with high incomes.

“However, our results suggest that Type 2 diabetes patients in higher-paying jobs spend more time at work. This may lead to convenience becoming more important than proper nutrition.”

Both low-income and high-income earners face their own challenges, especially when dealing with diabetes, Maxwell added.

It appears that low-income earners appear to have budget constraints that may have them reaching for inexpensive processed foods, while those on high incomes grapple with lack of time to prepare wholesome meals, and rely on restaurant meals or pre-packaged processed meals instead. Many of these choices are high in fat, salt and/or sugar.

“Public health policies aimed at educating low-income diabetes patients in purchasing and preparing low-cost nutritious foods, such as more affordable cuts of meat, may help to improve or maintain health status of these people,” Maxwell noted.

As well, similar policies should exist for educating high-income patients who work long hours, in where and how to purchase, as well as how to prepare, time-saving diabetes-appropriate foods, in order to improve their diets, she said.

The study was funded by the University of Alberta’s Faculty of Medicine & Dentistry, the U of A Department of Rural Economy and Alberta Health Services, with additional funding from the University of Wisconsin - Madison Graduate School.