By working together and using simple and easily replicated protocols, research teams from around the world can contribute to solving big global questions. 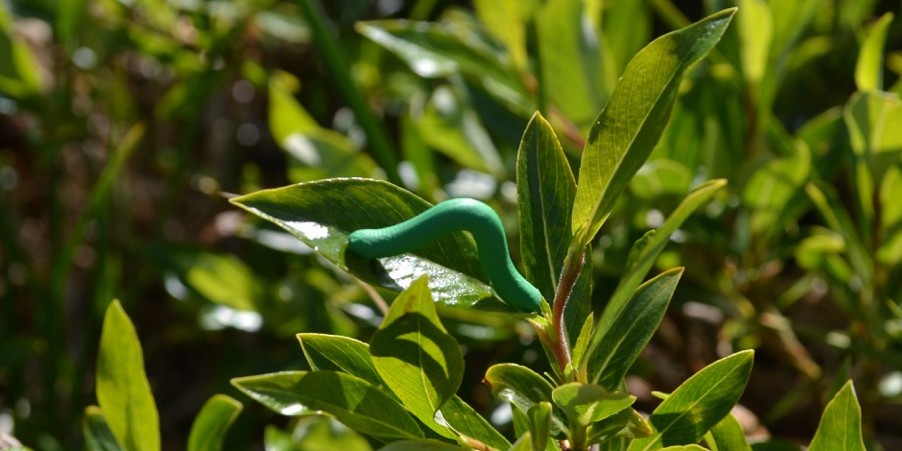 Researchers glued "dummy caterpillars" made from plasticine, a type of modeling clay, to common plant species in order to examine predation rates and patterns. (Photo by I.C. Barrio)

The best chance a caterpillar has to avoid becoming a meal is by living closer to the north and south poles or higher up on a mountain, new research shows.

Using decoy caterpillars made out of children’s plasticine, an international team of researchers, including biologists from the University of Alberta, found that a caterpillar close to the poles has only one-eighth of the chance of being eaten compared to a caterpillar at the equator. As well, caterpillars living on mountain-tops were much less likely to be consumed than their valley dwelling counterparts.

To measure local predation rates of caterpillars, researchers glued thousands of caterpillar imposters to common plant species to trick their predators—birds, small mammals and ants—into thinking the model caterpillars the real thing, only realizing they have been deceived when they had taken a bite.

Besides a better understanding of how ecological interactions among species change across these latitudinal and elevational gradients, researchers also found that the pattern was mirrored on both sides of the equator and moving up a mountain slope, suggesting a common driver could be controlling species interactions at a global scale.

U of A biology researcher David Hik and postdoctoral fellows Isabel Barrio and Erin Cameron rounded out a team of 40 researchers from 21 countries who examined predation rates along an 11,635-kilometre gradient from the Arctic Circle to southern Australia, and from sea level to over 2,000 metres.

The U of A biologists contributed observations from experimental sites located in alpine tundra in the southwest Yukon and aspen parkland near Cooking Lake—the only two Canadian sites in study. Hik said the predation rates at these sites fit the pattern observed globally suggesting that the role of predators in controlling caterpillars and other invertebrate herbivores can be predicted over diverse landscapes, and predation can potentially limit the number of herbivores, even in more extreme environments.

Hik added these sorts of elegant, collaborative and distributed experiments make it possible to understand changes across continents.

“By working together and using simple and easily replicated protocols, research teams from around the world can contribute to solving big global questions”, he said. “We hope that this approach will also help us better predict some of the potential impacts of rapid global warming in these environments.”

Barrio and Hik have been studying factors influencing patterns of invertebrate herbivory in tundra environments for several years as part of the Herbivory Network, hosted by the U of A.