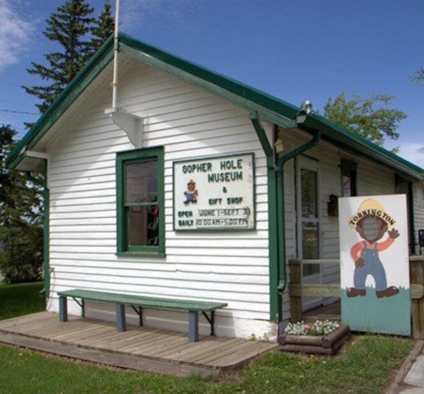 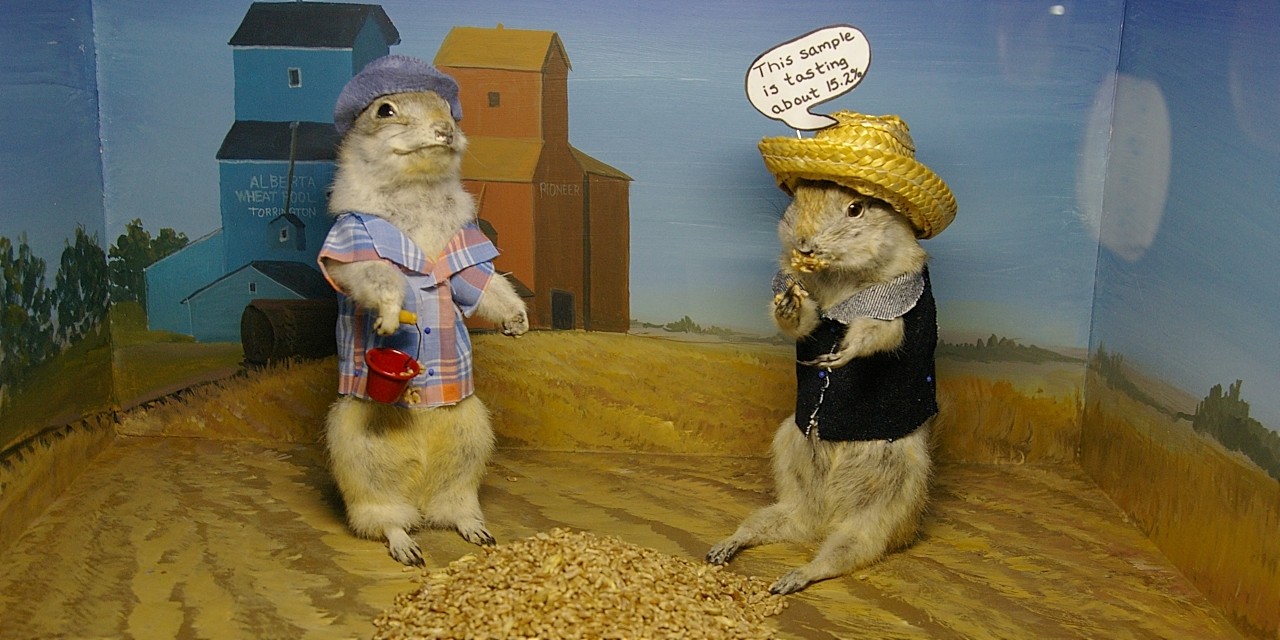 The offbeat slices of prairie life on display at the Gopher Hole Museum in Torrington, Alta., provide a rich glimpse into Alberta's heritage along with their humorous appeal, says a U of A museum expert. (Photo courtesy of Gopher Hole Museum)

What could be more irresistible than a display of stuffed gophers donning miniature costumes to represent scenes of rural life?

Heritage tableaux with taxidermied rodents might not be to everyone’s taste, but the Gopher Hole Museum in Torrington, Alberta—a hamlet of less than 200—manages to draw about 5,000 curious visitors each year.

Located in an unassuming double-wide trailer about 30 kilometres east of Olds on Highway 2, the museum houses 47 dioramas featuring a cast of 71 gophers, bringing to life such scenes as restaurant patrons in the local diner, a pastor preaching in church, musicians at an “Old Tyme Music Jamboree” or players engaged in a rousing game of curling.

The initial appeal is clearly humorous, but according to museum expert Lianne McTavish, this exhibit is far more than a mere joke. The University of Alberta professor of art, design and visual culture has seen some of the best museums in the world—and this one is her favourite.

"I finally made the trip to Torrington one year on the way back from the Calgary Stampede, thinking that since I was new to Alberta I needed to do these cultural things,” said McTavish. “I thought the museum was amazing.

“It is hilarious, but it's also historically interesting, collecting natural history material from the region. And it’s run and managed by rural women. I thought this was really in keeping with natural history museums stretching back to the 19th century.”

Beyond the obvious humour, the dioramas provide rich insight into prairie culture, she said, restaging “scenes of homesteading and civic events” as “part of a continuous Torrington tradition of do-it-yourself community organizing, hard work, adaptability and hospitality.”

McTavish calls the collection an “open text” allowing viewers to come up with their own interpretation.

“Some visitors find the scenes simultaneously creepy, weird and delightful, reinforcing stereotypes about rural life, while others portray them as the last gasp of a dying rural culture, and a few are ardent fans.”

It’s even inspired a new book McTavish is writing on Alberta’s 170 museums, paying special attention to the often overlooked and underappreciated collections, encouraging her to “take small-town and rural museums seriously.”

According to McTavish, these deceased gophers commemorate authentic historical settings—the pool hall, beauty parlour and restaurant from a bygone era, for example: “It's rural history and rural heritage."

But the collection also adapts with the times, adding new dioramas to reflect the hamlet’s evolution. One recent display, for example, celebrates a new business called Jesse James Coating Ltd., which moved into the remains of an abandoned school building in 2015.

From adversary to attraction

The Gopher Hole Museum first opened in 1995 with a $3,000 provincial startup grant to help small towns diversify and improve their economies. When the locals put their heads together to come up with a local theme, the answer was obvious—gophers.

For most of its history, the area has struggled to keep the population of these agricultural pests—also known as Richardson ground squirrels—under control to prevent them from destroying crops or breaking the legs of cattle and horses with their ubiquitous holes.

After the museum opened, an animal rights group protested the exhibit’s use of gopher corpses, asking that prefabricated models be used instead. The museum’s curator, Dianne Kurta, and other museum organizers responded with a postcard telling the group to “get stuffed.”

The resulting controversy went global in the media, attracting letters of both support and opposition from as far away as Germany and the U.K. But the attention also drew thousands of visitors to the museum in its first years. It has been featured often in the news ever since, even inspiring a short documentary film in 2015.

"It's a real success story,” said McTavish. "I needed to find out: why is it so popular, and why do people absolutely love it? When I mention it to people, they respond with joy.

“It plays a key role in the community,” she explained in an article in the International Journal of Heritage Studies, “upholding traditional values even as it offers a self-reflective critique of the cultural productions in which it participates, from the conventions of natural history and heritage museums to nostalgic recreations of childhood and rural life.”

The official visiting season is June to September, but McTavish said the museum’s curator is happy to open the museum anytime for anyone willing to make the trip.