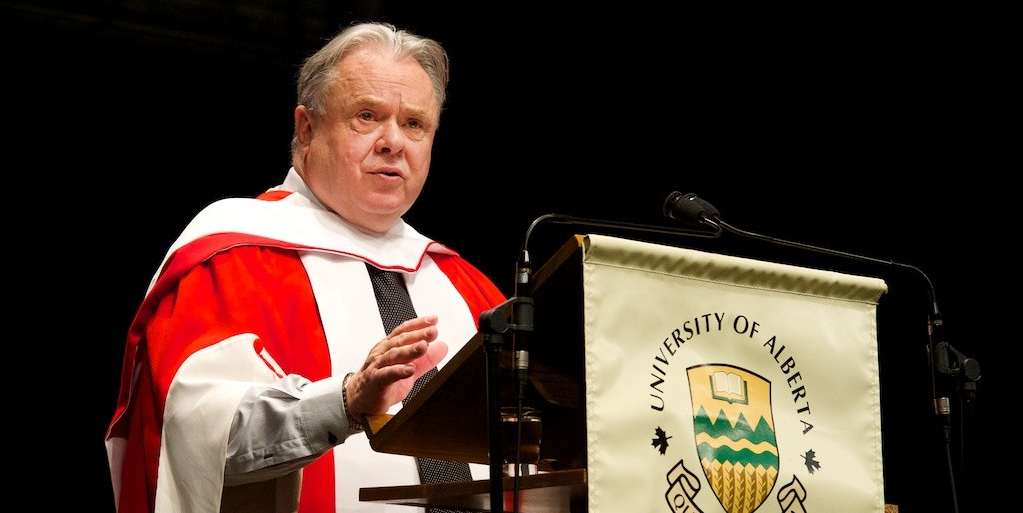 Bruce Saville delivers his convocation address to graduands of the Faculty of Nursing and the Faculty of Physical Education and Recreation June 11. (Photo: Richard Siemens)

(Edmonton) Bruce Saville has had considerable success in his life. By his own admission, some of it was luck and some from being at the right place at the right time, but most of his success he attributes to people he rallied around and who, in turn, rallied around him.

“Team is everything. Your family is a team. I can’t think of any employment situation that is not comparable to a team,” said Saville, local philanthropist and founder of Saville Systems, a software company that employed 1,700 people and developed and marketed billing solutions to the telecommunications industry worldwide before it was sold in the late ‘90s. “Surround yourself with good people—mentors, and those that you may mentor, co-workers, employees and even bosses.

“The better the people around you, the more success you will have.”

The importance of people was the overriding theme in a colourful “12-step program” convocation address Saville gave June 11 to the 2015 graduands of the Faculty of Nursing and the Faculty of Physical Education and Recreation.

The other 11 bits of advice included selling yourself, being enthusiastic, living a balanced life, exploiting your strengths but understanding your weaknesses and limitations, and treating others as you would have them treat you. He rounded out the list by extolling the virtues of loyalty, integrity, hard work, intelligence and leadership.

“You will all be leaders,” said Saville, who parlayed his success as a self-taught computer programming pioneer into a leadership role as an Edmonton community builder, a champion of education and sport, and an advocate for action on a long list of social issues, especially homelessness.

“You will all have an opportunity to lead. And all teams—whether they are sports teams, medical teams or families—need leadership.”

Invoking the memories of great leaders such as Sir Winston Churchill, Nelson Mandela, Jesus Christ and—a little closer to home—Wayne Gretzky, Saville explained there are different ways to lead, whether you’re the type who stands out in front leading the charge or directing from the back of the pack. Either way, he said, the world needs both.

To help illustrate the need for leadership, Saville quoted from a speech Robert F. Kennedy gave 49 years and five days ago at the University of Cape Town in South Africa.

“Each time a man stands up for an ideal, or acts to improve the lot of others, or strikes out against injustice, he sends forth a tiny ripple of hope.”