With up to 10 new designer drugs flooding streets every year, more education is needed to convey risks, especially among youth, say UAlberta researchers. 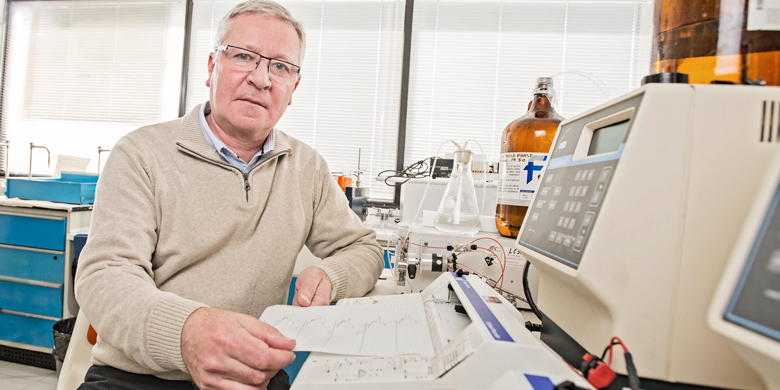 (Edmonton) In the span of a decade, Canada has gone from ecstasy importer to global supplier of the illegal party drug. At the same time, even newer designer highs—sometimes just a mouse-click away—are flooding the drug market faster than legislation can keep pace.

“The chemists who are making these drugs are coming up with about 10 new drugs per year; the legislation cannot keep up with the market,” said Alan Hudson, a pharmacologist at the U of A who studies how ecstasy and other drugs affect brain neurochemistry. “The best way forward is to educate people that they’re playing Russian roulette—the health risks from taking these drugs are high, and potentially lethal.”

In a new paper published in Drug Science, Policy and Law, Hudson and his U of A co-authors—Maggie Lalies, Glen Baker, Kris Wells and Katherine Aitchison—warn the recreational drug scene is growing in Canada, fuelled by an appetite for designer drugs and legal highs such as K2, spice, Benzo fury, Barts, Homers, bath salts, plant food and other “party pills.”

“This is a pressing public health issue,” said Wells, director of programs and services with the Institute for Sexual Minority Studies and Services. “The profile that we’re seeing of someone taking ecstasy or these so-called recreational drugs is not perhaps your average user when we think of drug use. It could be one of our own university students going to a party on the weekend—where they haven’t experimented before—and then take a tablet of ecstasy. It doesn’t have an effect and they take another one; pretty soon they’re in emergency fighting for their life.”

“For some of these legal highs, you only need a milligram to get high,” Hudson said. “If you can buy a kilogram for $200, the markup can be huge.”

Although Health Canada statistics show ecstasy use is down slightly among young people across the country, a 2006 report from the RCMP shows Canada has become a “major production and export country,” a situation that developed over just two years and a significant departure from the mid-1990s, when Canada was an import-consumer nation.

During the same time, Hudson notes, ecstasy has become increasingly toxic, cut with a mix of, at times, deadly chemicals. In a 2007 Health Canada study, only three per cent of seized ecstasy tablets contained pure MDMA, the drug’s main ingredient, compared with 69 per cent in 2001.

Two such contaminants are PMA and PMMA; the latter may cause severe serotonin toxicity and has been linked to as many as eight deaths in Alberta over the past two years. Hudson and his colleagues caution that even pure ecstasy can have toxic side-effects that vary by individual, due to genetic factors.

“There is no safe dose of ecstasy,” Hudson explained.

Head shops and online operators have increasingly turned to peddling legal highs such as BZP and TFMPP, often sold as “party pills,” “Barts” or “Homers” for shapes resembling characters from the Simpsons TV show. Both ingredients were declared illegal in 2012, but have given way in popularity to newer drugs such as “plant food” or bath salts, which have been sold legally as variants of mephedrone, methylone and MDPV—the latter of which is known for inducing a “zombie-like” state and paranoia.

The federal government banned the drug, but Hudson said there will always be others like Benzo fury and various online options to take their place, underscoring the need for more education.

Research grounded in the community

In their efforts to raise awareness, the research team has forged relationships in the community, including the Edmonton Police Service.

Wells co-chairs the Chief’s Advisory Council, a role that helped facilitate access to newer drugs for research, and his work at iSMSS puts him in constant contact with at-risk youth. Sexual and gender minority youth are three times as likely to take drugs and alcohol as negative coping mechanisms, he said, which underscores the importance of creating positive environments that help youth feel supported, and allowing them to make informed, hopefully healthy decisions.

“It’s about taking the research to the next level—communicating it, mobilizing the knowledge to all the stakeholders and, ultimately, to all those young people who may be facing a choice in their lives," Wells said.

When youth do turn to drugs, Hudson said, parents can turn to resources offered by  Alberta Health Services and look for warning signs such as

This U of A research was funded by the Canadian Institutes of Health Research and the Government of Alberta.