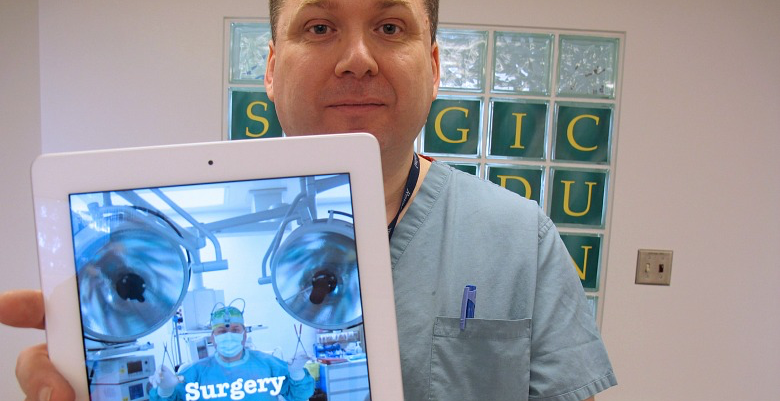 (Edmonton) Jonathan White, professor of surgery at the University of Alberta, has been named a 2014 3M National Teaching Fellow. White is the 41st U of A professor to receive the fellowship, adding to the university’s Canada-leading total of 3M Teaching Fellows.

“It’s my job to help students see behind the surgeon’s mask and inspire a wider range of students to learn about surgery,” White said. “I want to show learners that surgeons are made, not born. You don’t have to have a certain kind of hands or a special sort of heart. I’m trying to tell students that I’m an ordinary guy and if I can become a surgeon, maybe they can do the same—and they might be really good at it.”

As the senior director for undergraduate education in the Department of Surgery and the Tom Williams Endowed Chair in Surgical Education, White teaches students at all stages of their education. He gives lectures to first- and second-year medical students, runs the first-year shadowing program, teaches the third-year course on general surgery and founded the summer student research program in surgery. He also teaches a master’s-level course on assessment and program evaluation, and works with residents in the general surgery residency program.

Since assuming the senior director role in 2007, he has developed new curriculum and assessment techniques for the third-year general surgery course and the fourth-year course in specialty surgery, which he also taught for five years.

But it’s his work outside the classroom that has made White a bit of a celebrity in the world of surgical education. In 2008, he recorded a few podcasts on basic surgical concepts that he called Surgery 101. After they were posted to iTunes, the podcasts quickly gained popularity in an unexpected way: medical students in Brazil, Germany and China enjoyed them as much as U of A students did. The next step was to create the Surgery 101 app, which is available for iOS, Android and Windows Mobile.

The app now has nearly 150 episodes with topics ranging from basic anatomy to neurosurgery, and boasts more than 1.2 million downloads worldwide. White says he couldn’t be happier—he not only helps medical students in more than 170 countries prepare for rounds and exams, but also gives U of A students a chance to work with surgical specialists to create podcasts on topics that align with their interests. The recent transition from podcasts to video podcasts, or vodcasts—with engaging pop culture themes like Lego and the Muppets—leaves thematic possibilities wide open.

“It shows you a slightly more human side of surgery. You get the idea that surgeons are this, that and the other, but we’ve made them slightly silly by making them Muppets,” he said of the first vodcast, Muppet Surgery. “It means you can talk to them a little bit and understand what it is to be a surgeon.”

Showing the human side of surgery is a challenge he faces each day. When White is standing in front of the lecture hall, it’s not uncommon to see first- and second-year students dressed in surgical caps and masks. He hopes getting behind the mask will help break down some of the stereotypes about surgeons. Another of his favourite approaches is encouraging students to share their experiences through reflective writing and narrative. It also gives him an opportunity to share a few stories of his own: his life as a cancer surgeon has allowed him to share in many stories of transformation and courage, which he hopes may inspire his students.

Even in his master’s-level course, he still livens up the material with a little music.

“For the final week of my master’s class, I brought in my ukulele and, in front of the dean of education, performed a song I composed about assessment. It was to the tune of The House of the Rising Sun. I think it sounded mostly OK,” he said with a smile.

For White, one of the most rewarding parts of teaching is when students discover concepts on their own. In his third-year course, he sends clinical problems to the students beforehand so they can discuss the application of solutions they’ve worked out on their own. At the end of each class, he asks the students to tell him one thing they’ve learned.

“Usually each student has learned something different, and sometimes it’s something unexpected,” he explained. “I get a real buzz off of that.”

White will officially accept the award at a conference in June.