Surprise! There’s sugar in that

Plus 4 other (bittersweet) truths about everyone’s favourite flavour. 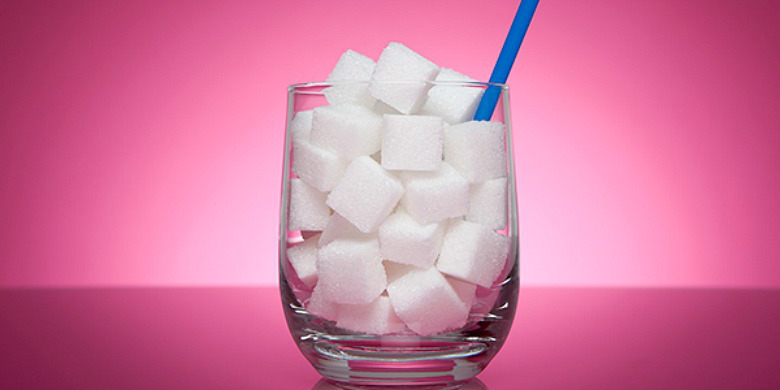 Sugar is the most powerful taste, if music is any guide. It’s linked with love for Mick Jagger, Raekwon, Muddy Waters, Iggy Pop and countless others. It helps Tchaikovsky’s fairies to dance. Mary Poppins tells us a spoonful helps the medicine go down.

But sugar attracts misconceptions as readily as the attentions of songwriters. And while the World Health Organization has yet to issue any official guidance on safe levels of exposure to Mr. Jagger, this is not the case for sugar.

Here are five sweet misunderstandings about sugar (some of which you probably don’t want to know).

1: Sugar alone is not bad for your teeth

“If you took a sterilized tooth and threw it in a beaker filled with sugar water, nothing would happen,” says Ava Chow, ’05 Dip(DentHyg), ’10 PhD, an assistant professor of medicine and dentistry at the University of Alberta. “It’s when you add natural bacteria to the mix that things start to get funky.”

Oral bacteria like Streptococcus mutans produce tooth-harming acids as they digest sugar in our mouths. It is these acids — not the sugar itself — that break down our teeth.

One important implication is that the amount of time sugary food lingers in your mouth plays a big role in how much damage your teeth sustain. The longer a sweet food sticks around (yes, that was a pun), the worse it is for the health of your mouth. If you’re going to consume a sweet treat, it’s best to eat it quickly.

2: All added sugar is created equal — sort of

Pentahydroxyhexanal — the name for glucose under the International Union of Pure and Applied Chemistry system — looks like a health hazard to pronounce, let alone consume. By comparison the word “honey” is easy to say and soothing to think about. Surely consuming honey is somehow healthier than sucking back perilous pentahydroxyhexanal.

“Sugar is sugar is sugar,” says Chow. Just the way purified water from an ocean or river is the same, sucrose is sucrose whether it began life in sugar cane, sugar beets or a honeycomb.

Rhonda Bell, a nutrition researcher and diabetes expert at UAlberta, agrees. “We want to decrease the intake of added sugars, no matter where they come from,” says Bell. This includes “natural” places like honeycombs or the stevia plant.

But while honey has no more nutritional value than table sugar, some sugars taste sweeter than others. According to Bell, this can influence how much sweetener people use and therefore how much sugar they consume.

“Of the monosaccharides that we eat, fructose is the sweetest,” says Bell. “Honey has a high proportion of fructose, so people tend to add less honey to food than table sugar.”

Those looking to reduce their sugar consumption usually know where to start: sweetened beverages, candy, ice cream, chocolate and so on. Cutting sugar-rich foods is an important step. But sugar, much like Batman, lurks where least expected.

“One place where the food industry has chased consumer taste, so to speak, is by adding sugar into lots of foods where we wouldn’t normally have sugar,” says Bell. Many commercially processed foods like tomato sauce, crackers, salad dressing and even multigrain cereal contain added sugar. Ceaseless vigilance is required to avoid it.

An infant has about twice as many taste buds as an adult human, says Chow. As we age, we lose buds. The exact process behind this is not yet understood but the consequences are clear.

“Kids taste things much more intensely than adults,” Chow says. “Foods are much sweeter to them than an adult.”

For that reason, Chow and her dental colleagues discourage parents from exposing children, especially infants, to sugary foods. If they develop a taste for that intense sweetness, they may be prone to adding large amounts of sugar to their food later in life in pursuit of that sweet, sweet nostalgia.

Trying to balance a sweet tooth with long-term health can lead to a lot of what-ifs. What if I brush right after I finish eating candy? What if I get lots of exercise to burn off the sugary calories?

Paying the wages of candy with gym time might avoid the weight gain that caloric excess can bring. But Bell says it’s still a long way from undoing the nutritional harm that sugar can do.

“Sugar is metabolically such that it promotes fat deposition,” she says. “People who have a higher intake also see an increase in lipid synthesis and blood pressure.” Lipids are another word for fatty acids. The good ones are essential for good health, but the bad ones contribute to many chronic diseases such as cancer, obesity, heart disease, degenerative and inﬂammatory arthritis and osteoporosis.

If this is a bitter pill to swallow, take heart: scientists have yet to come out in force against listening to sweet music. Your Mick Jagger habit, for now, is safe.

Ava Chow is an assistant professor in the Faculty of Medicine & Dentistry. Her research includes the impact of oral inflammatory disease on the cardiovascular system, intercellular communication, and preventing the staining of teeth by tea.

Rhonda Bell is a professor in the Department of Agricultural, Food & Nutritional Science, where she leads a team examining the role of nutrition in health as well as the prevention and treatment of diabetes. She is also involved in a range of other research initiatives studying and promoting healthy eating.

We at Thought Box welcome your comments. Robust debate and criticism are encouraged, provided it is respectful. We reserve the right to reject comments, images or links that attack ethnicity, nationality, religion, gender or sexual orientation; that include offensive language, threats, spam; are fraudulent or defamatory; infringe on copyright or trademarks; and that just generally aren’t very nice. Discussion is monitored and violation of these guidelines will result in comments being disabled.

Surprise! There’s sugar in that
Newsroom