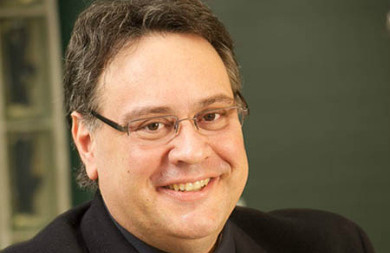 (Edmonton) Strictly speaking, it was entirely an accident. But what began unexpectedly three years ago in Evangelos Michelakis’ lab at the University of Alberta may actually prove that the common belief—we are what we eat—is true.

“What we discovered is a new way of linking metabolism to gene regulation—in other words, how the cellular machinery used to generate energy can also be used to regulate our genes,” explains Michelakis.

Michelakis and his research team in the Department of Medicine were studying an enzyme that produces energy in the mitochondria, the cell’s powerhouses. The enzyme is called pyruvate dehydrogenase complex (PDC) and was thought to only reside in mitochondria. Unexpectedly, the researchers found it to also be in the nucleus, the cell’s “operations control centre,” where DNA resides. PDC in the mitochondria breaks down sugars from one’s diet to produce a molecule called acetyl-CoA, which is used for energy production. But acetyl-CoA is also known to be important in the regulation of DNA through the activation of specialized DNA regulating proteins, called histones, in the nucleus.

According to Michelakis, what they found took them all by surprise.

“We wanted to study PDC and acetyl-CoA levels in the mitochondria because that’s where we thought they were. But we also had the nuclei isolated at the same time and we found PDC in the nucleus as well, which caused us to ask, ‘what is that doing in there?’

“Three years later, we have discovered that PDC can actually be critical for the regulation of histones through the production of acetyl-CoA in the nucleus”, says Gopinath Sutendra, a postdoctoral fellow in the Department of Medicine and the first author of the study. This new work shows how the same machinery that is used to make energy from carbohydrates (sugars) in our diet can also be used to regulate genes in our DNA. A balance between the amount of PDC in the mitochondria or the nucleus may actually determine whether the sugars we eat will be used to make energy or activate our genes or replicate our DNA.

The findings of the research team are at the heart of the cell’s most important function: the regulation of DNA. The results could have important implications for the future treatment of many common diseases like heart failure and cancer.

“Our findings may lead to multiple drug discoveries, as we discovered a new way by which metabolism is linked to DNA regulation, an area of very active research for drug discovery in numerous diseases,” the researchers say. Michelakis adds that future research must identify ways of preferentially affecting PDC in the nucleus and not the mitochondria, or vice versa.

The work is published in the July 3 issue of the journal Cell. Michelakis says he is particularly proud of the fact that this is the product of a team that is entirely based at the U of A. Many young researchers in the Department of Medicine like Adam Kinnaird, Peter Dromparis and Roxane Paulin were critical members of the team that also included technicians (Trevor Stenson, Alois Haromy, Kyoko Hashimoto) and researchers from the NanoFAB facility (Nancy Zhang, Eric Flaim). The work was funded by the Canadian Institutes for Health Research and the Hecht Foundation.