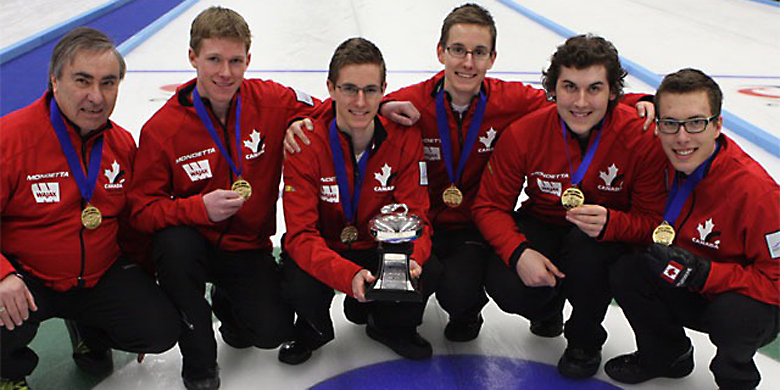 The Edmonton-born skip needed only eight ends to wrap up Canada’s first junior men's world title since 2007. The Alberta-based team, which won the Canadian junior title in February, is made up entirely of university student athletes from the Golden Bears curling program, which trains out of the Saville Sports Centre on the U of A’s South Campus. The team is comprised of Bottcher, third Evan Asmussen, second Landon Bucholz and lead Bryce Bucholz.

Sweden made it a two-point game with a single in the sixth end, but Canada put the game away with five points in the seventh.

Afterwards Bottcher said “it feels just amazing to be world champion. We’ve been curling all our lives to have a chance at something like this, and it’s amazing to have gotten here and to win it. We were ahead on the scoreboard, and then in the seventh end we got it done, so that was good. My team set up the seventh end great. (The Swedish skip) didn’t have a whole lot, and he was just a hair heavy on his last one and left me a shot, and I was fortunate enough to make it.”

Speaking more generally Bottcher said “this team has been amazing and they’ve made my job easy. This means that a lot of work we’ve put in this year, and in years past, has paid off for us.”

It has been a whirlwind month for Golden Bears curling, and for Bottcher in particular. On Feb. 12, the team was busy winning its first Canadian junior title in Napanee, Ont., and then Bottcher skipped the Golden Bears senior team to a Western Regional Qualifying tournament victory Feb. 18 in Winnipeg. The junior team then arrived in Sweden on March 5, won the championship on March 11, and now Bottcher will fly into Toronto, rest for a day, and make his way to St. Catherines, Ont. to lead the Golden Bears senior team, comprised of Mick Lizmore, Brad Thiessen and Karrick Martin, in the CIS/CCA championship tournament, March 14-18 at Brock University.