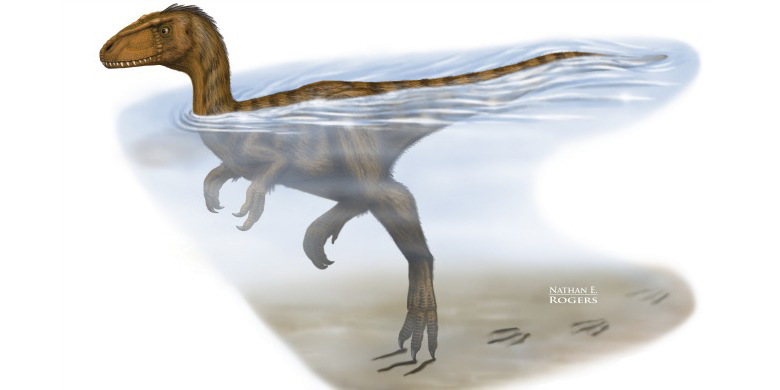 130408-swimmingdino-banner
Leaving evidence in its wake: Artist's rendering of a carnivorous two-legged dinosaur swimming in a river, making claw marks as it touches bottom with its tiptoes. (Illustration: Nathan E. Rogers)

(Edmonton) Dinosaurs are long extinct but their role in understanding life on Earth in the 21st century is vital, says a dinosaur researcher at the University of Alberta.

“Humans have been around for about 200,000 years; dinosaurs ruled for Earth for 160 million years,” says U of A paleontologist Scott Persons. “From dinosaurs we’ve learned about colour vision in some of today’s animals, and the ancient animals are linked to the evolution of other life we take for granted, like birds and flowering plants.”

Persons’ latest PhD research has produced some of the strongest evidence ever found that dinosaurs could paddle long distances. Persons arrived at that conclusion after examining unusual claw marks on fossilized rocks found in China.

Persons’ swimming-dinosaur study involved working with an international team of researchers in China’s Szechuan Province. Persons determined that a series of claw marks found in now well-known dinosaur tracks were left by the tips of a two-legged dinosaur’s feet.

“The dinosaur’s claw marks show it was swimming along in this river and just its tiptoes were touching bottom,” said Persons.

The claw marks cover a distance of 15 metres, which the researchers say is evidence of a dinosaur’s ability to swim with co-ordinated leg movements. Persons says the tracks were made by a carnivorous, two-legged dinosaur he estimates to have stood roughly one metre at the hip.

The research was conducted with a team of paleontologists on the ground in China, but Persons says he and his fellow U of A dinosaur hunters don’t have to go far afield to make important discoveries—one of the reasons he decided to study at the university.

“I don’t even have to leave the Edmonton city limits, and when I do, the fossil treasure trove in the Alberta badlands is less than a day’s leisurely drive away,” said Persons.

Persons and his colleagues from the Szechuan Province fossil site will continue to analyze the dinosaurs’ swimming prowess with hopes that it will yield evidence related to today’s animals. In the meantime, Persons offers a few links paleontology has already established between life on Earth 65 million years ago and today.

“Want to know why our pet dogs or livestock have limited colour vision? It’s because early mammals sacrificed cones for rods in their eyes so they could see better in the dark and better avoid dinosaurs.

“Want to understand the widespread success of modern flowering plants? Well, they evolved under the selective pressures of herbivorous dinosaurs.

“Want to know where birds come from? Dinosaurs.”

Persons was a co-author on the research, which was published April 8 in the journal Chinese Science Bulletin.